What would Jane Jacobs do?

To mark what would have been Jane Jacob’s centenary, Jane100 is a year-long celebration inviting you to attend an event that brings Jane’s ideas to life - be it a book club, a block party, a film screening or a day of community design. From May 2016 to May 2017, Jane100 will animate Toronto with 100 events that will engage citizens in dialogue, action and the spirit of Jane. What will you do?

You can ask me what will I do and I’ll tell you that I went to the World Premiere of Matt Tyrnauer’s gripping new documentary “Citizen Jane: Battle for the City” today! It was screened as part of TIFF (Toronto International Film Festival) at what was her neighbourhood cinema, the Bloor in the Annex.

“What brought me to the story was Jacobs,” Tyrnauer told Variety. “She was a bad ass who used the power of the pen and the force of her intellect in a brilliant and heroic way that was way ahead of her time.”

Along with this somewhat passive activity albeit it got me worked up, this year my passion project with Amanda Lewis aptly named The Reading Line celebrated Jane100. We took inspiration from this extraordinary woman for our #BookRide called Books On Bathurst. It was like a Jane100 but on two wheels! 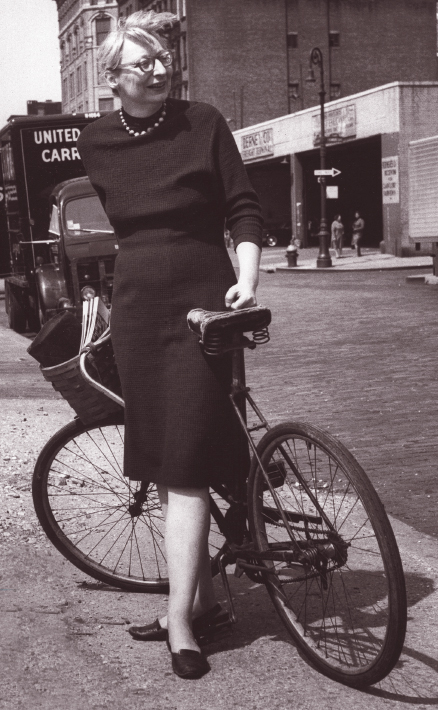 I am so proud to work for the Canadian publisher of Jane Jacobs and have as my partner in The Reading Line, Amanda Lewis - editor extraordinaire who worked on the new Jane Jacobs’ book called Vital Little Plans: The Short Works of Jane Jacobs, available October 11, 2016. The book is divided into 5 parts and follows her chronologically as a writer and a thinker. It includes a poem she wrote, excerpts from her books, articles, conversations, interviews AND an excerpt from her unpublished manuscript.

I asked Amanda about the cover treatment for this new book and she said it’s a representation of a city grid and also hints at systems thinking. Jane would examine a city block and ask “What makes this city block work? What makes a city work?” Jane looked at successes when others looked at failures.

Amanda told me that this collection of short works is ideal for new readers of Jane Jacobs—like me! It’s interesting that we all think we know who and what Jane stood for and use phrases like “What would Jane Jacobs do?” but in reality no one knew because she frequently did the unexpected.

Nathan Storring, one of the editors of Vital Little Plans. Storring is also a communications associate with Project for Public Spaces and a curator with a focus on interpreting architecture, city planning and other urban topics for the general public. He suggests that we get out on the street, talk to each other, and hash out new ways to live together in these dense, wondrous, unwieldy and unfair places we call cities.

Melville House Books continuing series THE LAST INTERVIEW now includes Jane Jacobs. The last recorded interview was from May 2, 2005. The collection of conversations brilliantly illuminates her writings on urban life, economics, and politics along with her personal commitment to activism.

There’s more! The first major biography on Jane Jacobs called Eyes on the Street: The Life of Jane Jacobs by Robert Kanigel will be available September 20th, 2016. Make sure you open the book to see a map of Toronto on the endpapers. it’s a beautiful edition with lots about her time in Toronto (she did live here for 40 years!)

In the spring of 2016 I visited the JANE AT HOME exhibit described as “The ordinary life of an extraordinary woman.” curated by Jane’s son Jim Jacobs and Caitlin Broms-Jacobs at the Urbanscape Gallery at 401 Richmond, where the Spacing Store is located. I’m sorry to say that the short-run exhibit closed, as it was so insightful.

Jane Jacobs encouraged us to stay engaged with our community, whether it’s a big city or a small town.

WHO WAS JANE JACOBS? is a list I pulled directly from Jane100 as it’s a great reminder of what Jane Jacobs believed in and gave to us:

I was reflecting on when I first heard about Jane Jacobs. It was on a Jane’s Walk in my neighbourhood probably 8 years ago. The walk was led by a local activist and historian - Madeliene - who took the group north on Jane Street and stopped us near Weatherill. She pointed at a large tree which was growing next to the sidewalk. She said it was here when the Carrying Place Trail went along the Humber River over 260 years ago. She is its unofficial guardian and ensures that it is kept safe. I’ve lived in this area for over 20 years and never knew that!

Jane100 number 1300 walks (2015 data) in 189 cities across 6 continents and will continue to grow as it is about ordianary people sharing what they know about their community. She said “every perspective is important to building a vibrant and healthy city.” It’s a community based approach to city building!

I had the opportunity to talk about Jane Jacob’s on Global TV The Morning Show in May 2016, here it is.

I hope that I’ve inspired you to read something Jane Jacobs wrote or go on a Jane’s Walk this year to celebrate Jane100.