If music be the food of love

The 7th annual Toronto Bicycle Music Festival was perfectly tuned to the environment. Similar to an interesting arrangement, there were all kinds of terrain and weather for the day! As they say in Halifax, just wait 5 minutes and the weather will change.

I live in the west end of Toronto so I began my journey east to the Evergreen Brick Works at 10 am. I brought and ended up wearing my Cleverhood that I purchased (I think of it as an investment as I ride in all weather & this is expensive) at the Spacing Store in the spring. Little did I know that I would receive multiple compliments on the styling of my Electric Houndstooth Rain Cape. One of the details that I love best about this rain cape is its hidden reflective thread. Plus it’s breathable unlike my rain jacket that I can’t wear on a hot day. 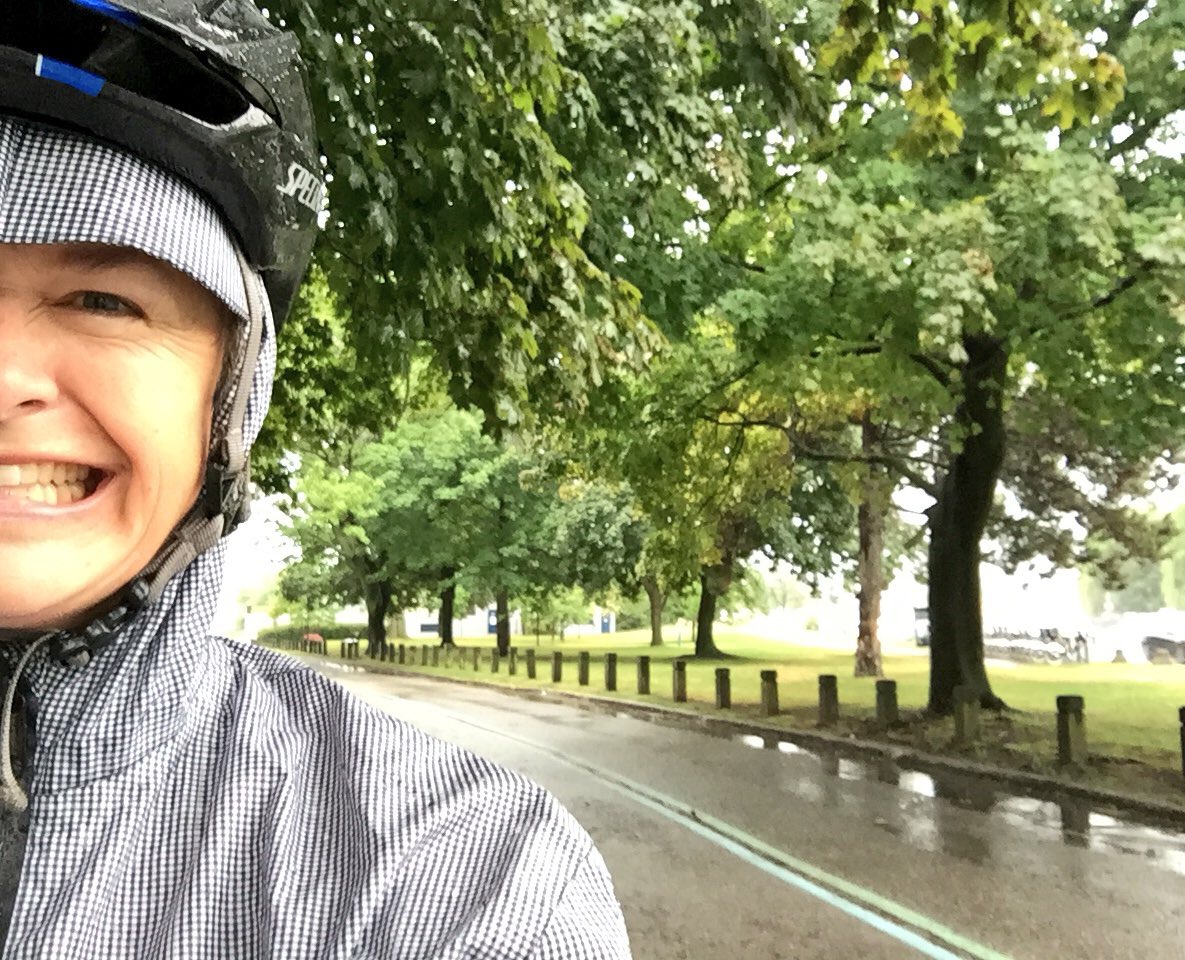 The year-round and largest Farmer’s Marketin Toronto was still in full swing at the Evergreen Brick Works at the start of the Festival which meant a lot of people under the roof but also a full parking lot of cars. This proved problematic when the group exited the site.

But first the music that made the rain stop! There were two bands that began the set with music that you could not help but dance! Toronto’s YUKA and the Heavyweights Brass Band complete with a TUBA, were both fantastic! 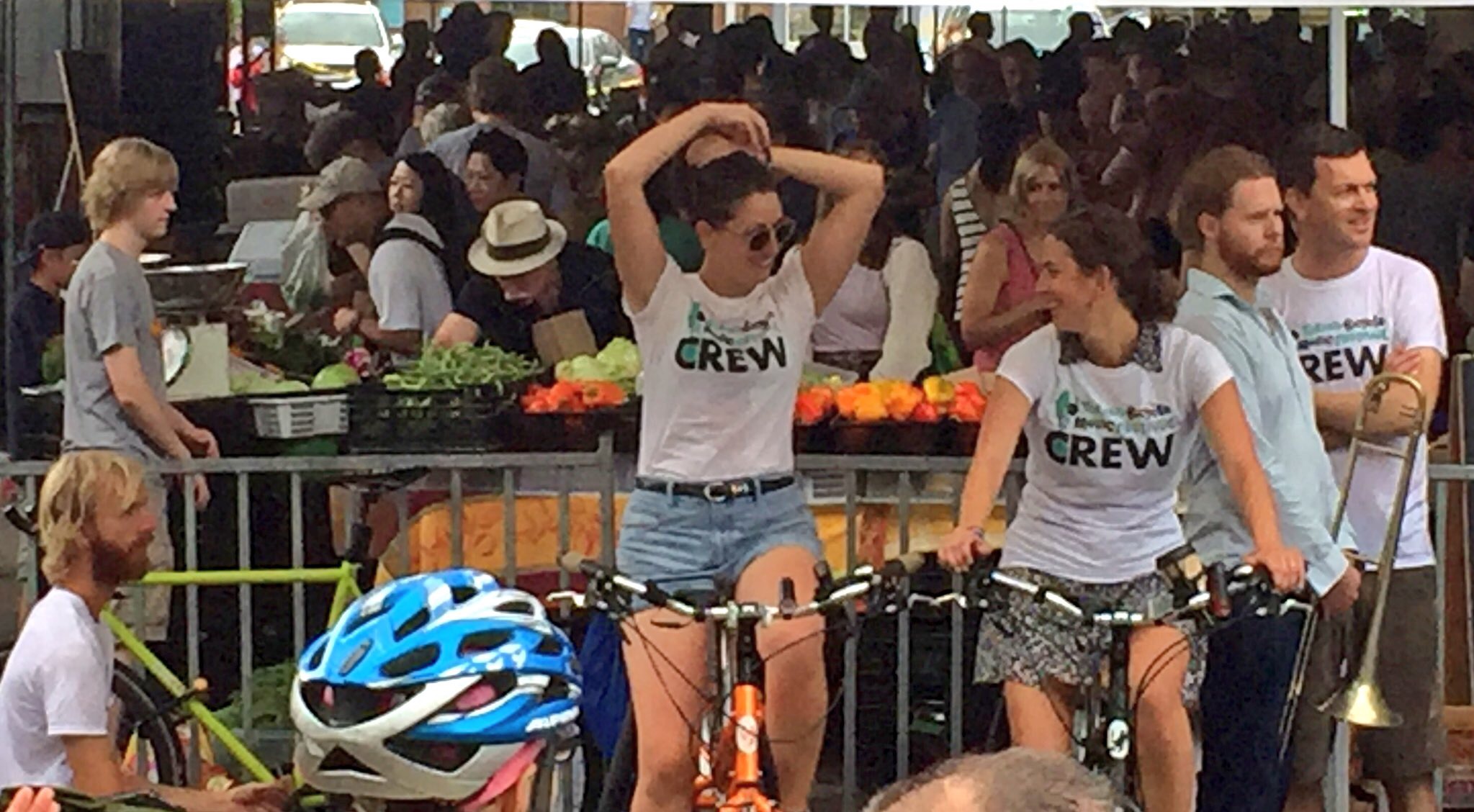 Did you know that this festival’s sound system is powered by PEDAL POWER. Isn’t that amazing. Two bicycles provided enough power for the bands to be heard loud & clear!

There are more and more companies using simple pedal power like Chocosol to the Bike Blender. I’d love to be able to hook up my phone charger to my bicycle and recharge as I pedal AND guess what - they are available! I just have to buy one now that I’ve said I’d love one.

These simple inventions remind me of my local bicycle shop which is Hoopdriver Bicycles. It’s owned by Martin Neale aka MacGyver. He has a design sense and a technical knowledge to make anything impossible possible. And don’t you just love their store’s mission statement: “put people on the road to joyful and responsible transport.” Isn’t that pitch perfect?

Back to the festival … at noon we gathered and waited while the gear was loaded to be transported on bicycles on the group ride to Scarborough. On route there was a mobile performance by the Juno nominated singer-songwriter and multi-instrumentalist - the one & only Annabelle Chvostek. She was amazing as she continued singing and playing her guitar during what was a bumpy & wet ride along the Don River Trail. I hadn’t traveled along this section of the trail for probably twenty years so it was great to see it with fresh eyes.

The route from the trail to Prairie Drive Park included some side streets until we reached Pharmacy Avenue in Scarborough. I have to say I’ve never cycled in Scarborough! It wasn’t as bad as I imagined albeit I was in a group of 100+ cyclists all taking the lane.

By this time, the clouds had cleared and the heat was turned up aided by Nhapitapi and the Girls Rock Camp. What a great scene of music, people and bicycles!

If music be the food of love, play on; Give me excess of it, that surfeiting, The appetite may sicken, and so die.”

Music plays an important in the plays of Shakespeare and is often used to carry the plot. The quote above is spoken by Orsino because he is frustrated in his courtship of Countess Olivia. He muses that an excess of music could cure his obsession with love as eating removes your appetite for food.

I was thankful that not only had the Toronto Bicycle Musical Festival provided an ongoing musical program but there was food to satisfy my hunger! The Festival had three food vendors on hand including my favourite from the west, The Dovercourt Village Pizza Company who brought two kinds of delish za! BUT by three o’clock I had run out of steam. I had cycled 24 KM and still had to get home. My hardworking friends at Scarborough Cycles suggested a route for as I didn’t want to go back the same way. So I put on my sunny cloak of confidence and cycled south on Pharmacy Ave, west on Danforth and south on Victoria Park Ave which was originally a pioneer road for the settlement of Scarborough. This took me to Queen Street East and access to the Martin Goodman Trail which was named in memory of the former President and Editor-in-Chief of the Toronto Star who passed away in 1981.

I love cycling alongside Lake Ontario but it was NOT tranquil that day as the wind had increased and a storm was a brewing along with the heat! 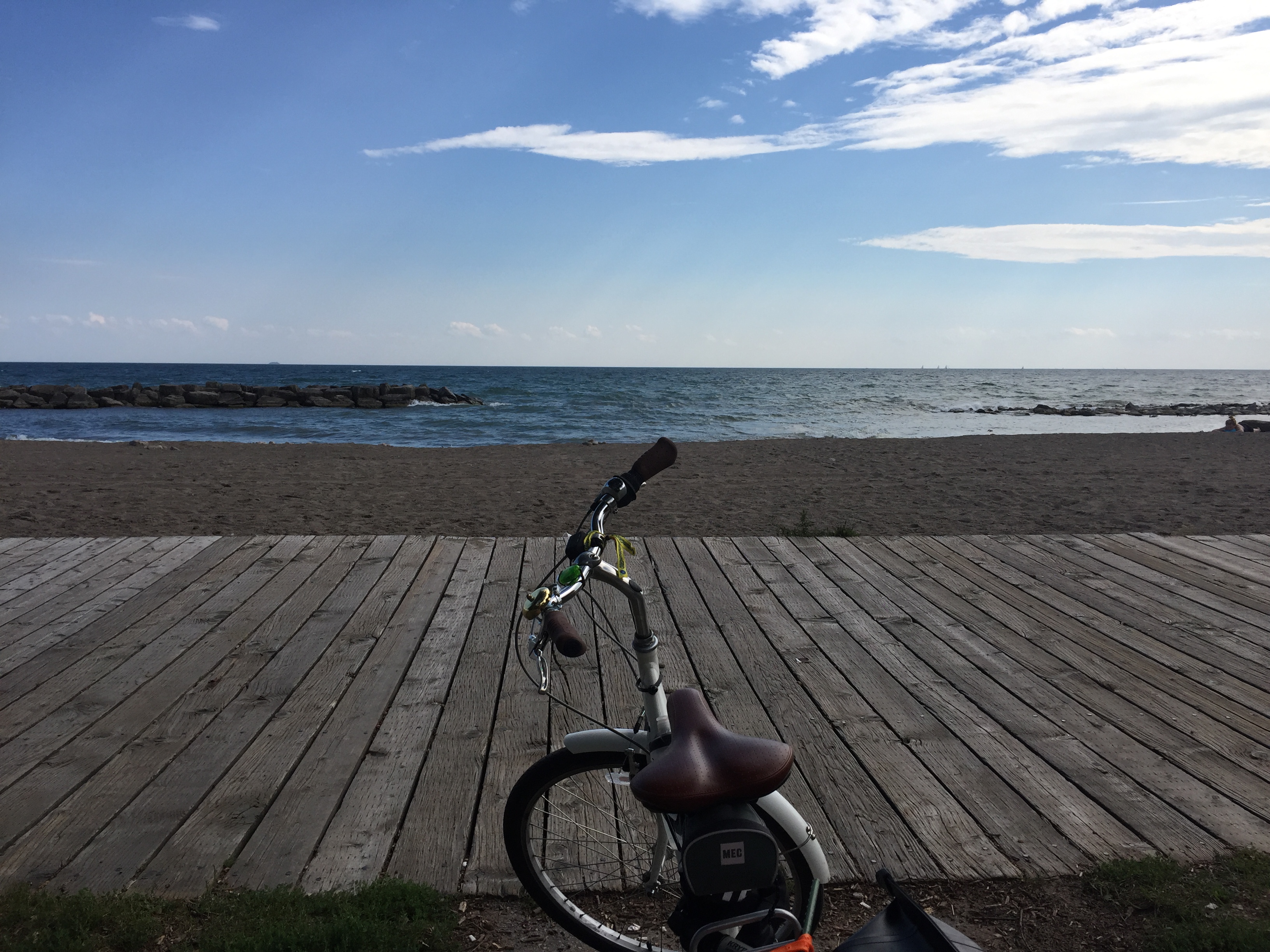 I have to share a fun moment. I was so hot. I was so tired. I was on Lakeshore Blvd at Leslie Street and I saw the Starbucks. I wanted a double chocolate chip frappuccino. I didn’t see any bicycle parking so I did the next best thing, I drove through the Drive Thru on my bicycle. The barista complimented me on my bicycle and gave me my cold refreshing restorative frap! This got me home for a total of 52 KM cycled today from 10-5.

At the end of the day I picked up Alan Cumming’s You Gotta Get Bigger Dreams, My Life in Stories and Pictures published by Rizzoli. I just wanted to escape into his mischevious, tender and whimsical photos and naughty stories of his life.