Books and brunch with Ben 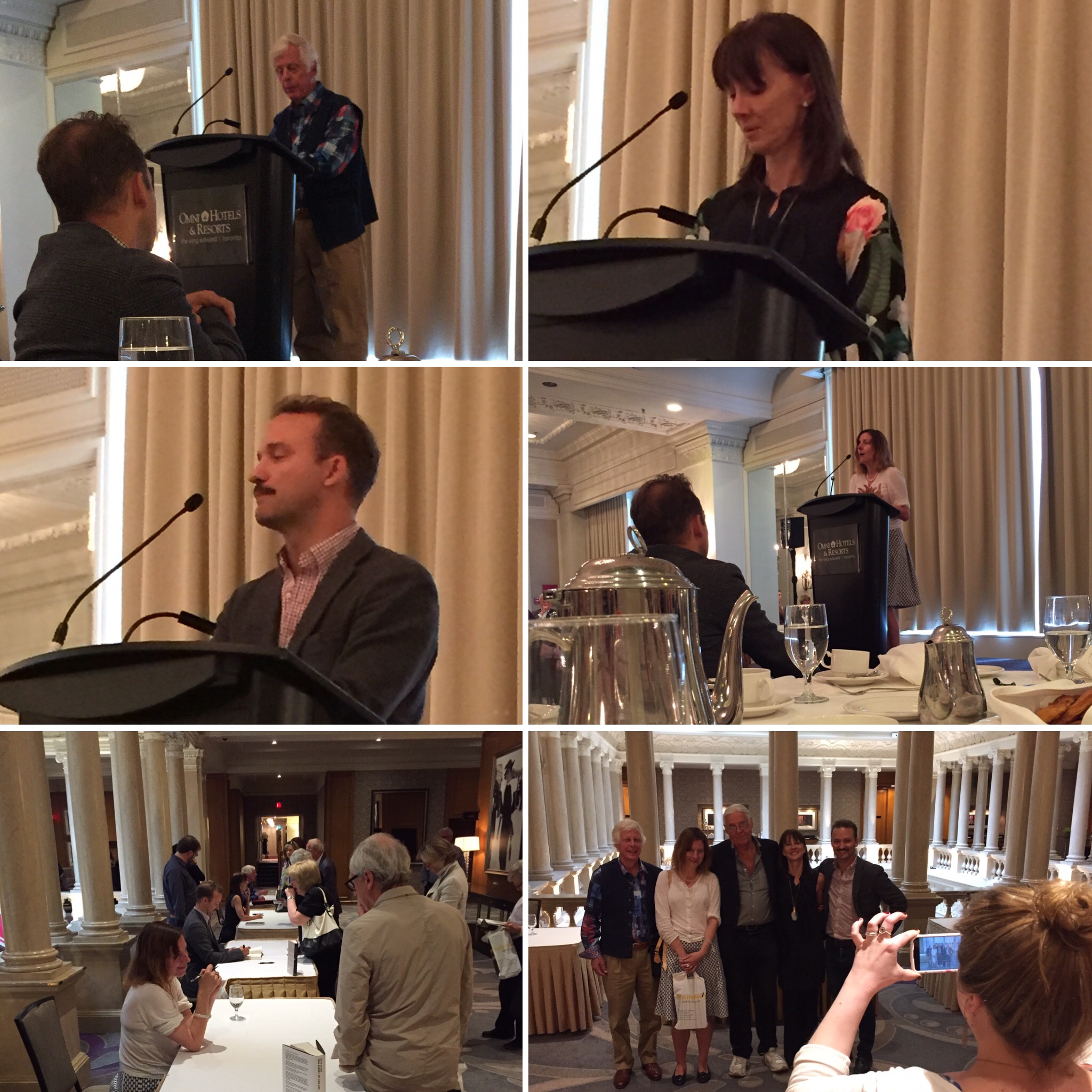 It’s truly embarrassing that I have never attended a Ben McNally books & brunch before! Where have I been since 1998?! Oh. Okay I was a mom of a little boy for many years so there’s one reason. But my life has now changed since attending the September edition.

Because I was the official guest of Dr. Ruth Scurr which meant that I sat at the Authors’ Table which is far better than a grown-up table at Christmas. 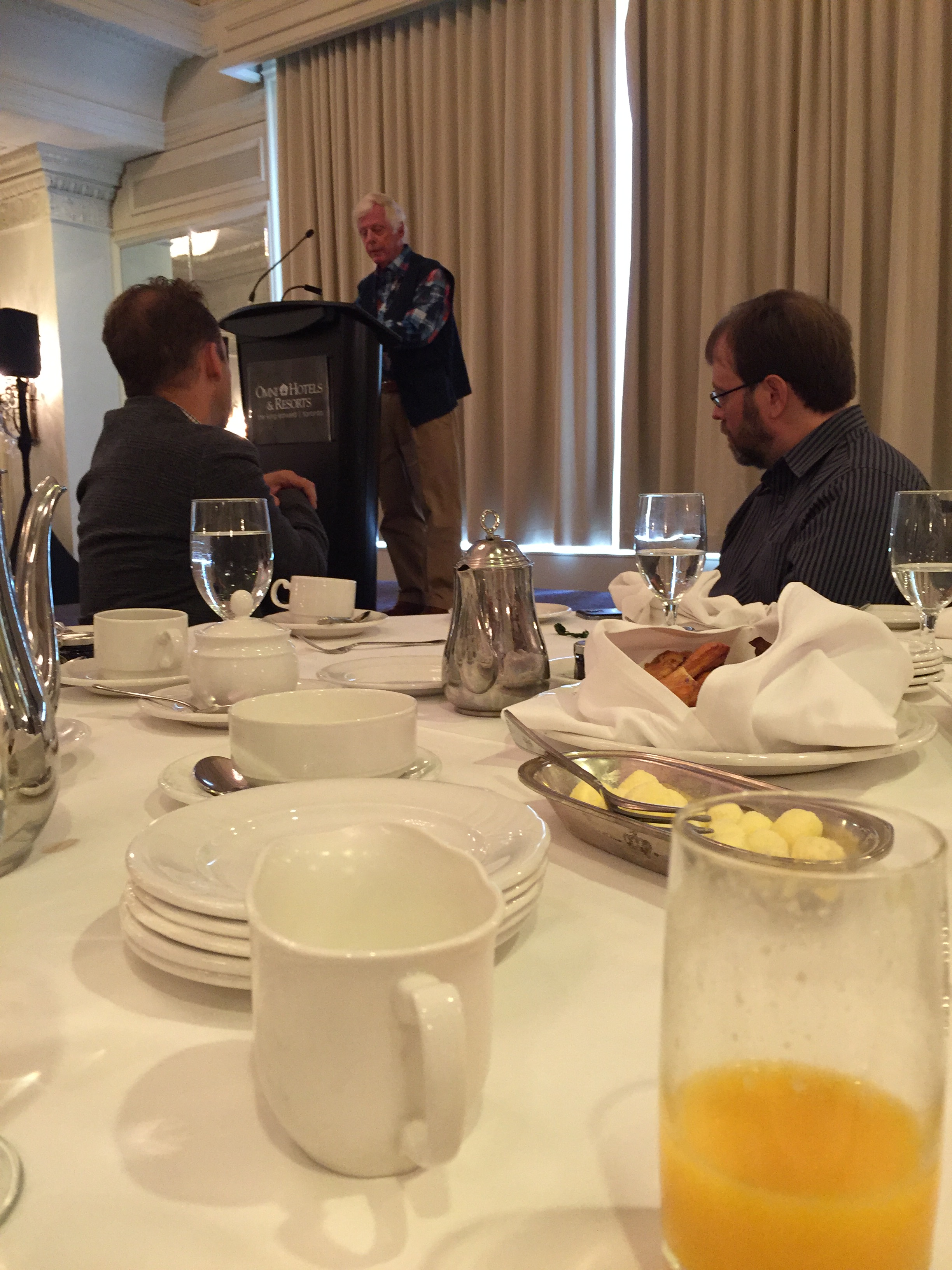 J. Edward Chamberlin author of The Banker and The Blackfoot, A Memoir of My Grandfather in Chinook Country.

Ted (all his family have nicknames) and his wife, the poet Lorna Goodison, flew in from Halfmoon Bay in British Columbia. I immediately asked WHERE is Halfmoon Bay?!

Halfmoon Bay is a small community of about 2,800 people. The area in and around Halfmoon Bay was originally inhabited solely by the Shishalh people of the Coast Salish First Nations. Halfmoon Bay’s settlers chose the area for its mild climate and abundance of fresh water and natural food (fish, shellfish, berries and roots). The Shishalh tribe became known as the Sechelts, a derivation of she’shalt, meaning “the people”. Roberts Creek formed the boundary between the Sechelt people to the north and the Squamish people to the south.

Ted is University Professor Emeritus of English and Comparative Literature at University of Toronto and an Officer of Canada.

In his remarkable and entertaining memoir of his beloved grandfather, Ted conjures up vividly the never-before-told story of a particular time and place not long after Canada was founded.

This is the story of when “Sorreltop Jack” was friends with Crop Eared Wolf; of two decades, 1885 to 1905, when the people in the foothills of modern-day Alberta—First Nation and Métis, rancher and settler—respectfully set out to accommodate Blackfoot sovereignty and new settlement, before Canada broke its Treaty promises to the first peoples.

It was a colourful, unpredictable time. Fort Macleod was a small ramshackle town nestled in the heart of Blackfoot territory when young Jack Cowdry arrived and met Crop Eared Wolf—the legendary Káínai (Blood) warrior, brilliant horseman and sophisticated strategist, who would soon succeed his father, the great statesman Red Crow, as head chief of the Bloods. Friendship and trust became a bond. Here Jack opened his first bank and fell in love with the author’s grandmother, Gussie Thompson, who travelled across the country to work as a teacher, her heart open to whatever adventures life could offer her. The new town embraced it all—Sun Dances and social dances, bibles and medicine bundles, horse races and polo matches, and a wild variety of great characters.

Ted was a wonderful storyteller on stage and I look forward to reading this memoir that promises to illuminate the challenges we face now, and the opportunity we still have to uphold the promise made when Canada was founded. 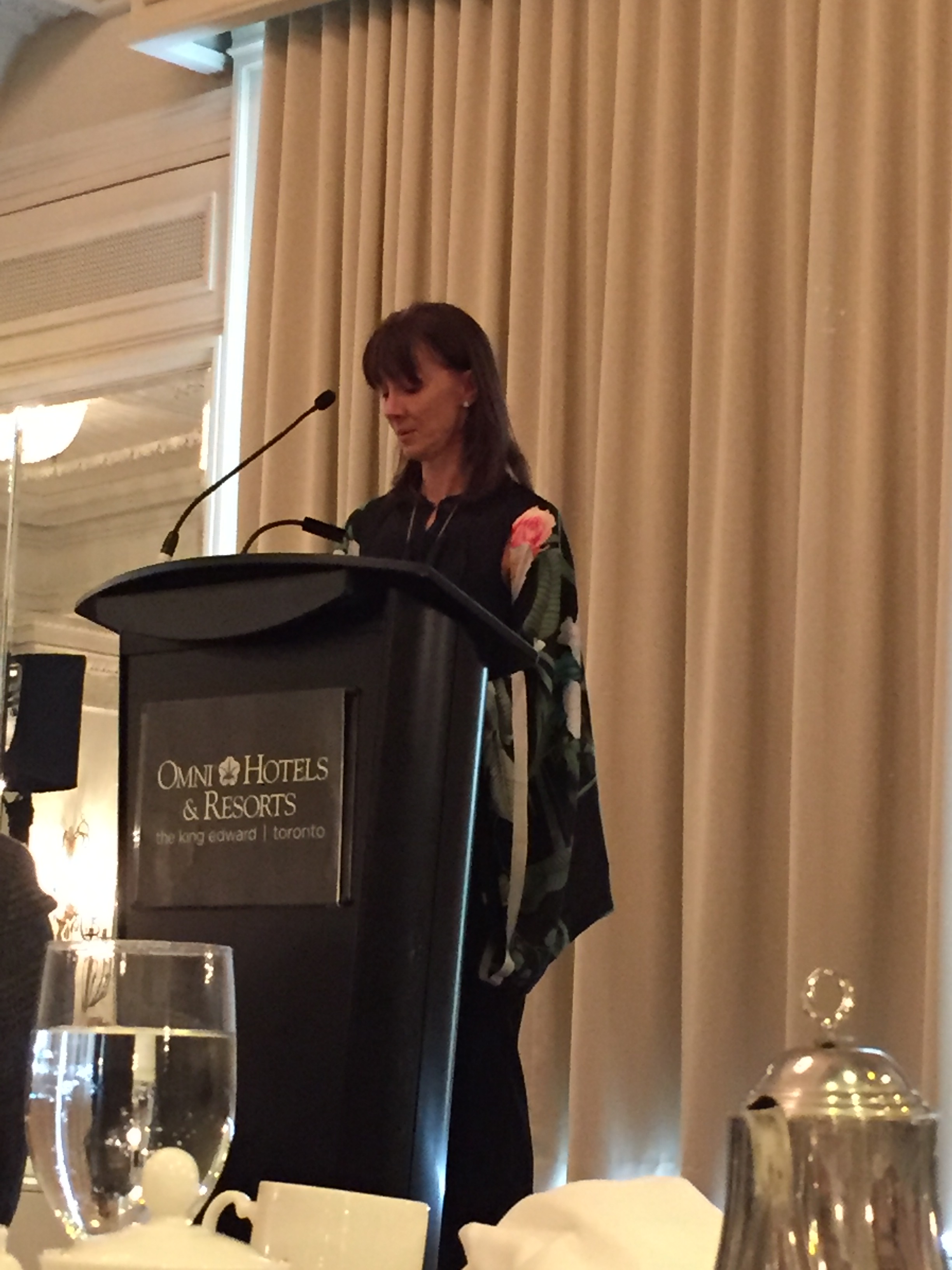 Ben’s introduction to our second author started off with saying that as a bookseller he was always looking for a “small book”. This is to say, a small book is something that a bookseller can get behind and support.

Unearthed by Alexandra Risen is about love, acceptance, and other lessons from an abandoned garden.

Alexandra’s father dies just as she and her husband purchase a nondescript house set atop a natural gorge in the middle of the city. The garden is choked with weeds and crumbling structures. Over the years, as she undertakes the replanting, it stirs memories of her childhood when a nearby forest was her only escape from an empty home life.

As Risen beats back the bushes to unveil the garden’s mysteries, her mother has a stroke and develops dementia. On one of her last visits home, she discovers an envelope of yellowed documents that helps her piece together some of her parents’ unknown story.

Alex spoke from the heart and it was challenging to keep the tears back as I was moved by her story.

Here’s what others have said about her book:

“Unearthed is a powerful read. Alexandra Risen’s stirring narrative offers a deeply personal testament to the healing powers of nature. As the secrets of her family’s troubled past are revealed, the shape shifting garden becomes a metaphor for life, a source of recovery, growth, and insight.” - Scott D. Sampson, author of How to Raise a Wild Child.

“As Alexandra Risen breathes life into an abandoned garden, she gives us a probing reflectoin on inner landscapes, lost roots and the restorative power of nature.” - Plum Johnson, author of They Left Us Everything.

Since the brunch occurred, I have read Alexandra’s beautiful and moving memoir. I will write about it in my Library section but first I’m savouring it. 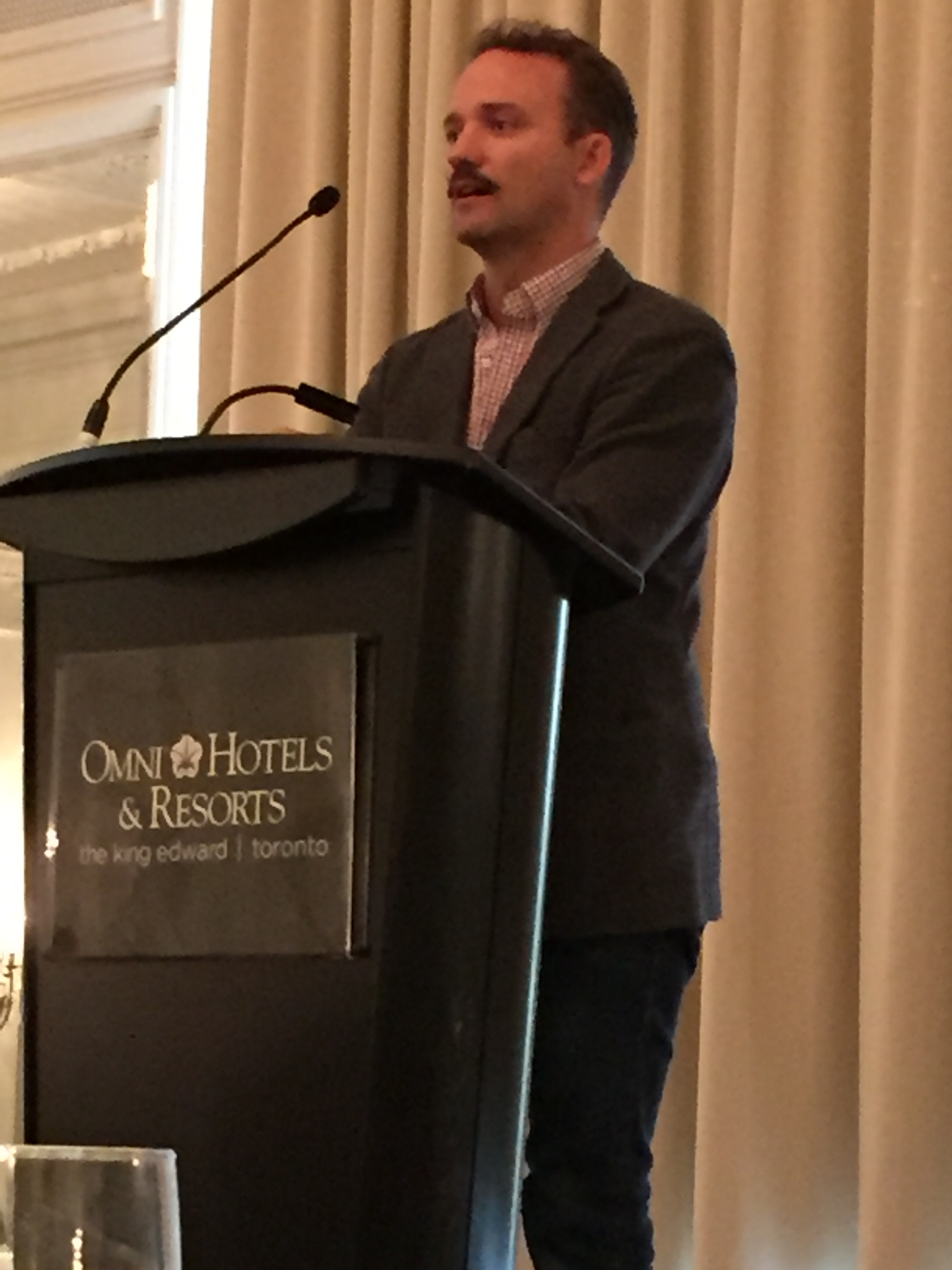 So. I was sitting at the authors’ table as I said. I was introduced to Alexandre. I said hello. That was it. Then Ben got up and introduced Alexandre Trudeau.

Trudeau. duh. I had a list of who was coming. Did I not put two and two together? No. AND I had even read the Toronto Star article about his new book Barbarian Lost.

He shared with us that to this day, China remains an enigma. Ancient, complex and fast moving, it defies easy understanding.

Ever since he was a boy, Alexandre Trudeau has been fascinated by this great county. Recounting his experiences in the China of recent years, Trudeau visits artists and migrant workers, townspeople and rural farmers. Often accompanied by a young Chinese journalist, Vivien, he explores realities caught in time between the China of our memories and the thrust of progress. The China he seeks out lurks in hints and shadows. It flickers dimly amidst all the glare and noise. The people he encounters along the way give up but small secrets yet each revelation comes as a surprise that jolts us from our preconceived ideas and forces us to challenge our most secure notions.

Barbarian Lost, Trudeau’s first book, is an insightful and witty account of the dynamic changes going on right now in China, as well as a look back into the deeper history of this highly codified society. On the ground with the women and men who make China tick, Trudeau shines new light on the country as only a traveller with his storytelling abilities could.

He is a gifted storyteller and a talented orator sans notes. I was thinking about his travels and how he said they are “a voyage for the human soul”.

Advance Praise from Robert Wright, author of Our Man in Tehran: “ Like all great travelogues, Barbarian Lost is not merely about a place but about one man’s restless, longing encounter with that place. Alexandre Trudeau has a keen eye for contradiction, a novelist’s gift for dialogue and a fly-on-the-wall detachment that is both austere and engrossing. At turns provocative, hilarious and moving, this book is a must-read for all Canadians.” 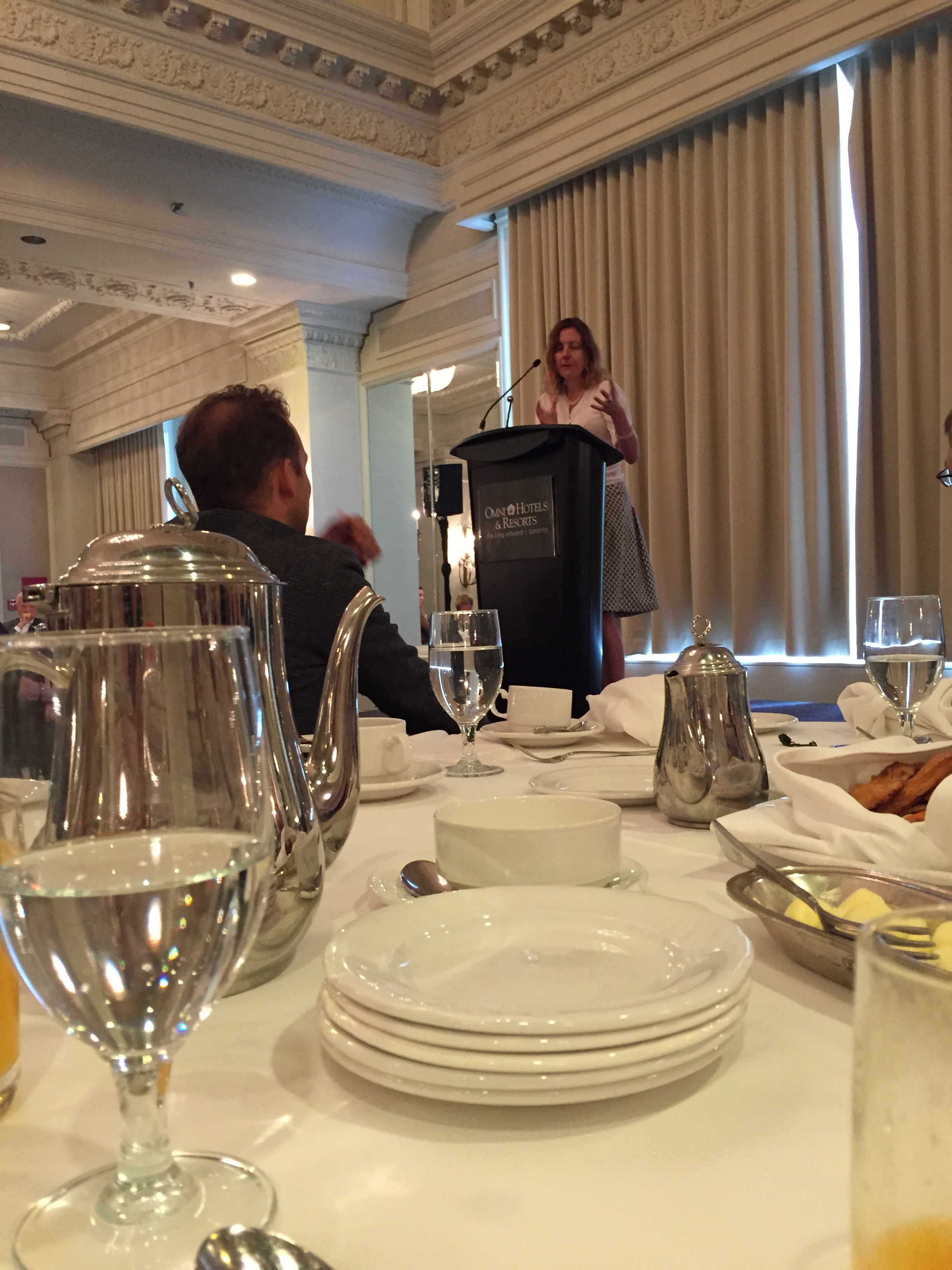 Finally it’s my author’s turn as I’m there representing New York Review Books and I can’t wait to hear Ruth Scurr talk about her book John Aubrey, My Own Life.

who is John Aubrey?

Born on the brink of the modern world, John Aubrey was witness to the great intellectual and political upheavals of the seventeenth century. He knew everyone of note in England—writers, philosophers, mathematicians, doctors, astrologers, lawyers, statesmen—and wrote about them all, leaving behind a great gift to posterity: a compilation of biographical information titled Brief Lives, which in a strikingly modest and radical way invented the art of biography.

Aubrey was born in Wiltshire, England, in 1626. The reign of Queen Elizabeth and, earlier, the dissolution of the monasteries were not too far distant in memory during his boyhood. He lived through England’s Civil War, the execution of Charles I, the brief rule of Oliver Cromwell and his son, and the restoration of Charles II. Experiencing these constitutional crises and regime changes, Aubrey was impassioned by the preservation of traces of Ancient Britain, of English monuments, manor houses, monasteries, abbeys, and churches. He was a natural philosopher, an antiquary, a book collector, and a chronicler of the world around him and of the lives of his friends, both men and women. His method of writing was characteristic of his manner: modest, self-deprecating, witty, and concerned above all with the collection of facts that would otherwise be lost to time. 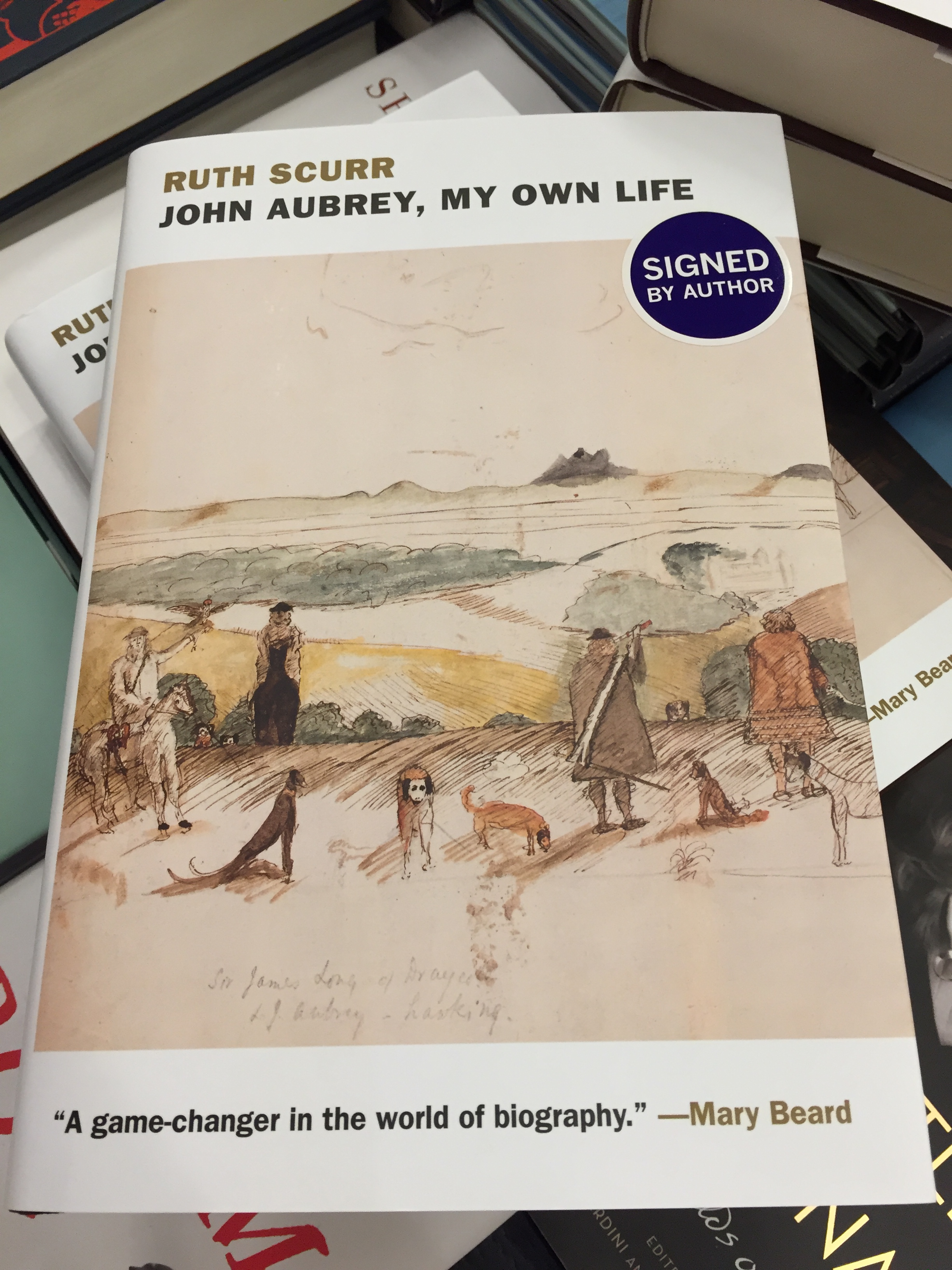 John Aubrey, My Own Life is an extraordinary book about the first modern biographer, which reimagines what biography can be. This intimate diary of Aubrey’s days is composed of his own words, collected, collated, and enlarged upon by Ruth Scurr in an act of meticulous scholarship and daring imagination. Scurr’s biography honors and echoes Aubrey’s own innovations in the art of biography. Rather than subject his life to a conventional narrative, Scurr has collected the evidence—the remnants of a life from manuscripts, letters, and books—and arranged it chronologically, modernizing words and spellings, and adding explanations when necessary, with sources provided in the extensive endnotes. Here are Aubrey’s intricate drawings of Stonehenge and the ancient Avebury stones; Aubrey on Charles I’s execution (“On this day, the King was executed. It was bitter cold, so he wore two heavy shirts, lest he should shiver and seem afraid”); and Aubrey on antiquity (“Matters of antiquity are like the light after sunset—clear at first—but by and by crepusculum—the twilight—comes—then total darkness”). From the darkness, Scurr has wrested a vibrant, intimate account of the life of an ingenious man.

She told us she tried to write a biography about Aubrey but he was a man who said “a pox” on biographies that “record specific details”. So she tried an experiment not knowing whether it would work. She said it was like “restoring a painting” and that was how she used his diaries leaving gaps when she had nothing to fill in with and removed herself from the desire to providing a voice over.

It’s a big book but she advised we could read a little bit at a time like you would a diary. I can’t wait to dig into my copy especially after spending time with Ruth in Toronto.

what did we do?

We took to Yonge Street, the world’s longest street at 1,896 km long according to the sidewalk next to the Eaton Centre. It was Open Streets Toronto and so we actually walked in the middle of the street until it was too hot!

As Ruth’s unofficial tour guide I had to take her to see Indigo Books. On the way through the Eaton Centre we stopped at Roots for a little souvenir shopping for her daughters. Their classic sweatshirt with the Roots logo featuring the Cooper font and the quintessential Canadian beaver was designed by two of Canada’s graphic designers of the 1970s, Heather Cooper and Robert Burns. 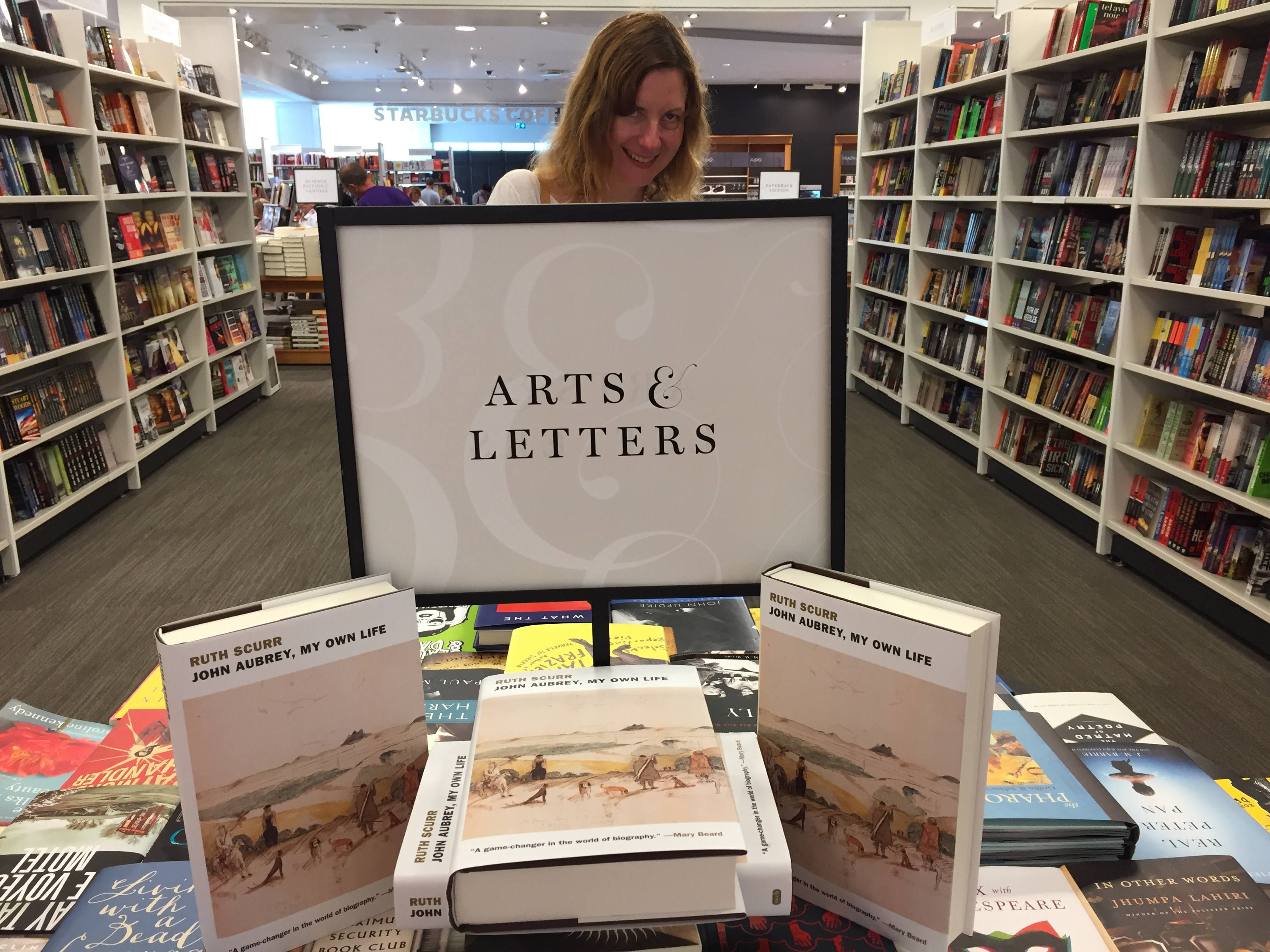 We arrived at Indigo Books and walked around the main floor which has books coupled with blankets, mugs, purses and more! Upstairs we couldn’t find the eight copies that were supposed to be in section. Super staff Christian & Justin proved to be very helpful. They found four copies and brought a sharpie along with stickers. We were both happy campers to leave the store with signed books on the table in the section. 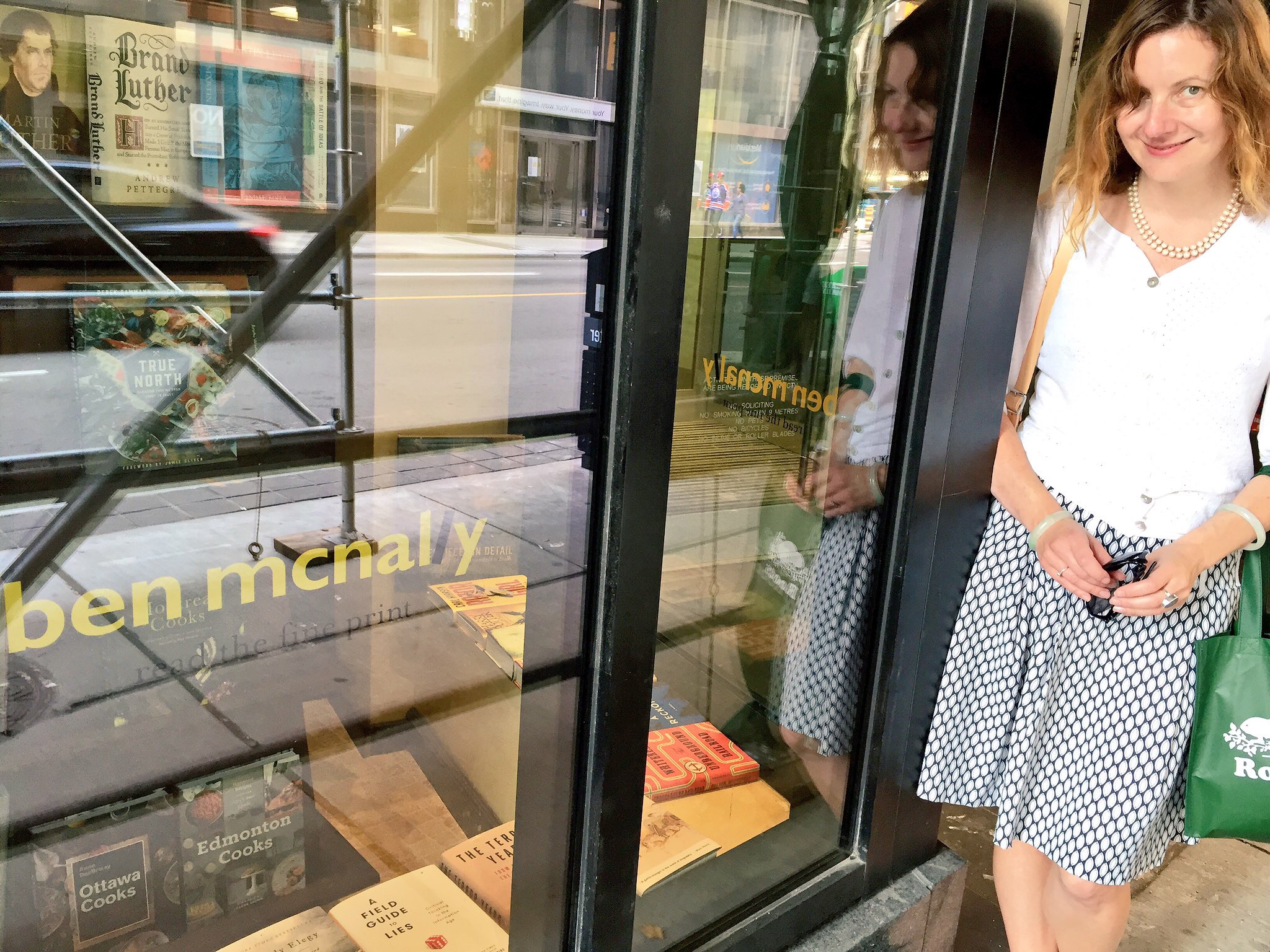 One more stop and that was to visit “Toronto’s Most Beautiful Bookstore” : Ben McNally on Bay Street. He’s closed on Sundays so we could only admire Ruth’s book in the window and peek in admiring the beautiful interior. 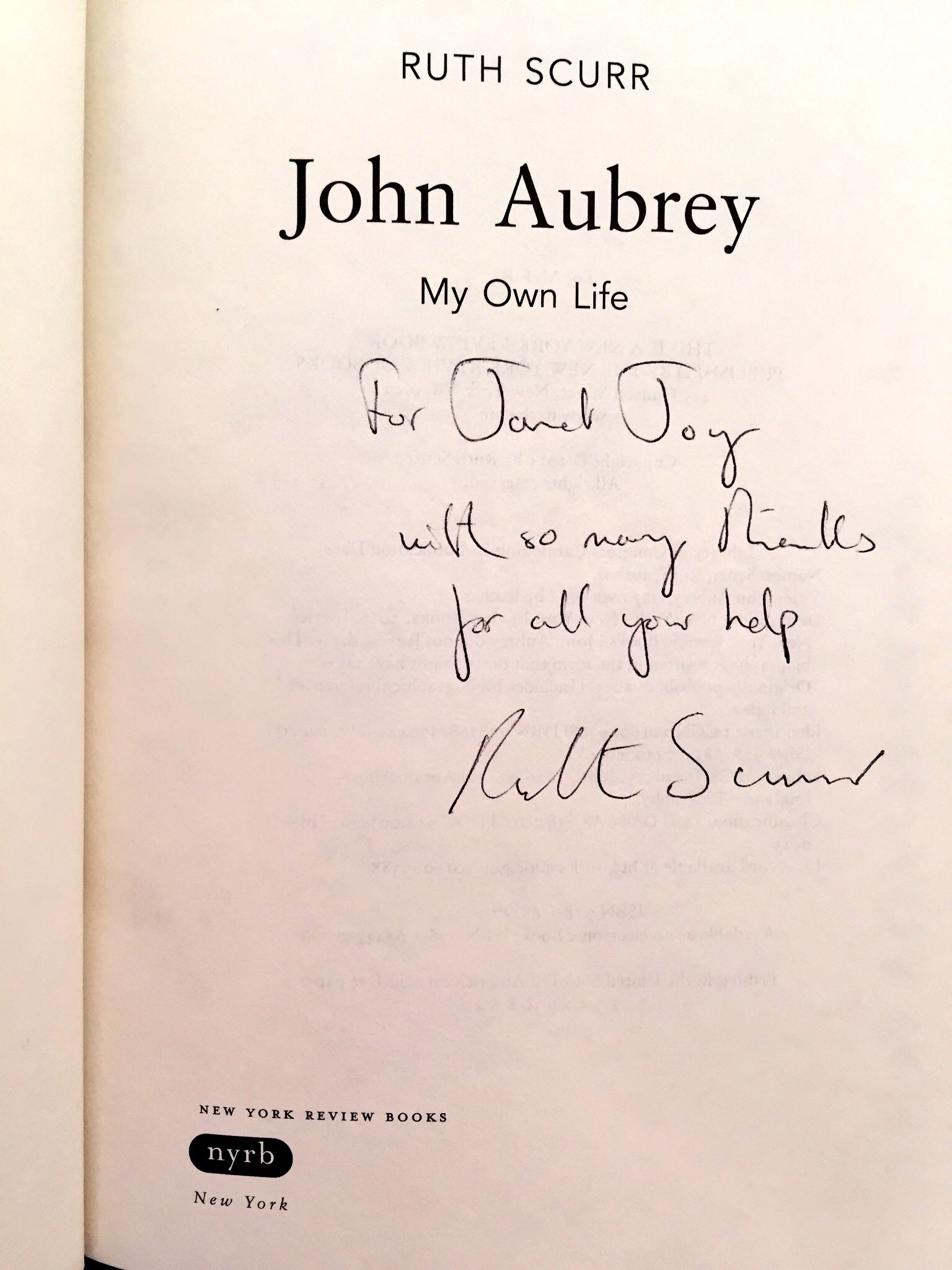 I was left not only with great memories of my time at Ben’s books & brunch but my hours with Ruth Scurr.