If you live in Toronto, do you remember that spring-like weekend in February? The kind that gives you spring fever and ignites a cleaning frenzy.

I ride Betsy the Blizzard (my winter bicycle) when there’s snow and ice on the roads. In the spring she gets an extra cleaning to keep her free from rust during the other months of the year.

Last year I hired Matteo to come with his Mobile Bike Repair to tune-up my three-season bicycle, Black Beauty, as the hydraulic brakes were seized up. It was not safe to ride to my wonderful local bicycle shop, Hoopdriver Bicycles. I live in a valley, which means pushing a heavy bicycle up a hill for a number of blocks to see Martin at Hoopdriver is not a great trip. The luxury of having Matteo arrive at my home and fix it would be worth extra money but get this, the fee is less than most in-retail locations. Why? Because Matteo doesn’t have a shop with four walls that he has to pay taxes on etc. He charges by the hour and parts.

So this year, I had an idea to expand what I had found so convenient.

I am car free which means I have a driveway that is empty. Why not fill it with my neighbours’ bicycles! 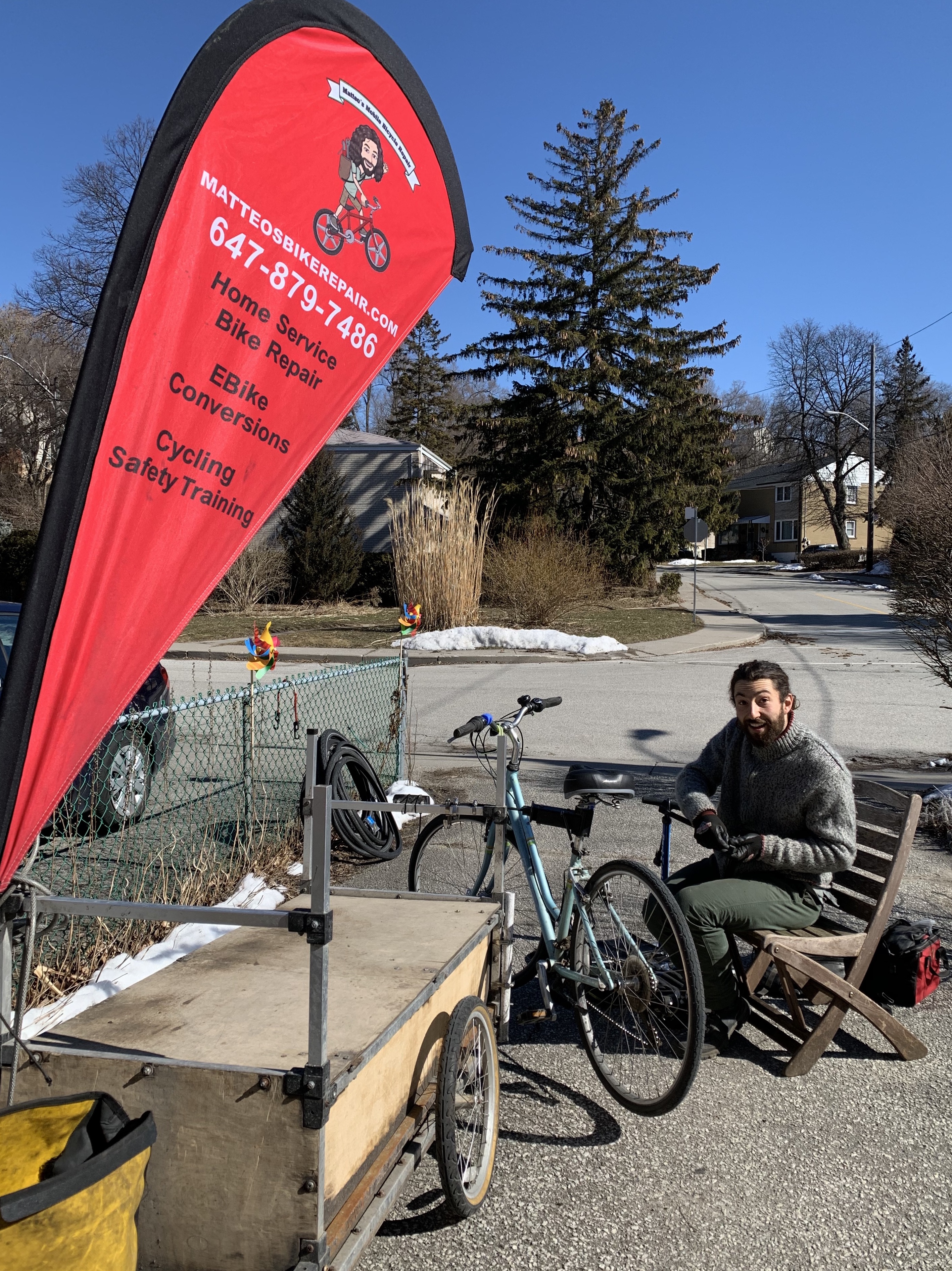 We have an active neighbourhood facebook page so I posted a photo of Matteo with his bicycle, trailer and banner working on a bicycle with an invitation to come on March 7th with their bicycles.

My goal was to promote Matteo, provide a convenient and cost effective service to my neighbours, meet new residents in the area AND I wanted to make sure their bicycles were safe, tuned up and ready to roll! We live near a peaceful multi-use trail along the Humber River. The more who ride a bicycle in the city the more who will want safe streets throughout the city!

Saturday morning arrived with blue skies and the sun shining! There were six families who ‘booked’ to come. I had a Sign-Up Sheet which meant they could drop off bikes and return later. I’m a visual learner so with my neighbours’ names written down it would help me to remember. 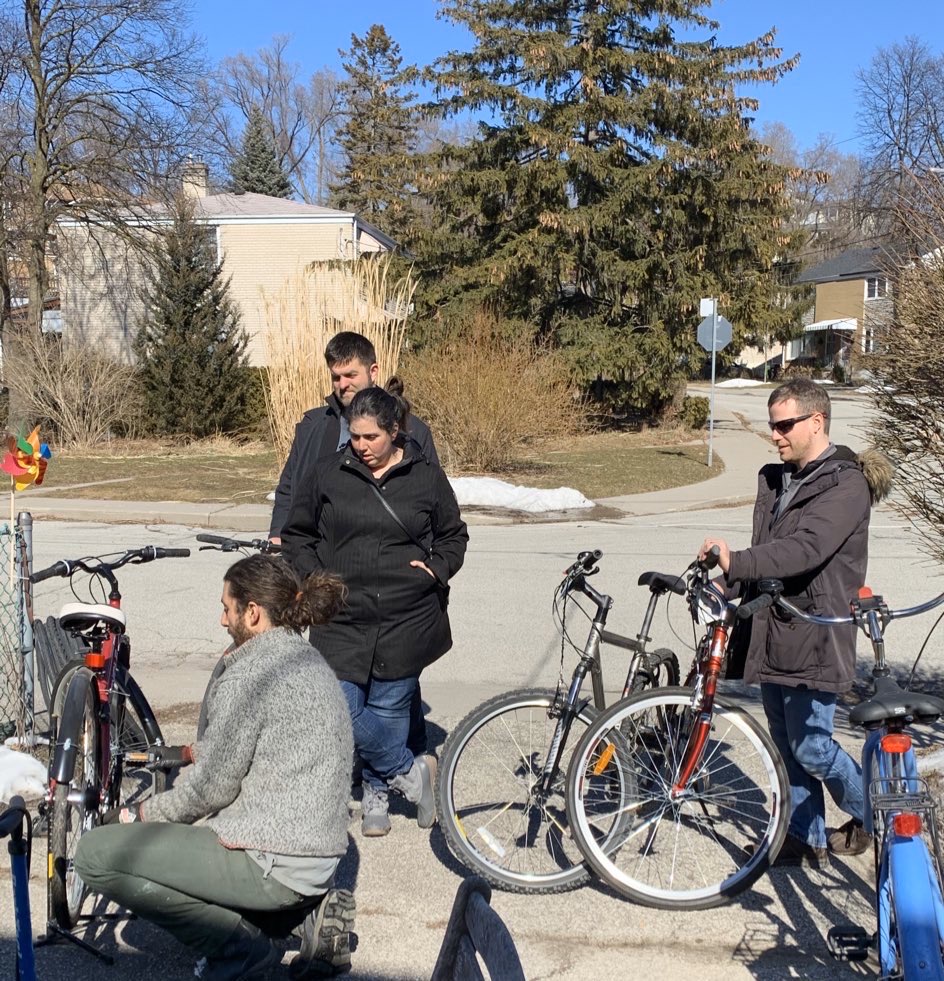 Matteo worked steadily throughout the day providing “How to safety check a bike” tutorials and general safety gear information. I made sure he was hydrated, provided him with access to my washroom and got to know him better. Did I meet my goals?

Matteo worked on over 10 bicycles (some were very tiny like Rowan’s wee trike) that day – he had to return later to tune-up mine as there wasn’t time! Those unable to come have his name & number so hopefully more business for him in the future. 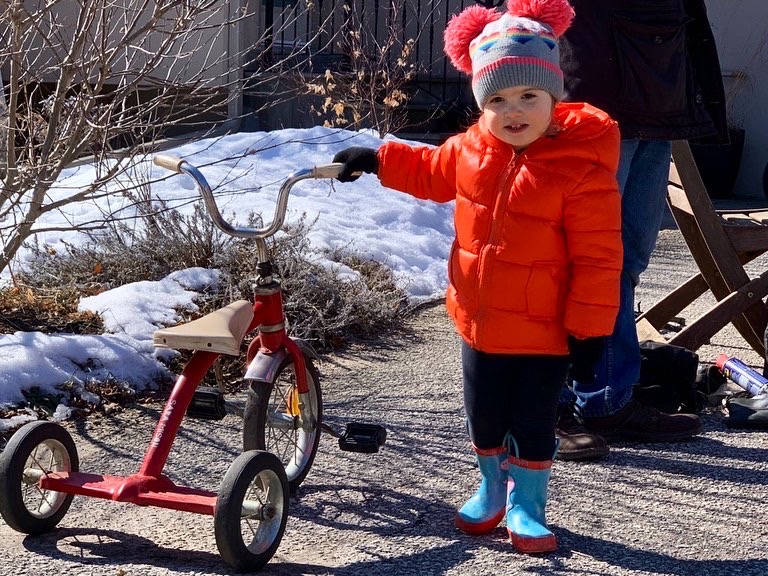 I met new families! They are on streets a few blocks away but now we are united because of two wheels.

AND my neighbours’ bicycles are safe to ride!

At the end of the day, an older woman with her dog came by. Her name was Susan and she told us she had four bicycles that her now adult children do not ride. Matteo was welcome to them if he could use them. We told her we’d come at day’s end to take a look.

Matteo packed up his gear. I sat on his trailer – kinda like a parade float! He cycled down the street to her house (he has pedal assist motor) with me. There she had stacked beside her house, one woman’s bicycle, an old Raleigh, and two smaller framed mountain bikes that were pretty rusty. But all solid bicycles! We decided to move them to my place where I could store them under a tarp as I had a plan. 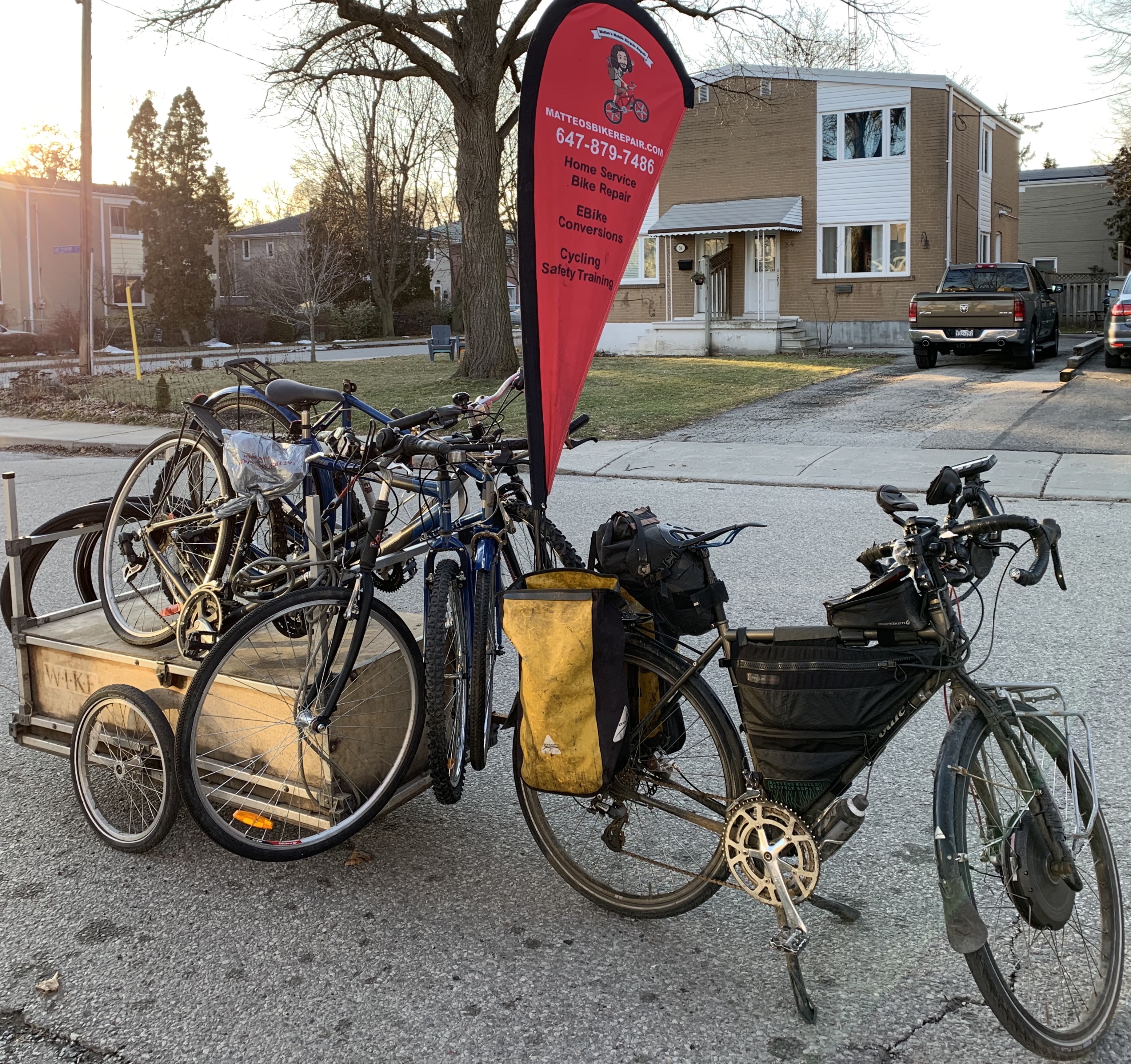 When Matteo returned later that week for my bicycle tune-up I asked him to fix up the women’s bicycle as I knew where it should go.

Najia Zewari is an Afghan/Canadian women’s rights activist, Founder of the Global Women’s Network, leads the Women’s Wellness Café and the Women’s Cycling Network (WCN). WCN is a community-led initiative in Thorncliffe and Flemingdon.

“We want to learn bike.” Said the middle-aged women from Afghanistan where mobility was prohibited.

At a recent Bike Minds TO event held at the awesome Curbside Cycle, she told us the story of women learning how to bike in their new country first with CultureLink then as a group determined to continue.

WCN mentors share the lessons of balance to ride a bicycle and how to discover the city. Najia said they are riding “wheels of empowerment”.

When asked what she needed to serve the 50 women on the waiting list … 50!!… Najia said mentors and bicycles. I contacted Najia and said I have a bicycle for her!

I arranged with my generous neighbour Thom to help me transport the tuned-up and cleaned up bicycle to Flemingdon Park the following weekend.

It was a perfect fit!!

Thom and I met Najia and Shellah at a parking lot to give her the bicycle. Shellah had learned the lessons of balance to ride a bicycle in two days said Najia and now can discover the city ON HER OWN BICYCLE!

Charlie’s FreeWheels uses bicycles to support the development of empowered young leaders, and build a community of self-assured young cyclists. They do this by improving youth access to bicycles, facilitating bicycle-related skill development, and inspiring youth to ride with confidence.

Since 2008, their goal is to contribute to a life of physical activity, sustainable transportation and accessibility. In keeping with the ideals of a fallen cyclist, Charles Prinsep, they aim to inspire a spirit of exploration, and to mobilize, empower and engage youth, using bicycles a driver for personal growth and positive social change. 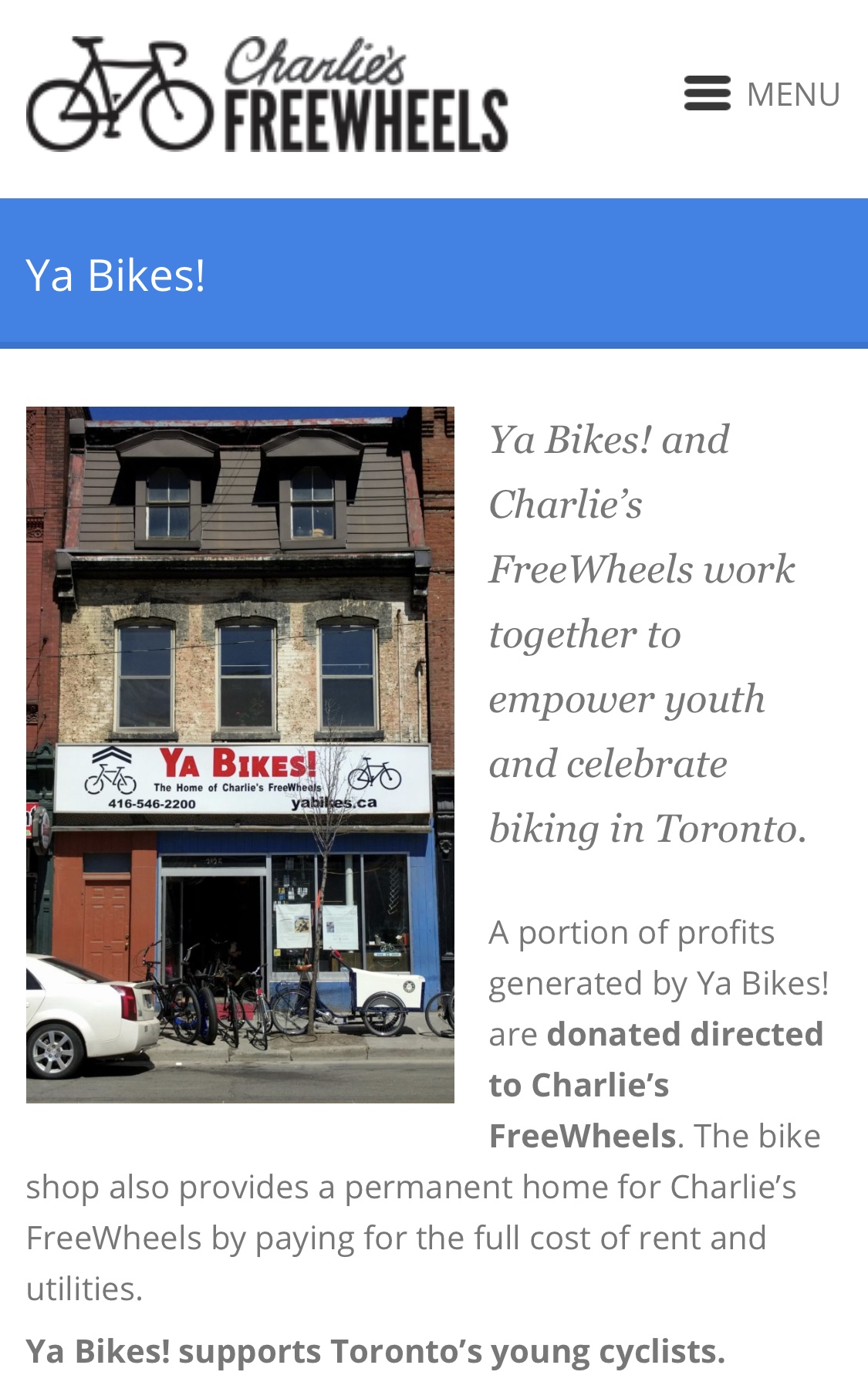 The Spring Build-a-Bike Registration was open when Thom and I delivered the second ‘Susan’ bicycle.

Each participant in the program is paired up with a used bicycle that they will build for themselves with staff and volunteer assistance, finishing the program with a fully functional, road-ready bike!

The Build-a-Bike program is open to youth between the ages of 12-25 in Toronto.

All programs include - 30 hours of bike mechanics and safe cycling education; A bicycle and all of the tools and materials required to fix it; Bike lights, a helmet and a lock; Vegetarian or vegan dinner options for every class!

Alix, the Executive Director, was thrilled with the bicycle we donated to the program.

What to do with the other two ‘Susan’ bicycles? One was missing a saddle. They were smaller in size and would be great for kids. Charlie’s FreeWheels program was suspended at this time as we were all physical distancing so I couldn’t ask Thom to drive me and two bicycles anywhere.

I decided to put them on Facebook Marketplace. Immediately I had a response from Winsome. He would come and pick them up at my house. Perfect!

I didn’t know what to expect as I am also hesitant about posting an ad but I was delighted by the warm soul who arrived. He had driven from Woodbridge to pick up these bicycles for a program in a small town in Jamaica where he’s originally from. The two bicycles mean he’s half way to his goal of 10 bikes that he’ll then ship together. 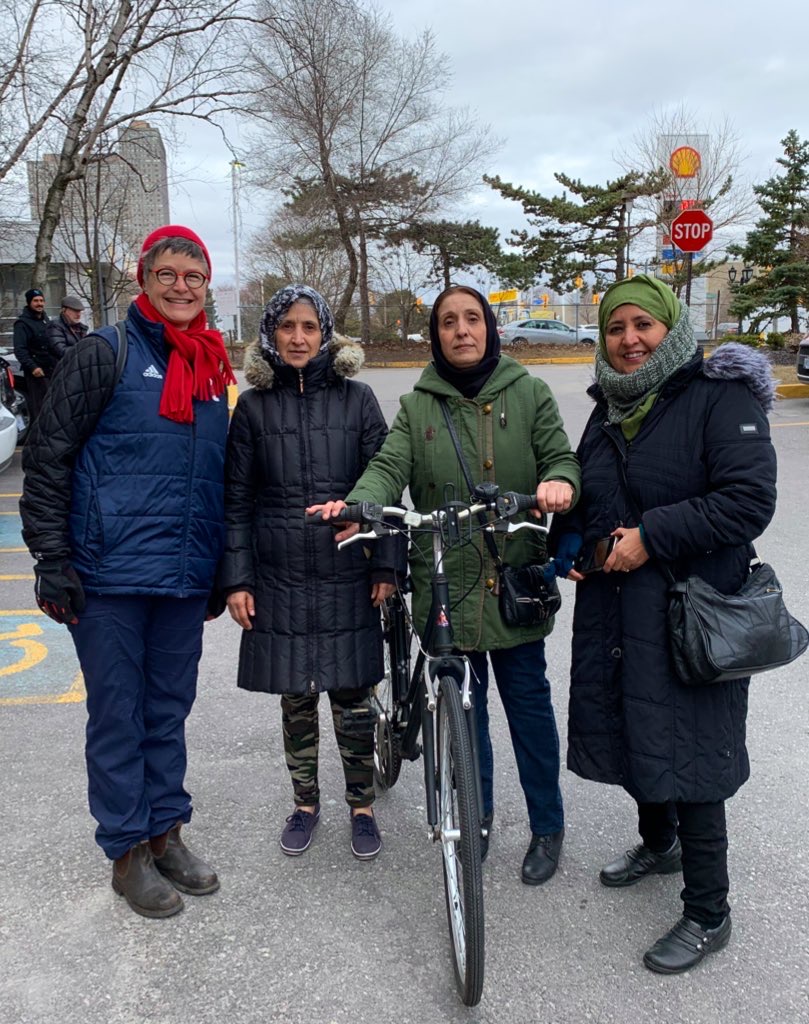 Bespoken Johnnyrandom says “I remember my first time riding a bicycle. It felt like freedom. I associate the sounds of a bike with this feeling”