stories behind the drapes

Have you ever seen Alfred Hitchcock’s REAR WINDOW?

My first time was when I was renting the upper two floors in an old Victorian semi in Roncesvalles. It was in the late 80s when there was an embarrassment of polish delis and bakeries! Oh, and the best cobbler!

Searching for a link to Rear Window, I found Roger Ebert’s review of the film.

Here’s a quick story, I met and rubbed elbows with Roger Ebert once! Okay, maybe it was my elbow that brushed his as we were picking up programs at the TIFF Press Lounge and yeah he gave me a dirty look!

I was in the TIFF Press Lounge with a Press Pass because I was Publisher of ACTRA The Branch Line newsletter… those were the early days of TIFF on Bloor Street West and it was a hellavu lot of fun!

In case you don’t know or forget, TIFF was founded in 1976, and is now one of the largest and most prestigious events of its kind in the world. In 1998, Variety magazine acknowledged that TIFF “is second only to Cannes in terms of high-profile pics, stars, and market activity”. In 2007, Time noted that TIFF had “grown from its place as the most influential fall film festival to the most influential film festival, period”. This is partially the result of the festival’s ability and reputation for generating “Oscar buzz”. Will TIFF buzz in 2020 ? If it is cancelled, it will be a huge loss in too ways to count.

Ebert wrote “The hero of Alfred Hitchcock’s “Rear Window” is trapped in a wheelchair, and we’re trapped, too–trapped inside his point of view, inside his lack of freedom and his limited options. When he passes his long days and nights by shamelessly maintaining a secret watch on his neighbors, we share his obsession. It’s wrong, we know, to spy on others, but after all, aren’t we always voyeurs when we go to the movies? Here’s a film about a man who does on the screen what we do in the audience–look through a lens at the private lives of strangers.” 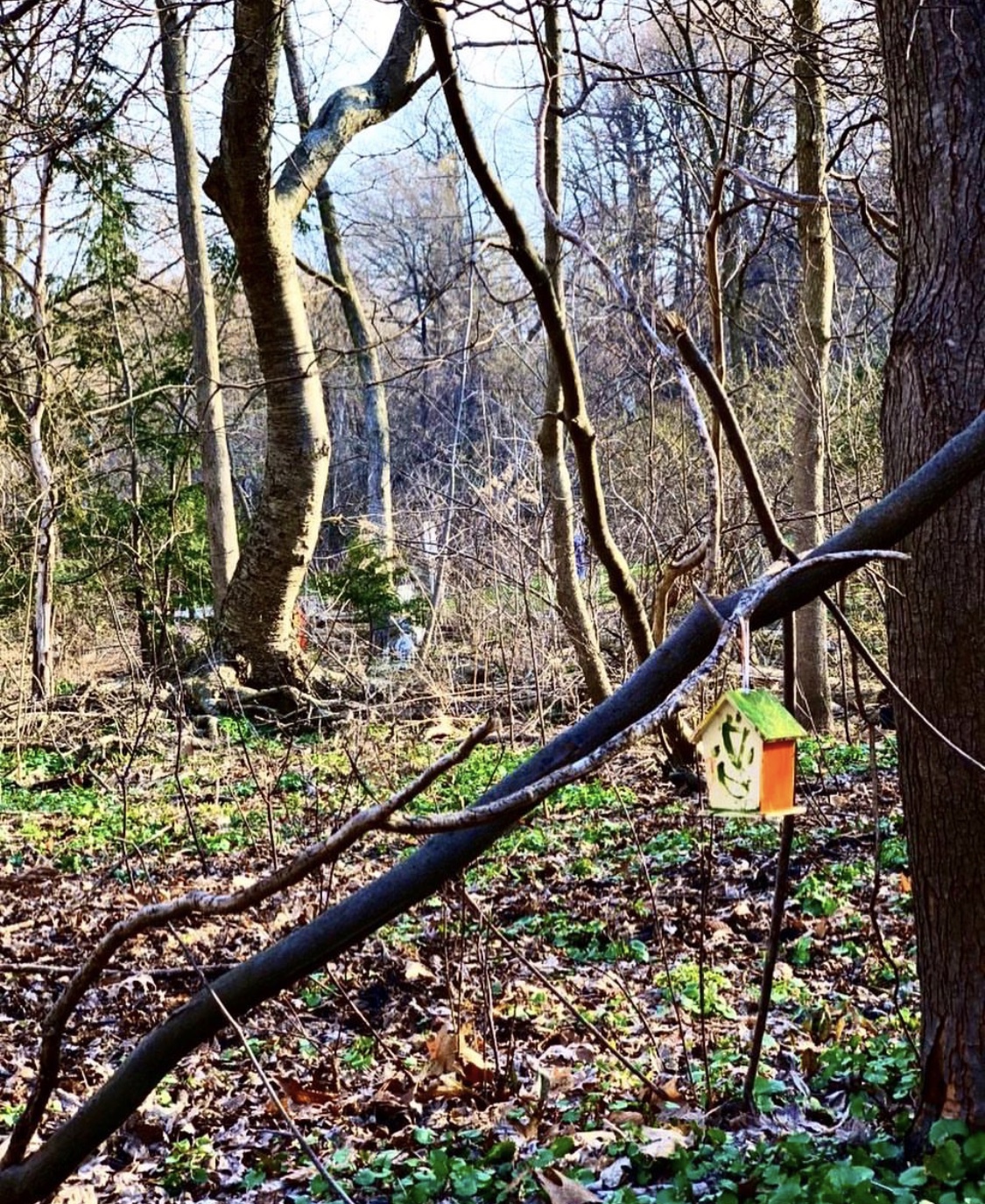 I can’t help but reflect on the feeling of being trapped as I watch my neighbours from my dining room table. I have a large picture window with a front window street view. Do they wonder what I am doing behind my wooden blinds?

I have been watching out for a neighbour who turned 90 years old recently. She’s lively and has the best stories. I learned a new one the other week. She told me about the social life on our little street back in the late 50’s when the homes were first constructed.

This was after Hurricane Hazel wrecked devastation in Toronto. Bridges and streets were washed out, homes and trailers were washed into Lake Ontario. Thousands were left homeless, and 81 people were killed—more than 30 on one street alone. The total cost of the destruction in Canada was estimated at $100 million (about $1 billion today). This storm would change the Toronto landscape forever and mobilize the need for managing watersheds on a regional basis. I think of this history every time I walk or cycle along the Humber River. 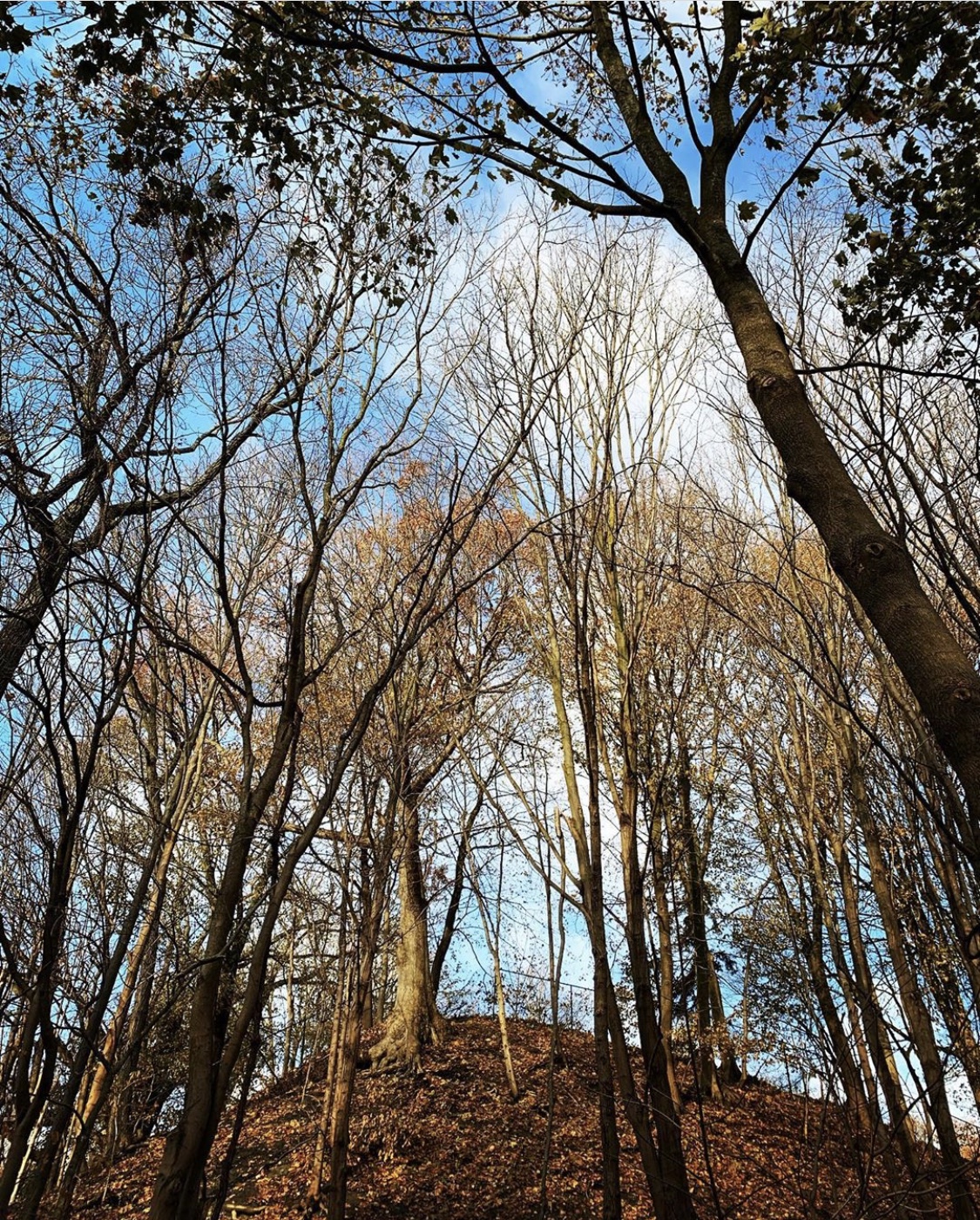 The social life on Skylark Road included scotch, Lillian said. The adults had suppers at each other’s homes all the time. The kids played and grew up together. More stories will be shared when we can have supper together again!

Self-isolation has had a surprising benefit. I’ve gotten to know a couple of my neighbours better. Not just from my Front Window but from the required physical distancing of 6 foot plus chats, texts and baking exchanges.

I enjoy cooking especially when there’s a challenge like ‘what’s in the fridge’ and ‘how long can I ration these fresh vegetables’? I bake when I need a dessert for a dinner party or in years past for my son’s school or sport snacks.

The homemade bread urge hit me in the first week. I had old yeast in the cupboard so I wrote a plea for some on our neighbourhood facebook page. Within a minute, I kid you not, Sue from a few streets over said there’s some in the mailbox for me at such & such address. WOW. I pedaled over with a thank you note & some $ (she said don’t but of course I did) which I exchanged for the yeast packets. My bread did not rise much – my fault not Sue’s. It tasted okay but I’m not a bread baker. I make muffins, quick breads, squares, and sometimes pie. I will leave the yeast and 50lb bags of flour to others. You’re welcome.

Ingredients for a happy life includes people with white wine and pecans. Right?

Last year on Canada Day weekend I was making a new vegan recipe for a dinner party. I realized on that holiday Monday that I needed 1/2 cup of white wine. I didn’t have any white wine! LCBO was closed for the holiday. I asked my usual suspects who were either away or didn’t have any (what?!). What’s a girl to do? I put on my summer hat, took out some lemon squares from the freezer (always have a sweet in the freezer ‘just in case someone drops by for tea’) and with my Corning measuring cup in hand, marched off down the street looking for someone to be out and about with a good wine cellar!

Heather was in her front yard weeding. I called out and posed my question. Do you have white wine? I need ½ cup for a recipe. She asked “Chardonnay or Pinot Grigio?” As they say, the rest is history. I was invited to her back deck for a cold beer – it was a hot day! – and a conversation. We’d never met. I’ve lived in this neighbourhood for 25 years. She’s been here for 30!! Raising kids and working and being on the other side of the street past the intersection meant we’d never seen each other.

It’s actually easy to avoid getting to know others … walk outside your door, get in a car, drive off to work or shop or whatever. Working at home now provides the opportunity to explore one’s hood more.

Since that day forward, she has become a trusted friend. During these COVID-19 weeks, I text her every morning so she knows I’m alive. Our opening line is usually ‘what are you having for breakfast?” Sometimes it’s garden talk. She and John have a glorious garden oasis!!

Last Sunday I woke up ready to bake Butter Tarts. There was a #ButterTartBakeoff on Instagram and I thought – sure! I love butter tarts and I had all the ingredients except pecans. (currants & raisins are okay but not a necessity. Walnuts or pecans … I prefer the latter). I mentioned that morning in our daily text to Heather that I was going to make butter tarts but I didn’t have any pecans. She asked how much do you need? ½ cup was my answer and in a minute, she had left a bag in her mailbox for me. 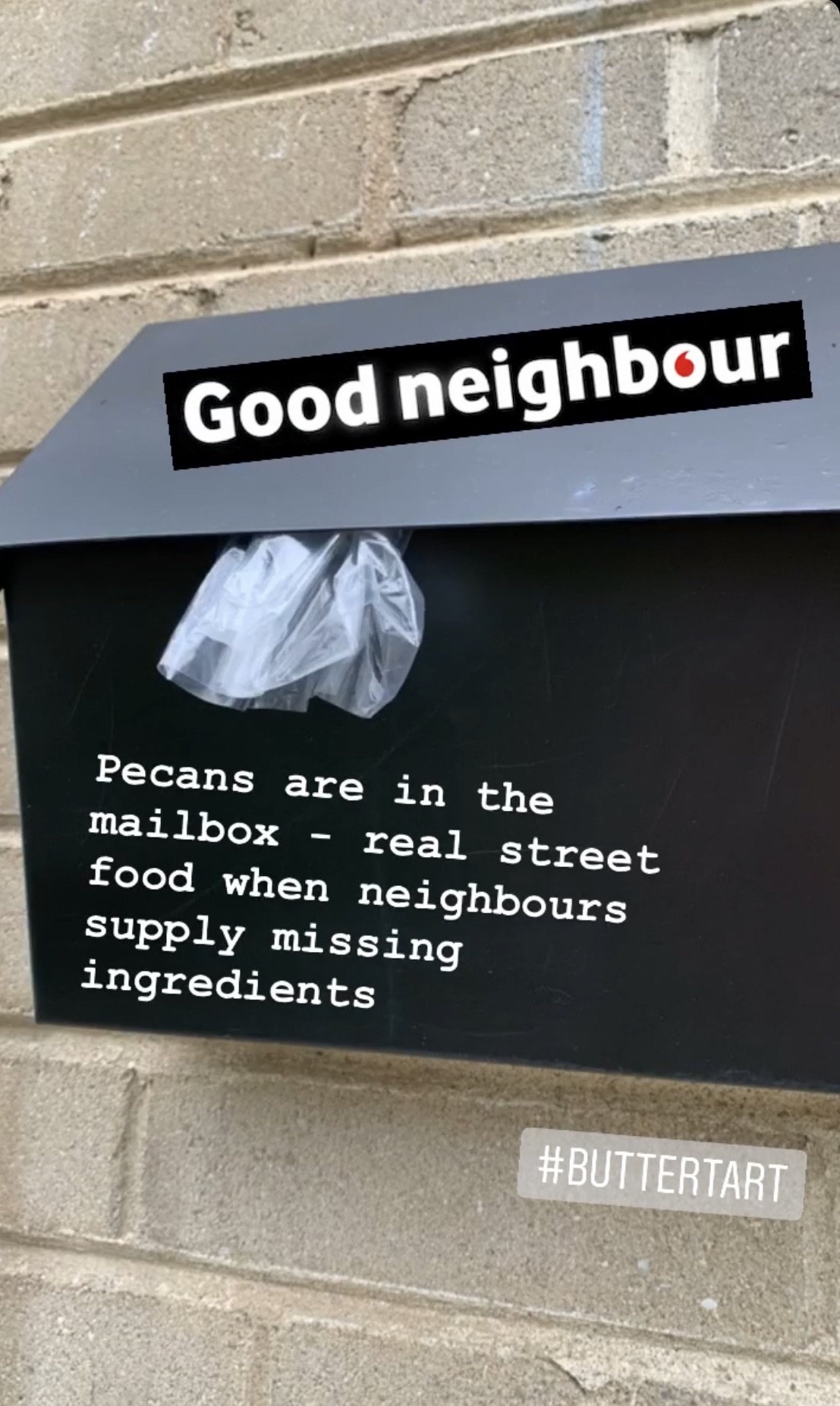 I found a recipe by the queen of baking, Elizabeth Baird! I trust all her recipes. I used her adapted recipe on Tasting Table.

My “Canadian Butter Tarts” were pretty awesome and you know what I did this time which is different from my baking track record … I read and reread the recipe. I took my time. (I have lots!) and I also used tips I learned from the Great Canadian Baking Show on Netflix which I loved!!

It was the most satisfying baking experience I’ve ever had. AND the results!! The butter tarts tasted better after sharing them with Heather. 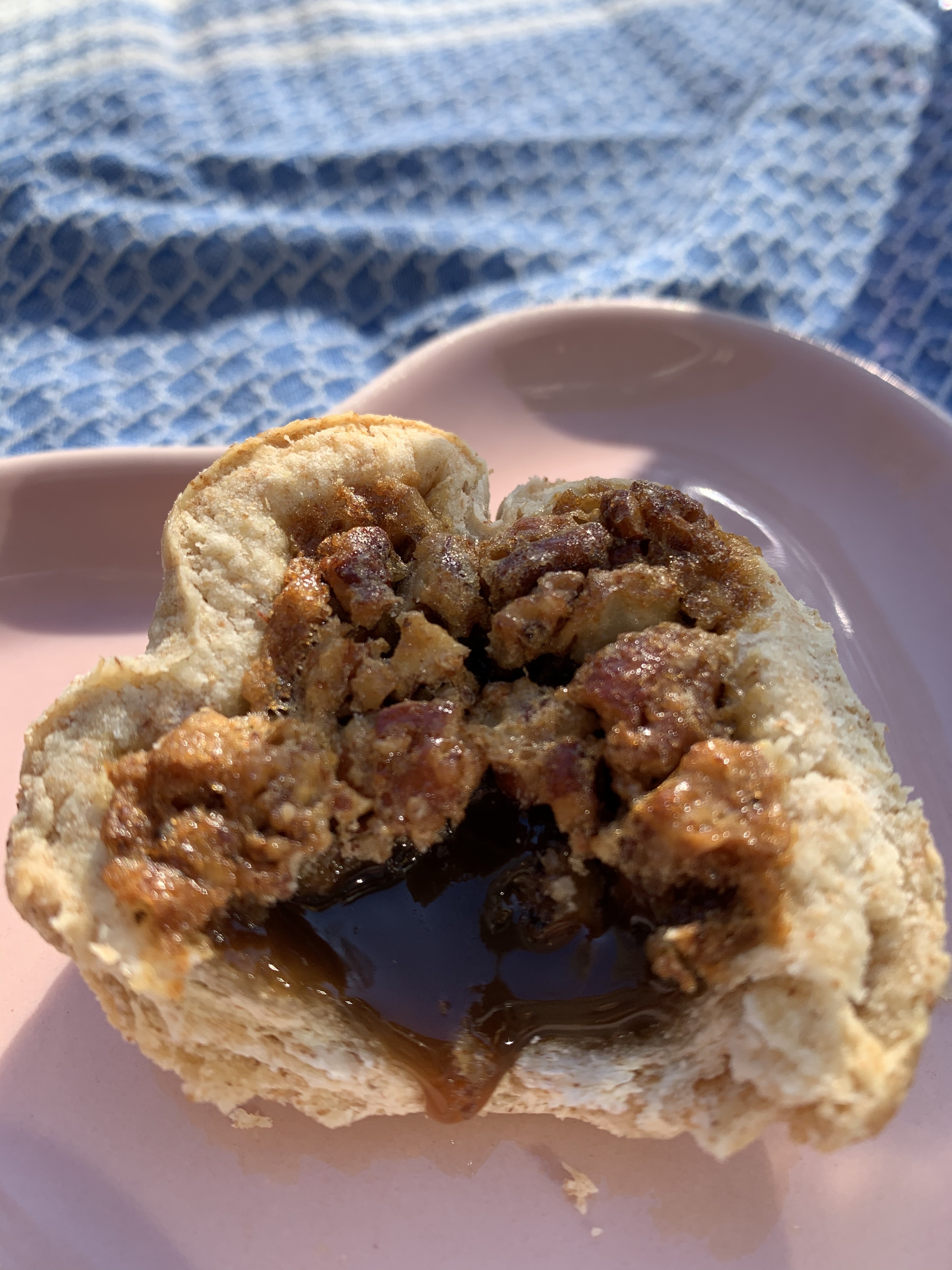 Bill Wither’s Lovely Day released in 1977. It’s a song about clinging to the tiny pleasures that make life bearable.