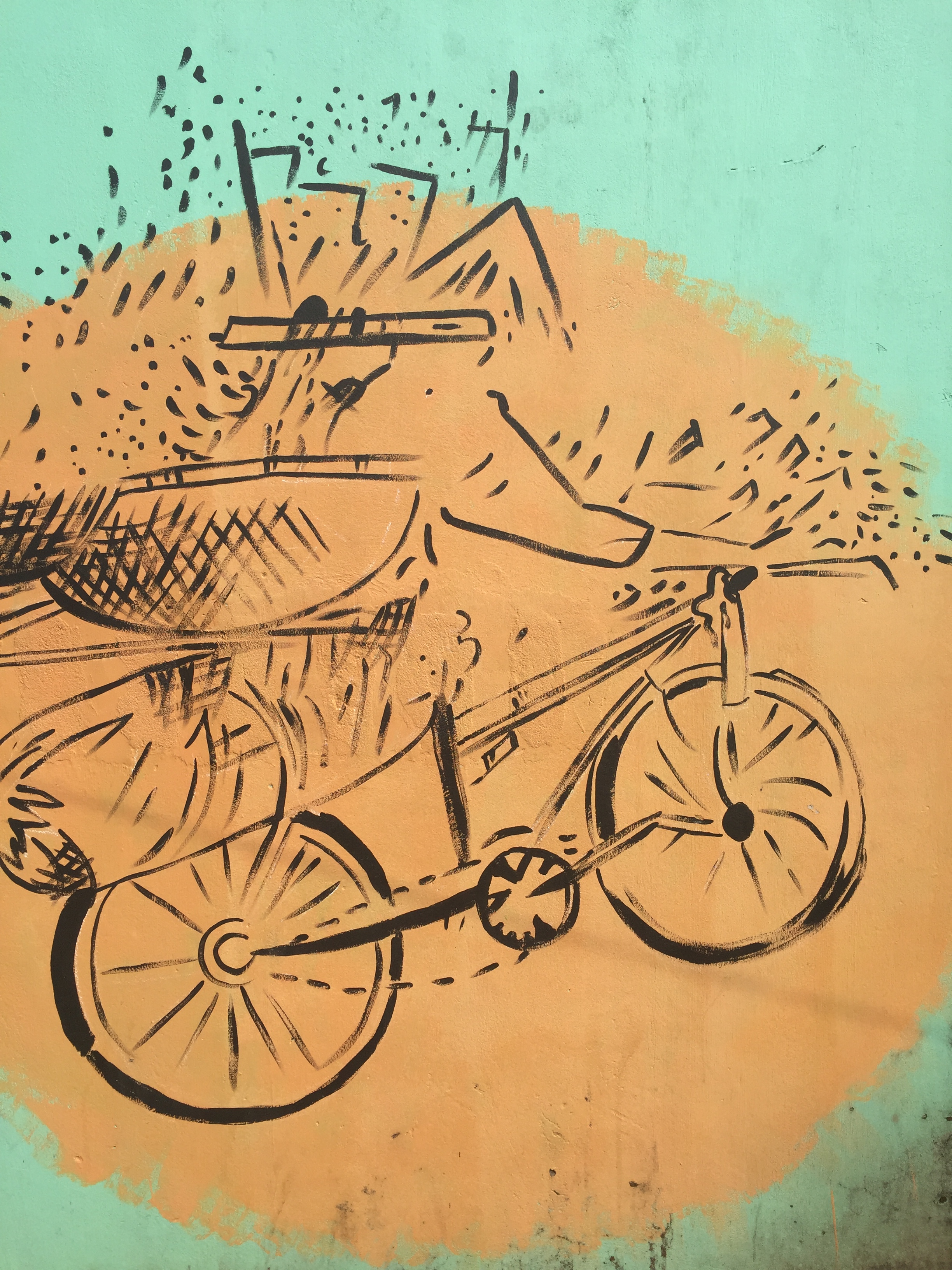 It may refer to:

My son asked “did you get this definition on Wiki?”.

Velo is my bicycle and if you move the letters around it spells love equalling a pitch perfect anagram. 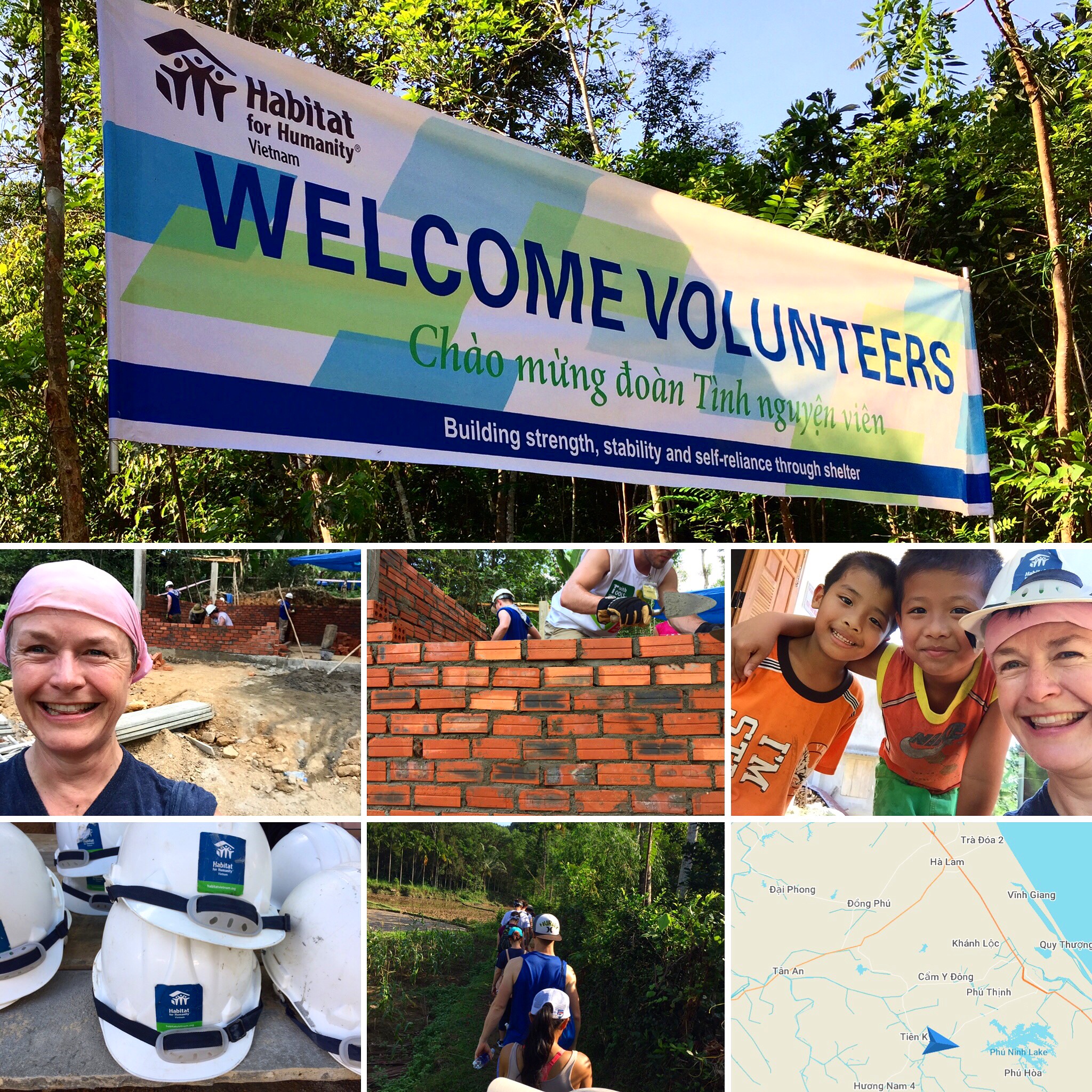 I love riding my bicycle and I love getting into the heart of a country. I have discovered that volunteering for and working alongside like minded individuals enriches me beyond measure. 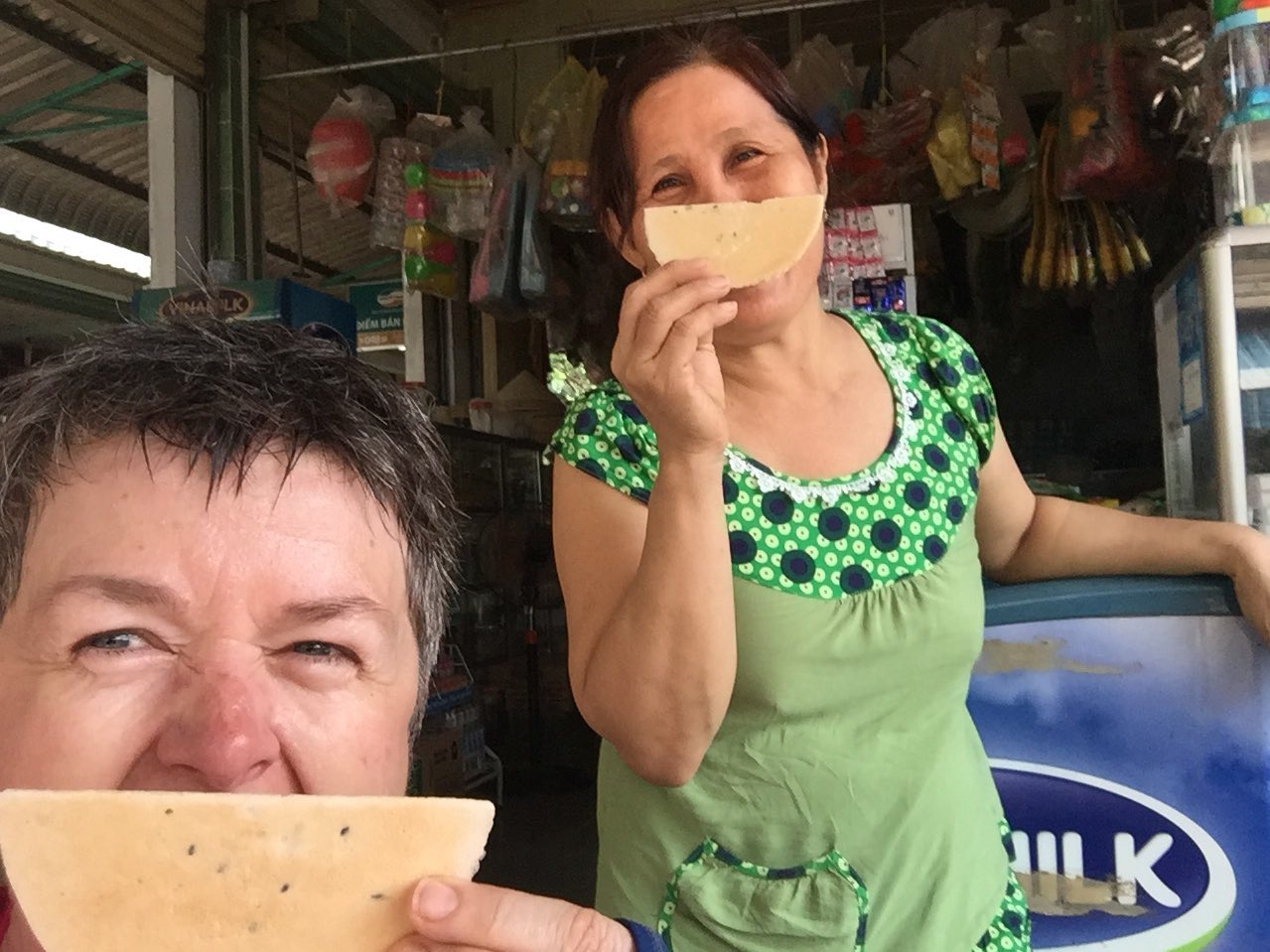 I flew to Vietnam in May and since the journey is 24 hours I carved out time for riding a bicycle before and after my work with Habitat for Humanity. That was an excellent idea for so many different reasons because physically I could unwind from airports & planes and secondly to explore a country on two wheels gets you up close and personal.

After landing in Ho Chi Minh City I traveled to the Mekong Delta with the Spice Roads guide/translator and their driver. It was Low Season therefore I had a private tour which was EXTRAordinary!!

The photo above is one of the women I met in a tiny town. We bought tapioca crackers & to me it looked like a smile so I gave her one and indicated that I would take our photo with our cracker smiles! I do not speak Vietnamese and she didn’t speak English but obviously it’s not needed when you smile as that’s universal!! 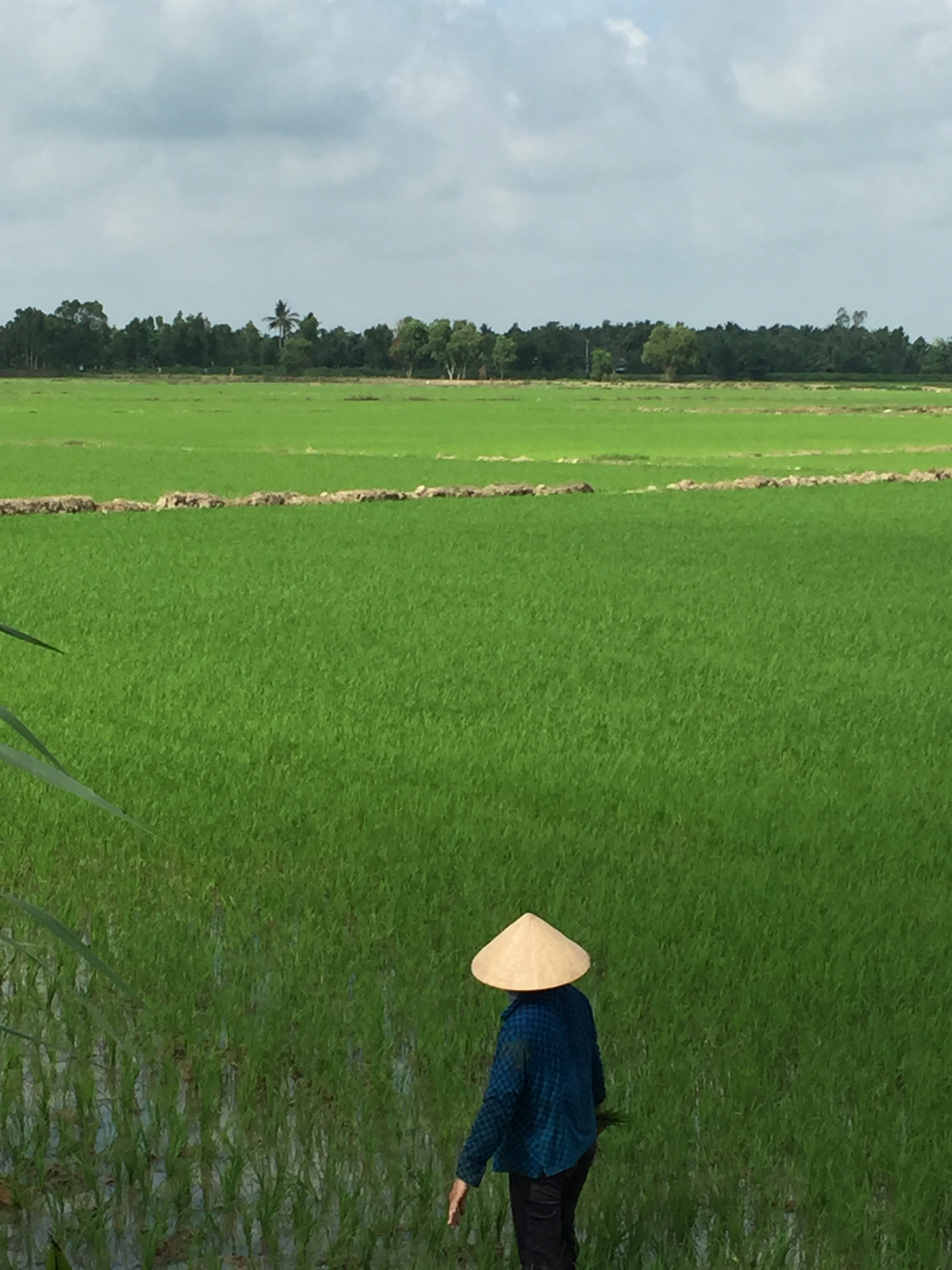 As we meandered on two wheels along the mighty Mekong it spreads into tentacles and tributaries in southern Vietnam, making the delta fertile and the region one of Vietnam’s highest producers of rice, vegetables and fruits. Cycling through rice paddies, orchards, along and over a myriad of small irrigation canals provided a unique view of Vietnam. 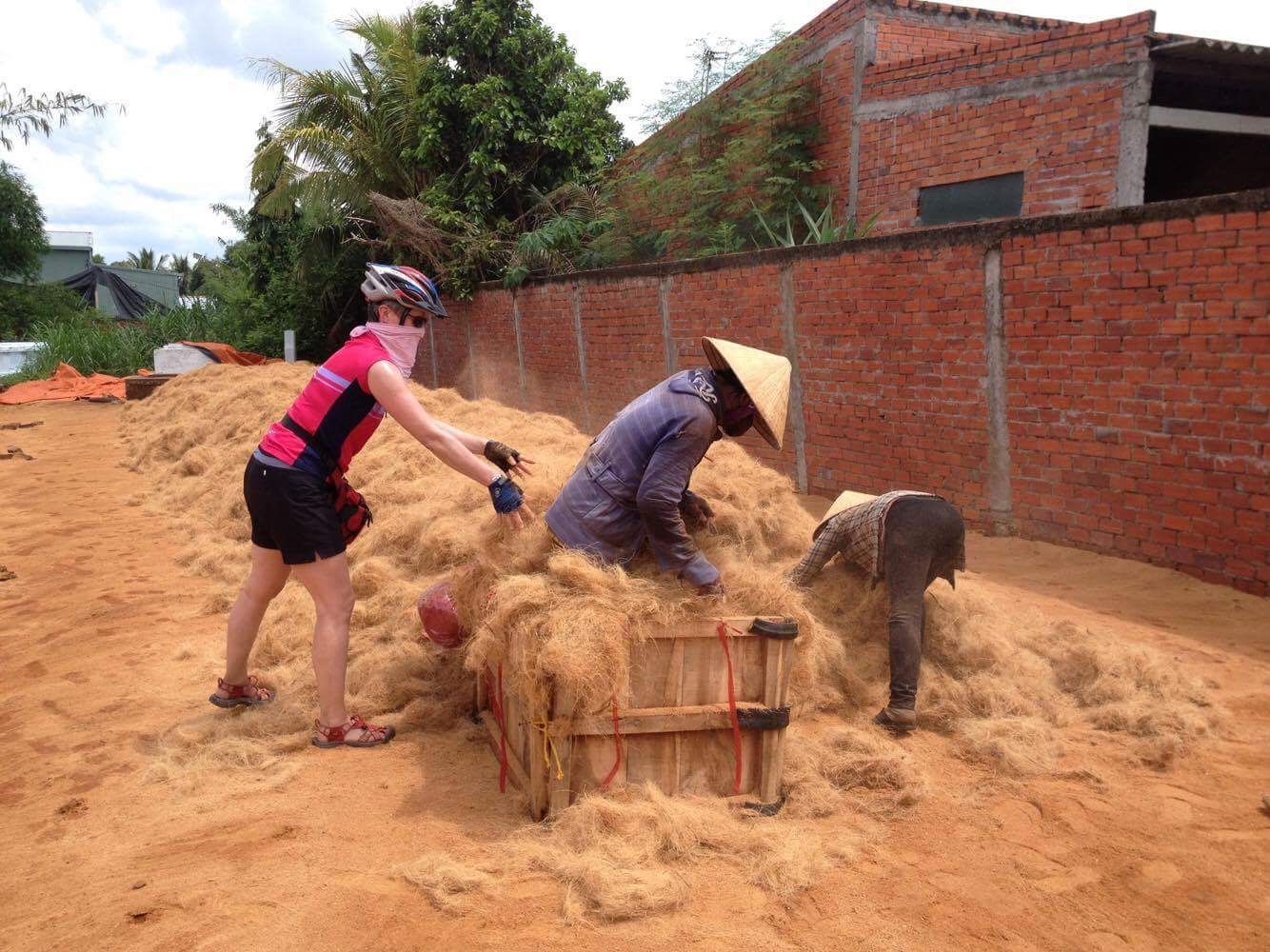 Choosing pedal power is rewarding for me as it makes the world feel a whole lot smaller when you can easily engage with people traveling in their neighbourhood. We watched these women gathering coconut fibre and I was able to easily step in and experience what that job was like. It was extremely hot at 37C and so dusty! They enjoyed and laughed at my attempt to assist them.

Check out the process of making coconut fibre. 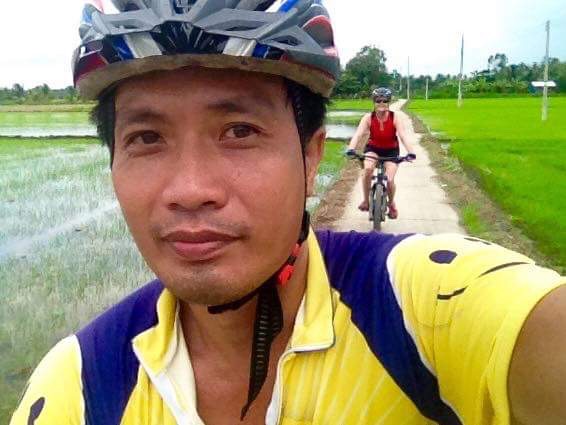 Cycling in the RICE BOWL with my guide, I thought a lot about the word “paddy”, it’s derived from the Malay word padi, rice plant. Paddy fields are the typical feature of rice farming in east, south and southeast Asia. Rice production in Vietnam in the Mekong and Red River deltas is important to the food supply in the country and national economy. Vietnam is one of world’s richest agricultural regions and is the second-largest (after Thailand) exporter worldwide and the world’s seventh-largest consumer of rice.

The Mekong Delta is the heart of the rice producing region of the country where water, boats, houses and markets coexist to produce a generous harvest of rice. Rice is a staple of the national diet and is seen as a “gift from God”.

The Mekong River and its tributaries are crucial to rice production in Vietnam. A total of 12 provinces constitute the Mekong Delta, popularly known as the “Rice Bowl” of Vietnam. 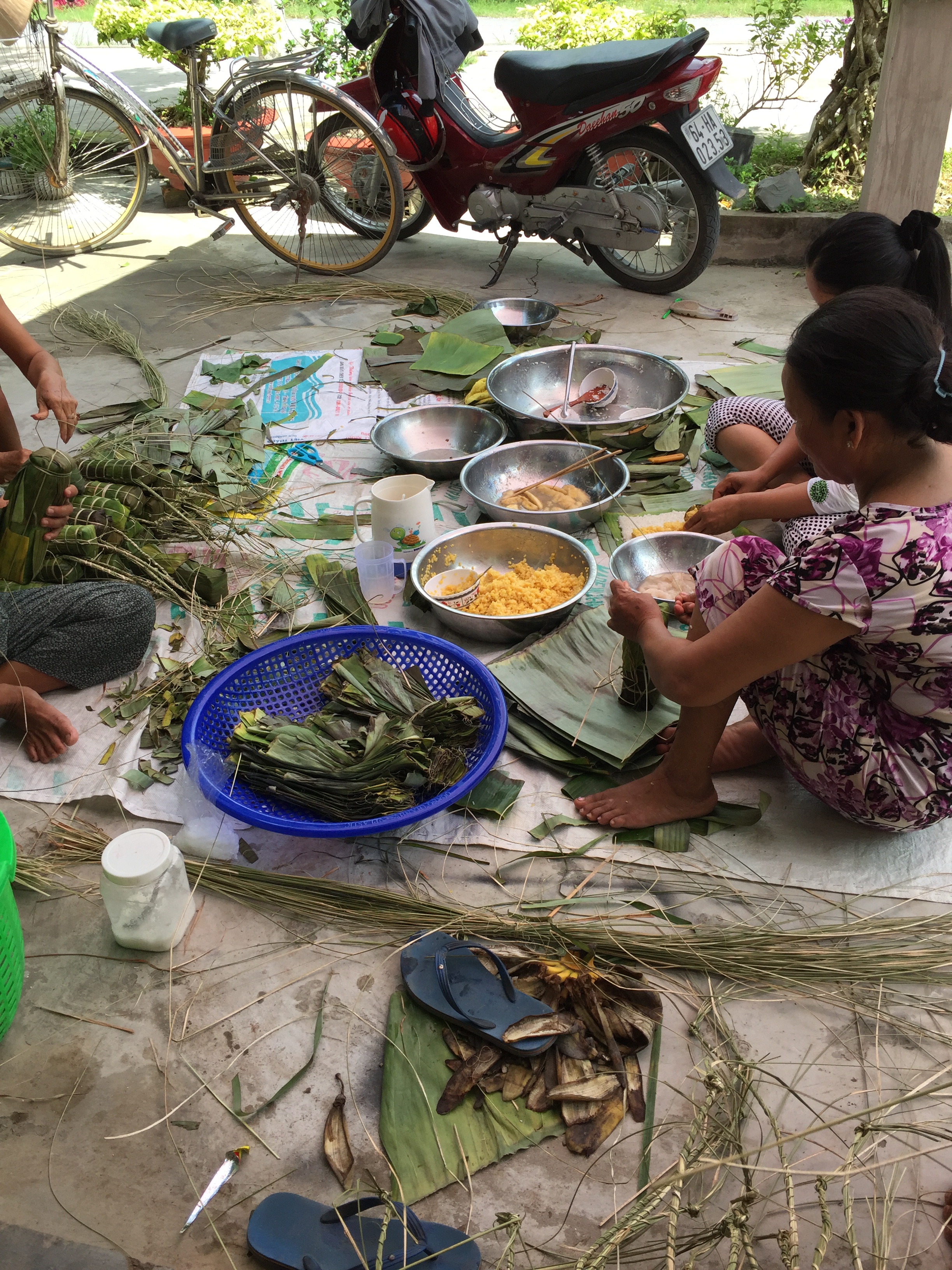 As we cycled we came across a group of women of all ages making fifty banana & sticky rice cakes that would be steamed in banana leaves for 12 hours. This food was for a party to remember the dead. We stopped and helped!

The country has experienced significant economic growth in the past two decades as the country shifted to a market-style economy. A driving force for the future is Vietnam’s strongly motivated and educated population—the country boasts a 90 percent literacy rate. 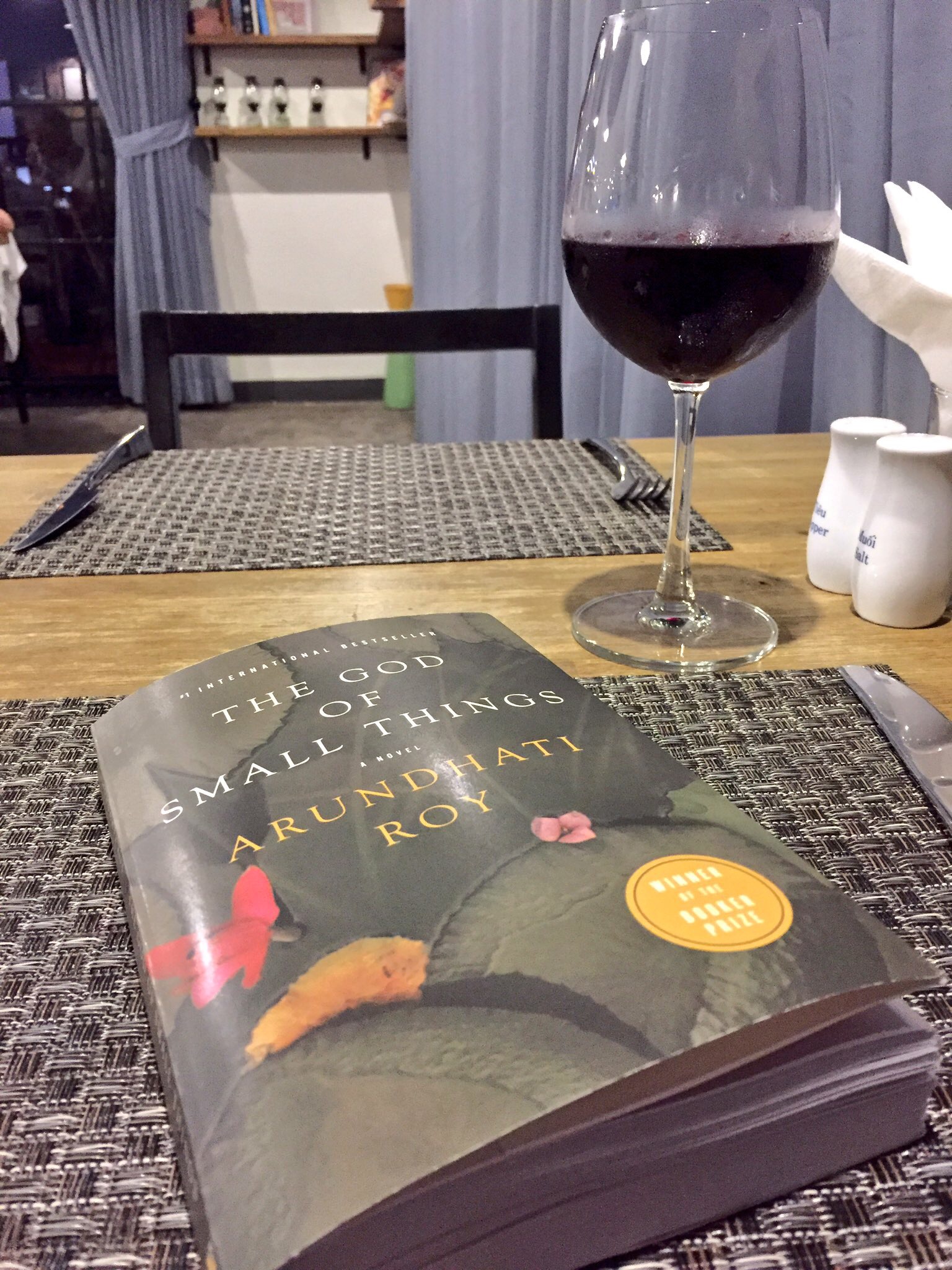 What was I reading during my travels? I took with me The God Of Small Things by Arundhati Roy. The photo is from the elegant and literary The Alcove Library Hotel in Saigon.

Why did I choose THIS book? Because I had never read it! Published twenty years ago to international bestseller status and with a new novel, her first fiction in twenty years coming this fall, I felt I needed to spend time with this “breathtaking masterpiece”.

I worked in Kerala, India in 2013 and Roy’s lush evocative descriptions were intensified for me as along with the heat and humidity of Vietnam. It was the perfect narrative companion for my adventure.

Even though Vietnam is one of the world’s fastest growing economies, there are presently 4.6 million poor households, according to the government’s own statistics. Recent data show that 7,000 billion dong (about US$433 million) in financial support is needed for 700,000 households living in poor conditions. 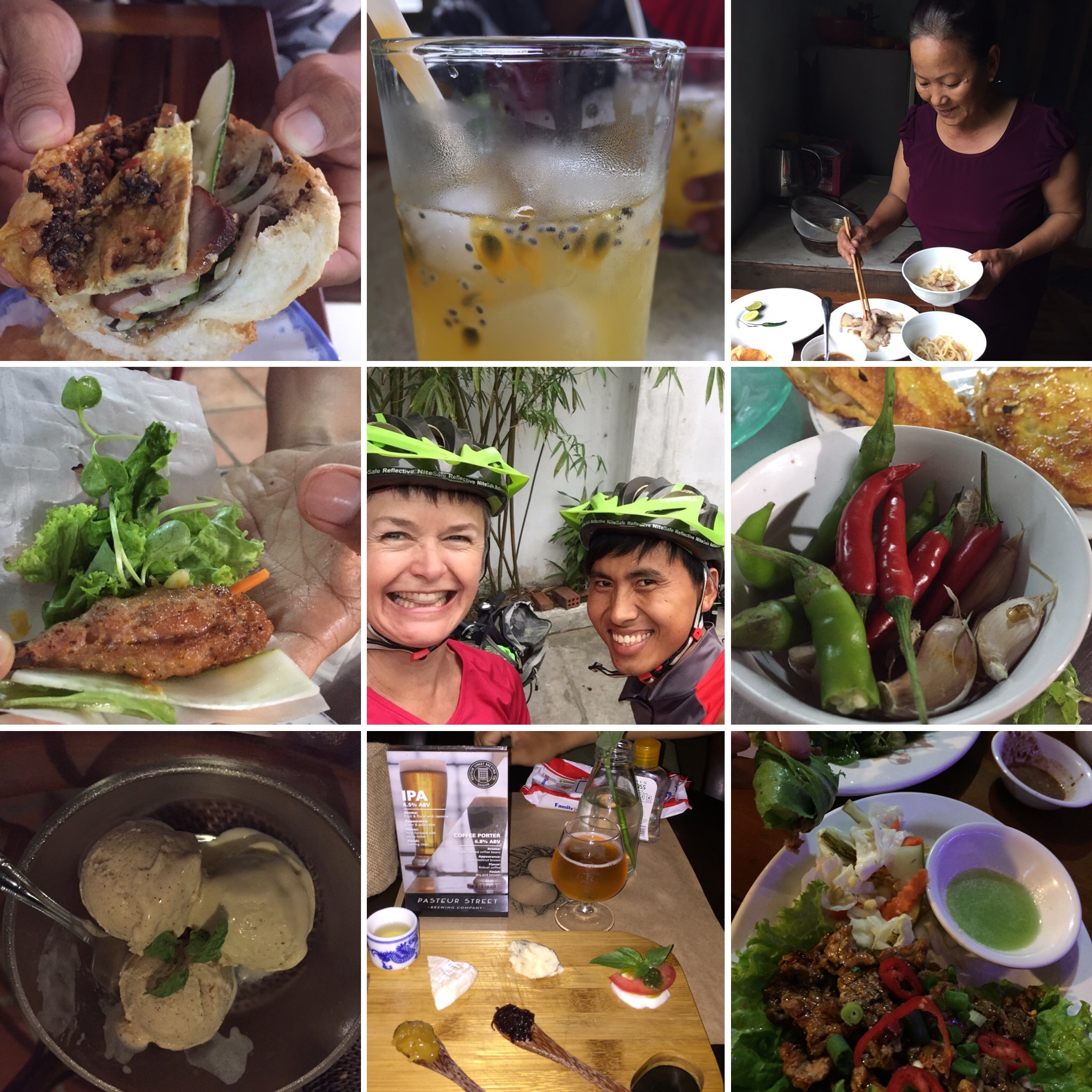 I’ll discuss my experience with Habitat for Humanity another time as this post is more about velo love.

At the end of two weeks in Vietnam I participated in a private culinary tour on bicycle in Hoi An with Grasshopper Adventures.

OMG the food has been so incredibly delicious everywhere with fresh simple spicy food whether in restaurants or the awesome street food! This tour started in the city getting a Bánh mì sandwich. Bánh mì means bread or more specifically baguette which was introduced by the French during the colonial period in Vietnam. The baguette is made with rice flour along with wheat flour.

Then we cycled outside the city through the farmers’ fields and yes then into a farmer’s kitchen for her special dish with a secret sauce! 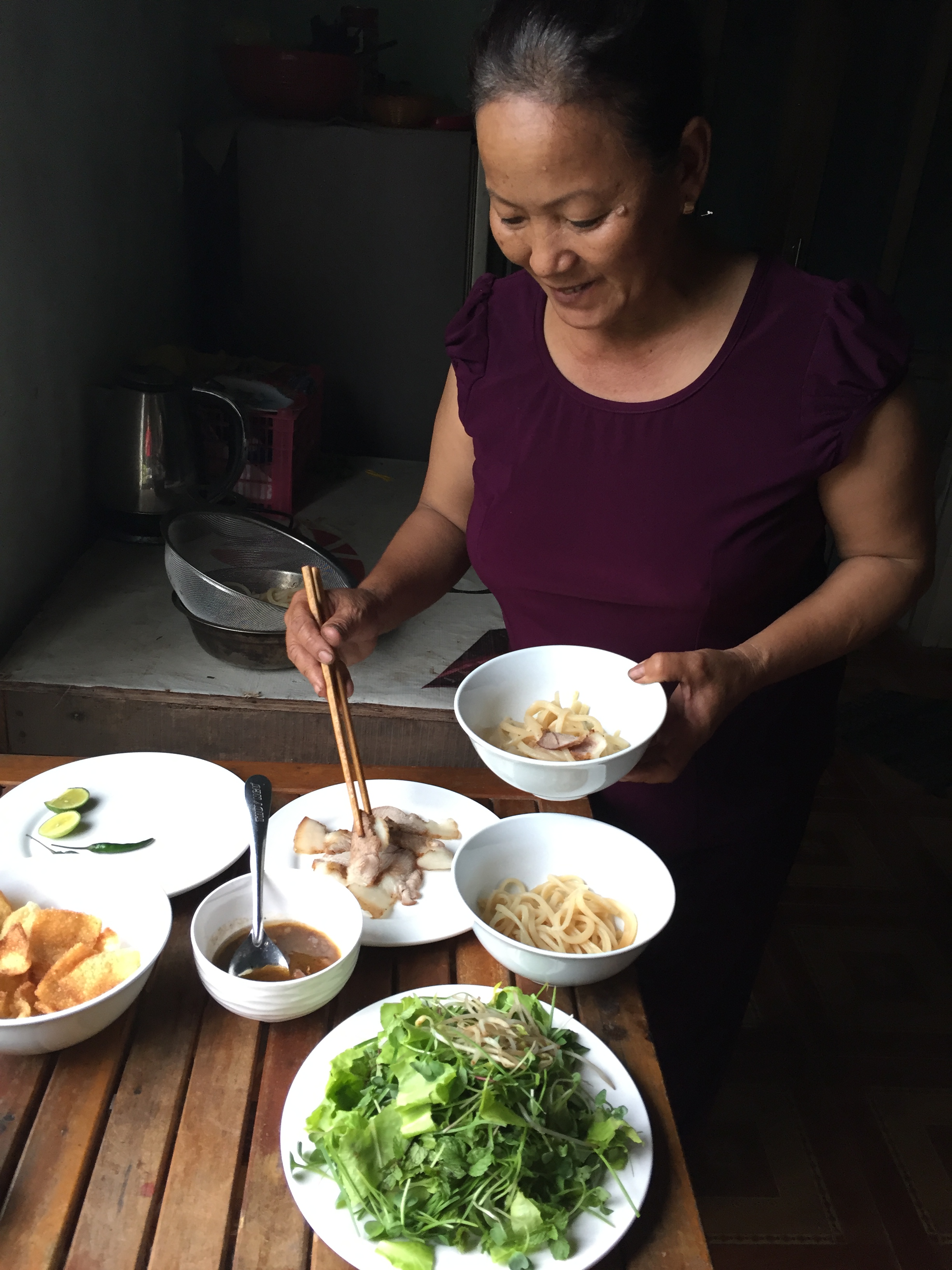 By the end of the evening after five stops for a variety of dishes including bbq, beer, cheese, ice cream, rolls and more! I was thankful I was on a bicycle as I could continue to generate an appetite and then my guide took me back to my hotel on his motorbike.

What an unbelievable trip!!

write your own life

My life has been overflowing with exotic travel, events and emotions which I am so grateful to be physically able to execute and have the ambition to challenge myself.