Verve means lively and forceful enthusiasm, vigor and spirit, vitality. Does this sound like anyone you know?! 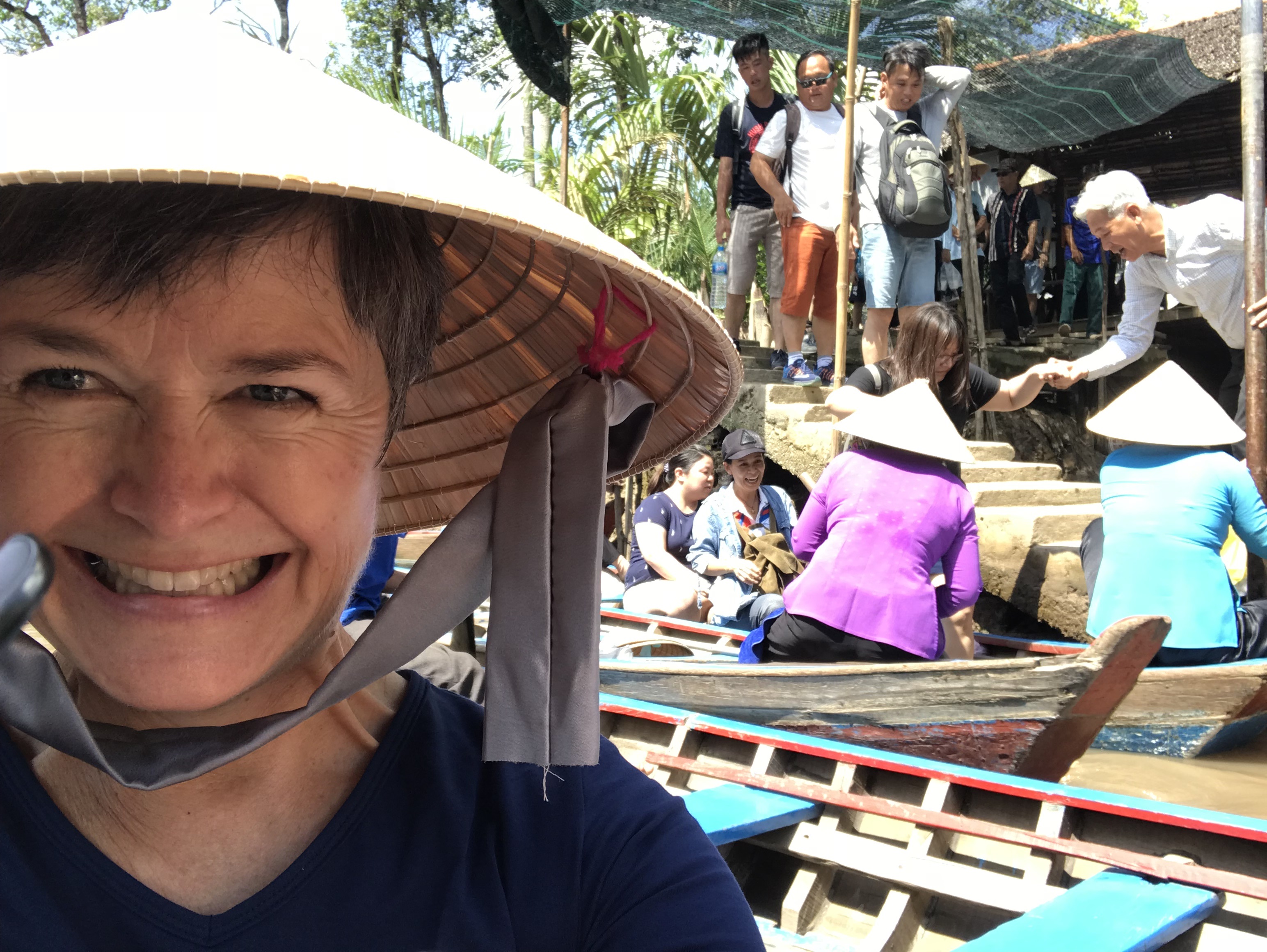 My return journey to Vietnam began in January 2018. It was at the Habitat for Humanity Canada office in Toronto that I was invited to lead my first team to Vietnam! I had trained for the role of a Team Leader last fall but I wasn’t sure if I was going to lead a trip in 2018 as there was already so much happening in my world! At that time, I was recovering from shingles and preparing for a trip to Russia to speak at the Winter Cycling Congress. But as you can guess, I said yes! I love saying YES because the door is open and an opportunity can present itself. If I had said no, I knew I’d regret the chance to go back to Vietnam.

Vui vẻ is pronounced vooy veh and means “happy or elated” which I certainly was when I returned to the literary Alcove Library Hotel in Ho Chi Minh City. It’s a great little boutique hotel that offers a sanctuary of books within a chaotic city. 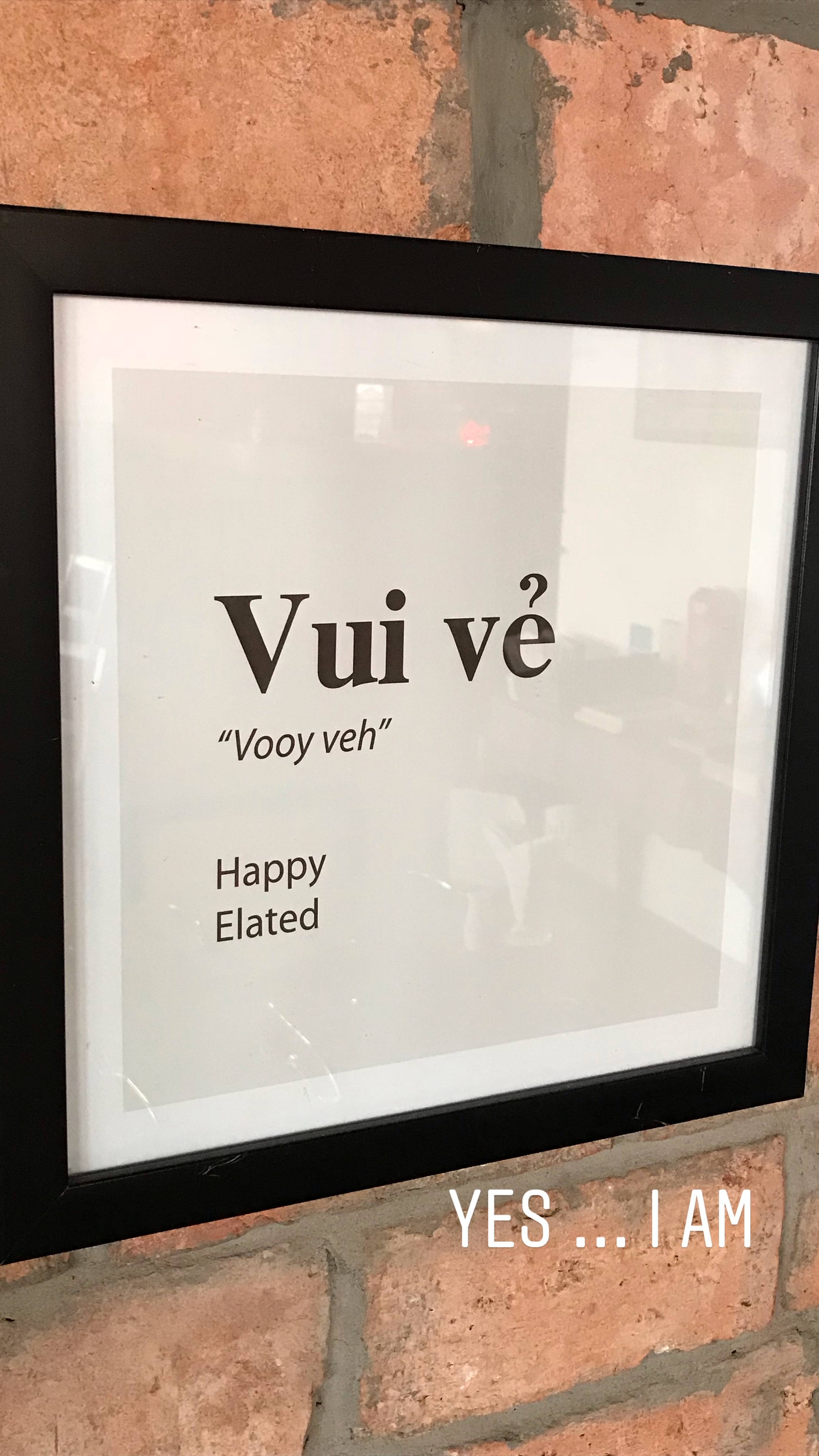 They have a great restaurant on the 5th floor with a delightful view. Their morning breakfast included coffee, lime juice, fruit, yoghurt, baguette, jams and a choice of a main western or Vietnamese meal. Wow, eh?! 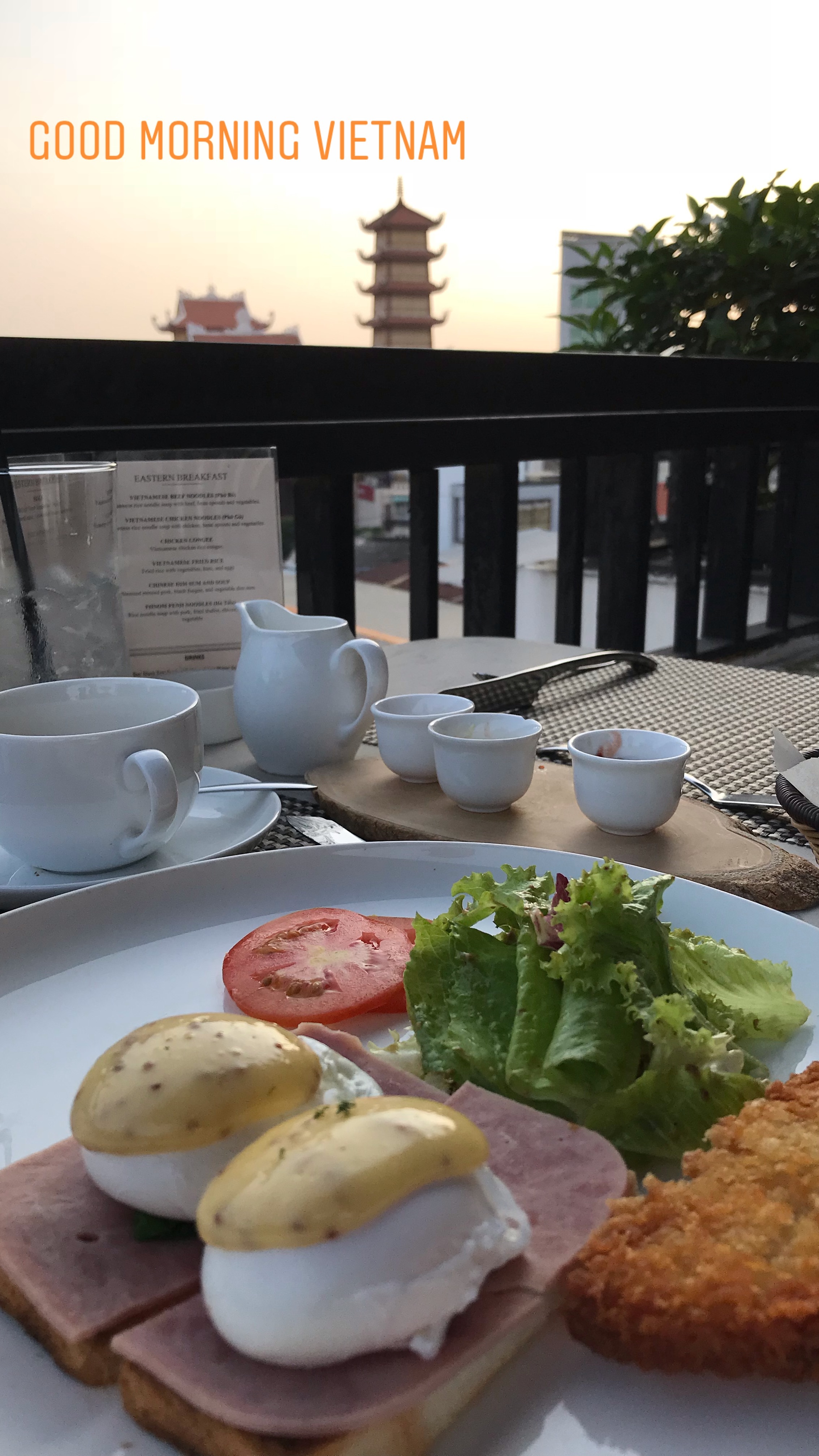 On this particular morning, I selected the eggs benedict.

During these days/daze before the Vietnam Big Build (I’ll explain what that means in a separate blog post), I booked a couple of bicycle tours in the Mekong (meaning Mother River) Delta. It is a vast area in southwestern Vietnam encompassing over 40,500 square kilometres. The region has 12 provinces within it and is known as a biological treasure trove with over 1,000 animal species. It is also susceptible to flooding due to being a low-lying coastal area. The Climate Change Research Institute at Cần Thơ University, in studying the possible consequences of climate change, has predicted that, besides suffering from drought brought on by seasonal decrease in rainfall, many provinces in the Mekong Delta will be flooded by the year 2030.

Life in the Mekong Delta revolves around the river and many of the villages can only be reached by rivers and canals rather than by road. Cycling through the region on a bicycle allows for access that vehicles do not have. 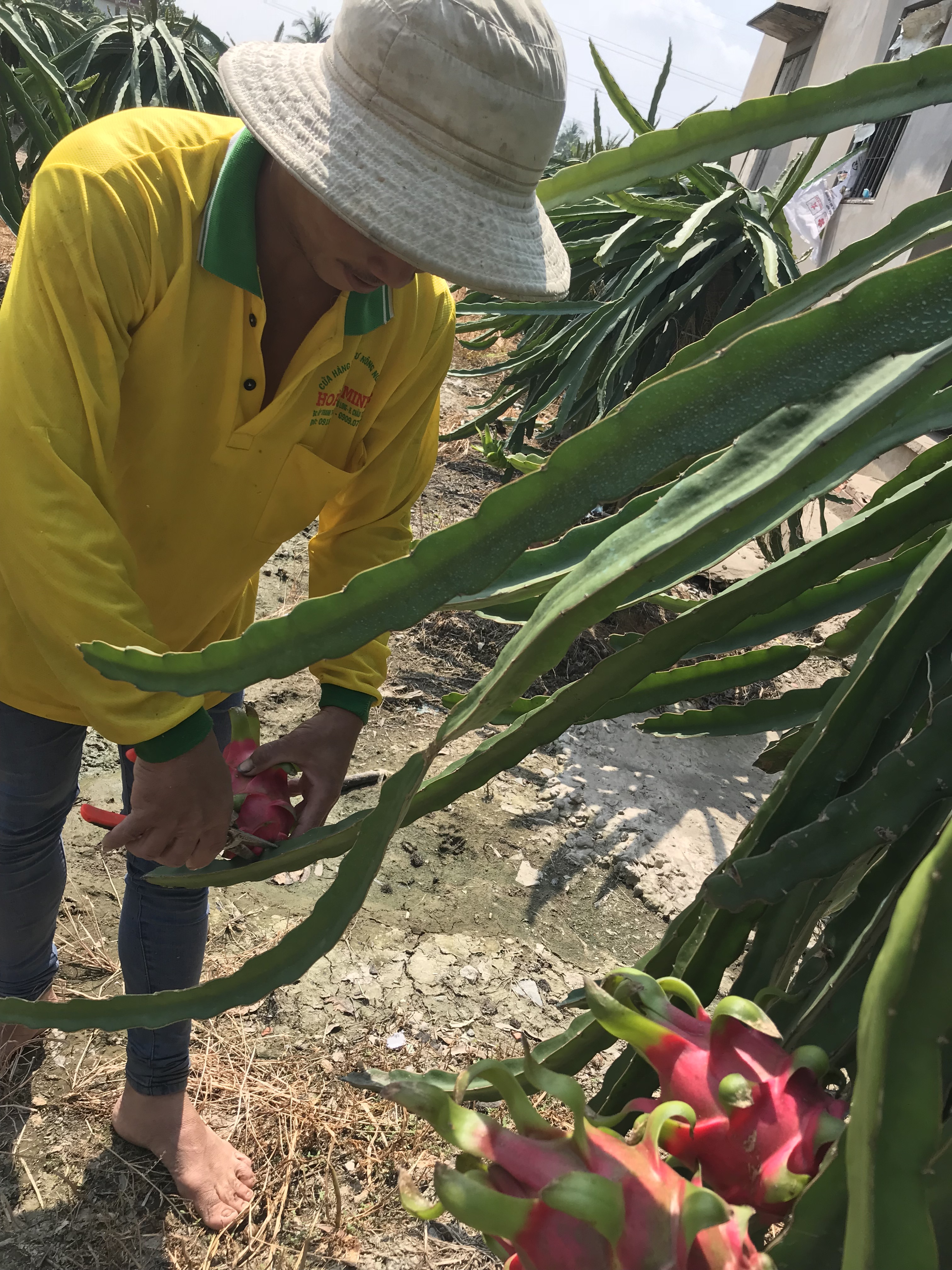 Dragon fruit, also known as pitaya, is one of nature’s most unique looking plants. It has a flower with an explosive looking flame and fruit like a pink rosebud. They come in three types all with a leathery, slightly leafy skin. There is a white and red flesh variety (which I tried and loved!) and a yellow flesh which I’ve never seen. Once cut they are incredibly easy to peel. 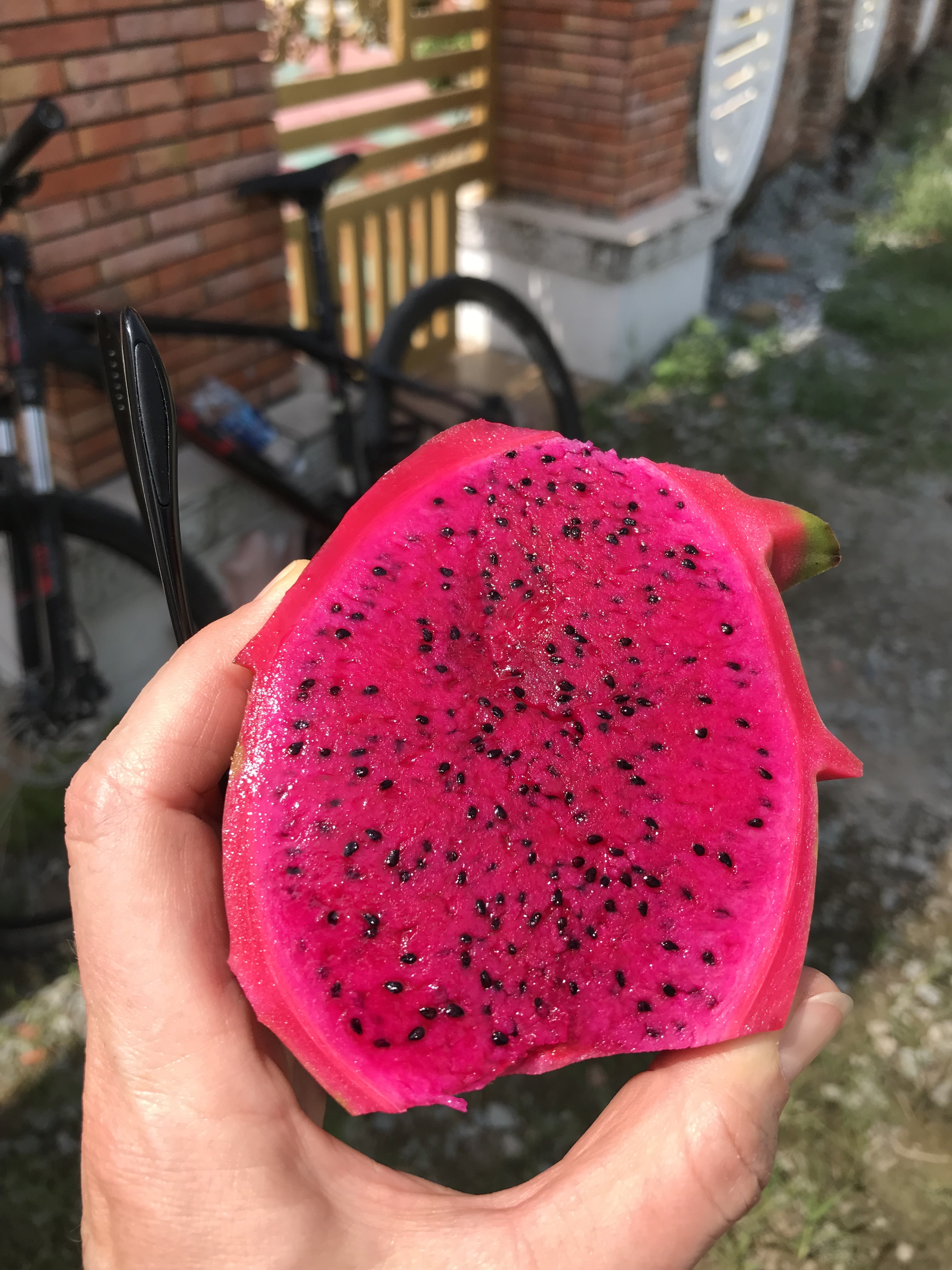 The fruit’s texture is likened to a kiwifruit because of its black, crunchy seeds (rich in lipids). The Pitaya flowers bloom overnight and usually wilt by the morning. They rely on nocturnal pollinators such as bats or moths for fertilization. The plants can flower three to six times a year and as part of the cacti family, if a healthy piece of the stem is broken off, it may take root in soil and become its own plant. The stem looks and feels like an aloe plant.

I love street food in Vietnam. My first of the bicycle trip was a quick stop for banana cake. 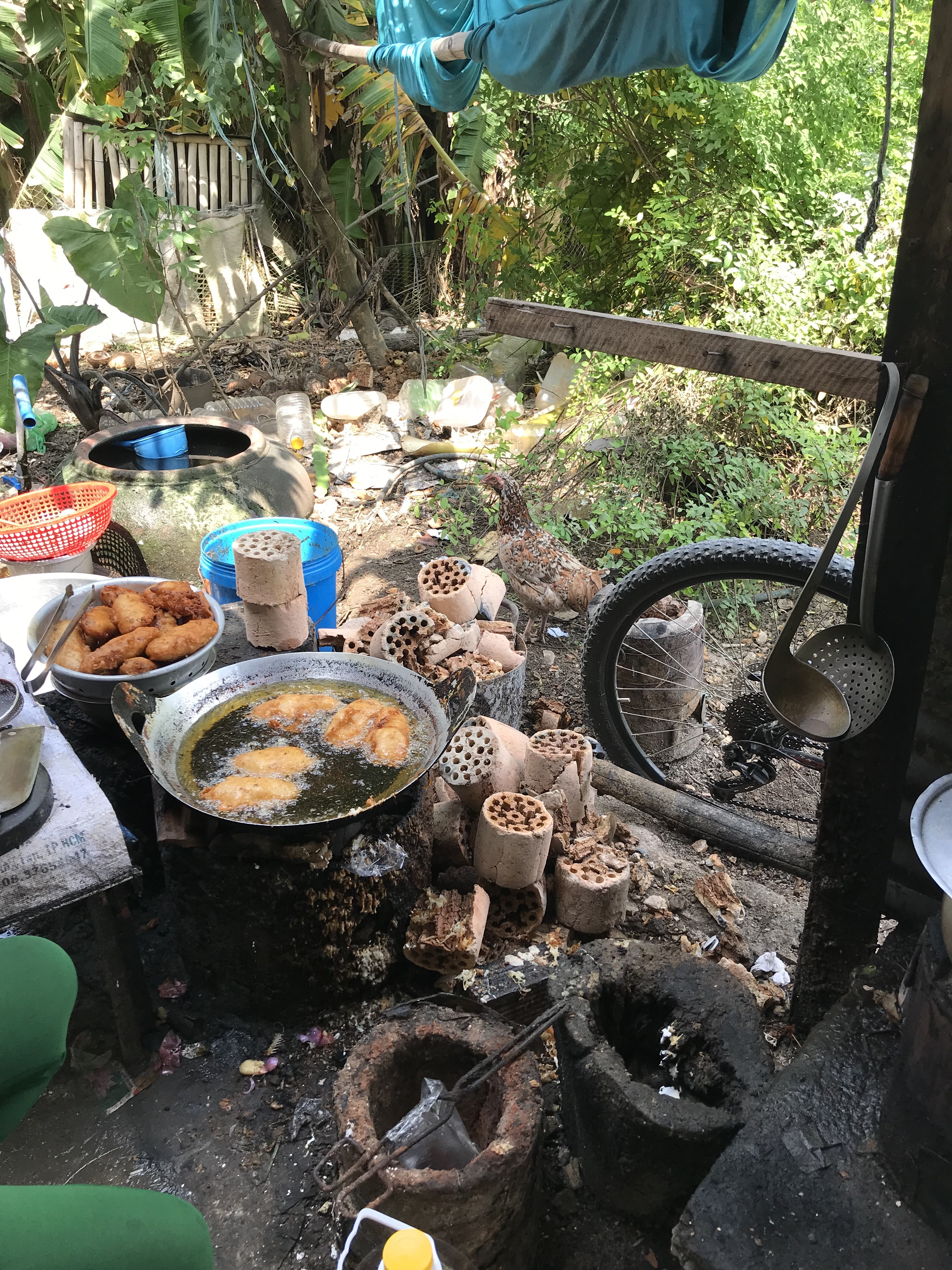 Fresh bananas. Battered and deep fried on a hot day. AND did I tell you? It’s 33C and we are cycling on a variety of trails that are paved, gravel and dirt. So a freshly made banana cake hit the spot.

Next we needed to quench our thirst! 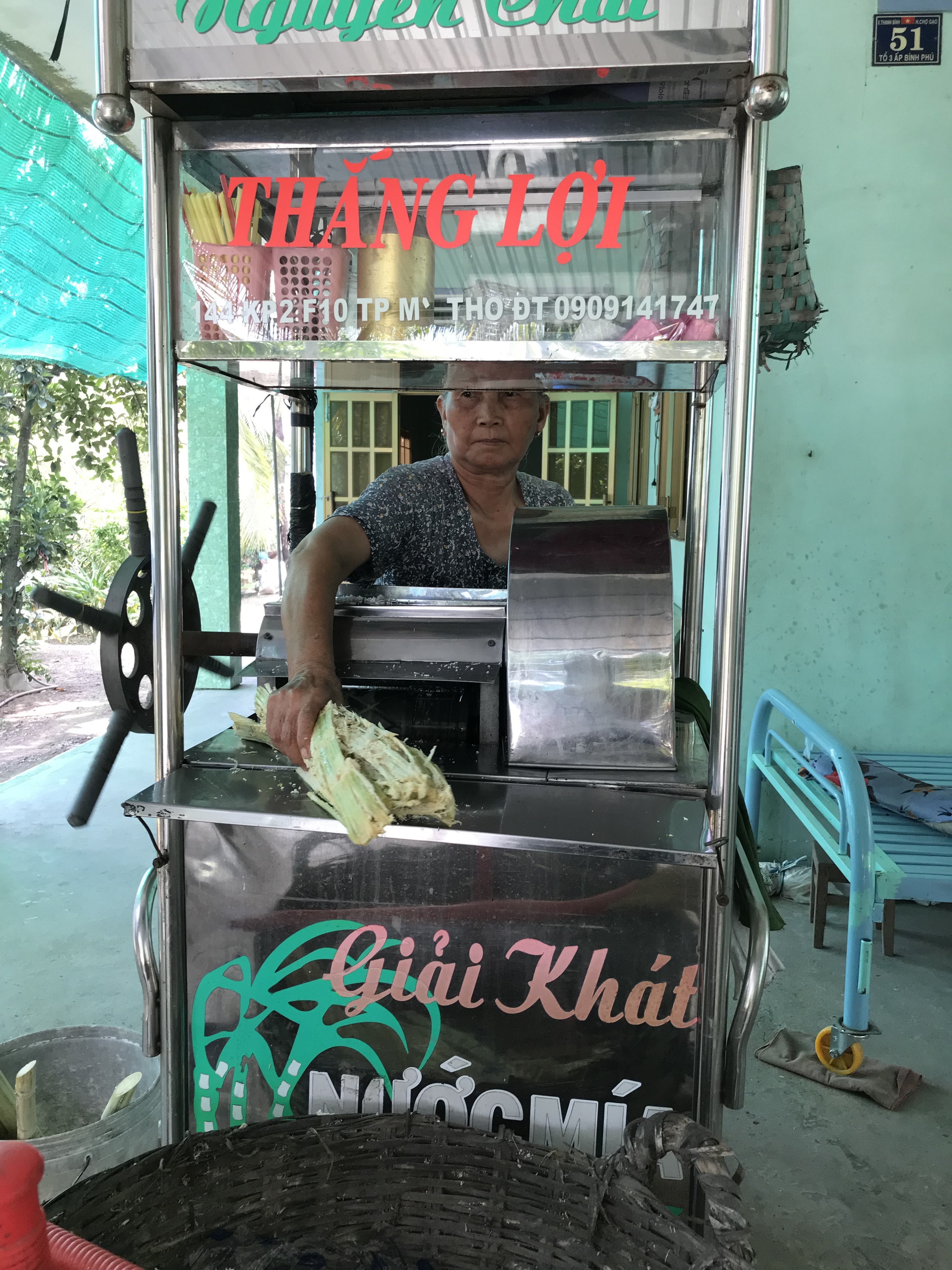 The wonderful woman making us a sugar cane, kumquat & coconut drink over crushed ice is 72! After she pressed these three ingredients together, she sat cross legged next to me and touched my skin and laughed with us. Laughter is a universal language. 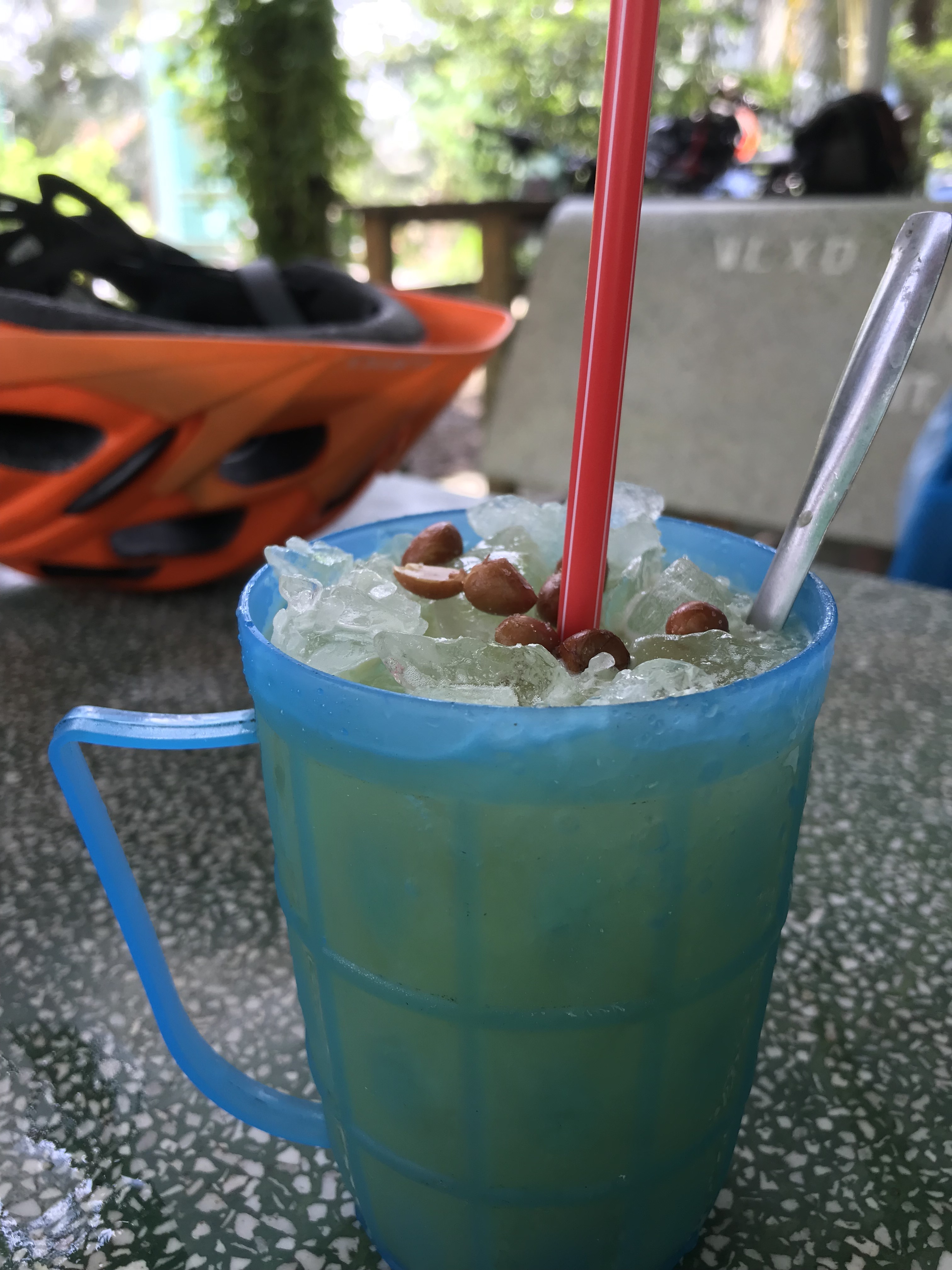 On top of the crushed creation are peanuts! Truly this was the most delicious drink I’ve ever had.

The 23 km bicycle day ended. I wouldn’t use this company again (I don’t want to diss them in this forum) as their bicycles were not in great shape but for a one day tour right after 31 hours of travel, it satisfied my need to move after being confined in airports and on planes.

I really wanted to take a cooking class in Saigon as I love Vietnamese food! MOM (stands for mystery of mom) Cooking Class offered a start in the Cau Muoi market where we would select our ingredients with the locals. 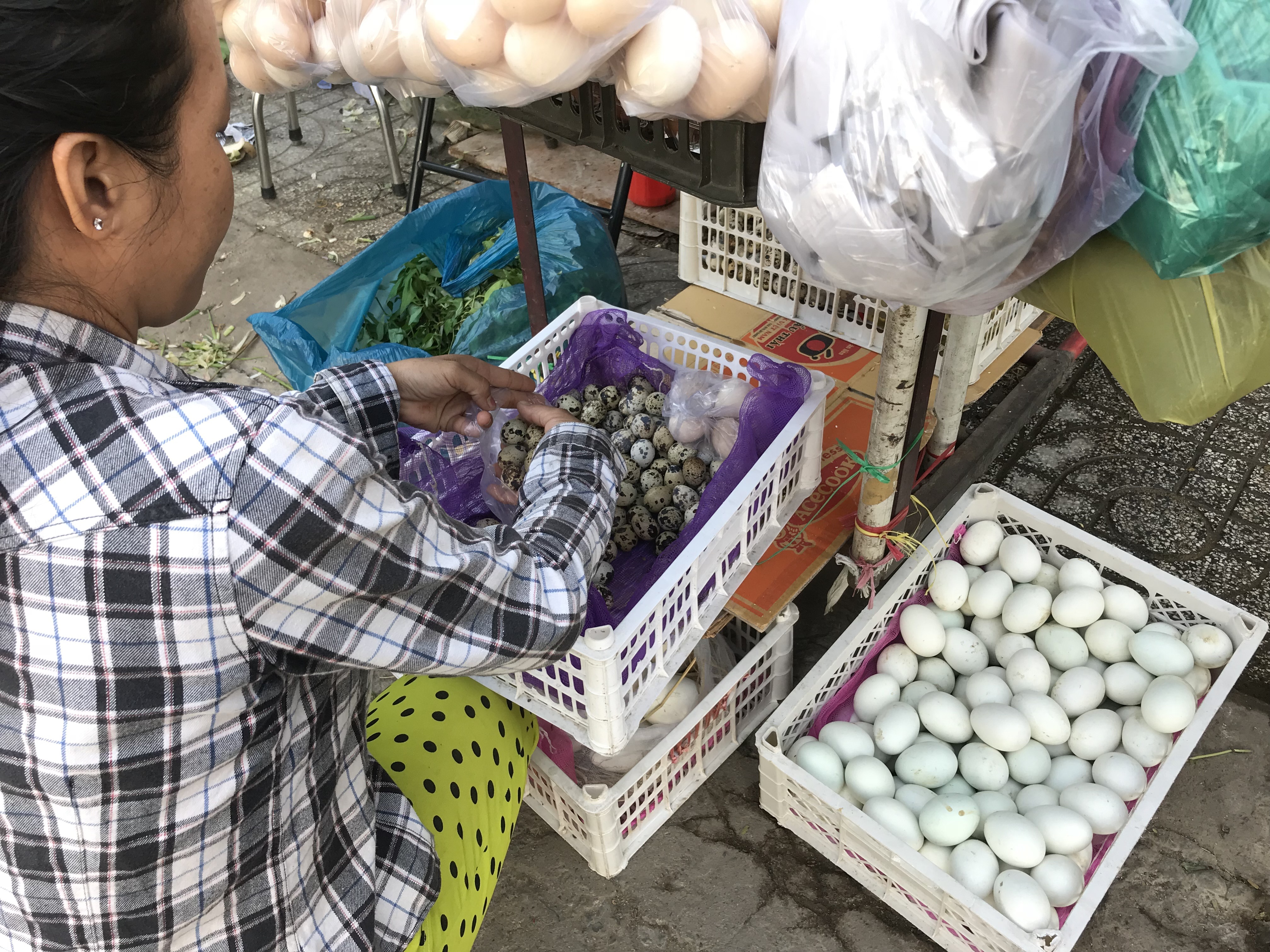 After shopping, we had a welcome detox drink and then started to cook!

First we made chả giò miền and nước mắm chấm which is traditional spring roll with glass noodles and a dipping sauce with lime juice and coconut water. 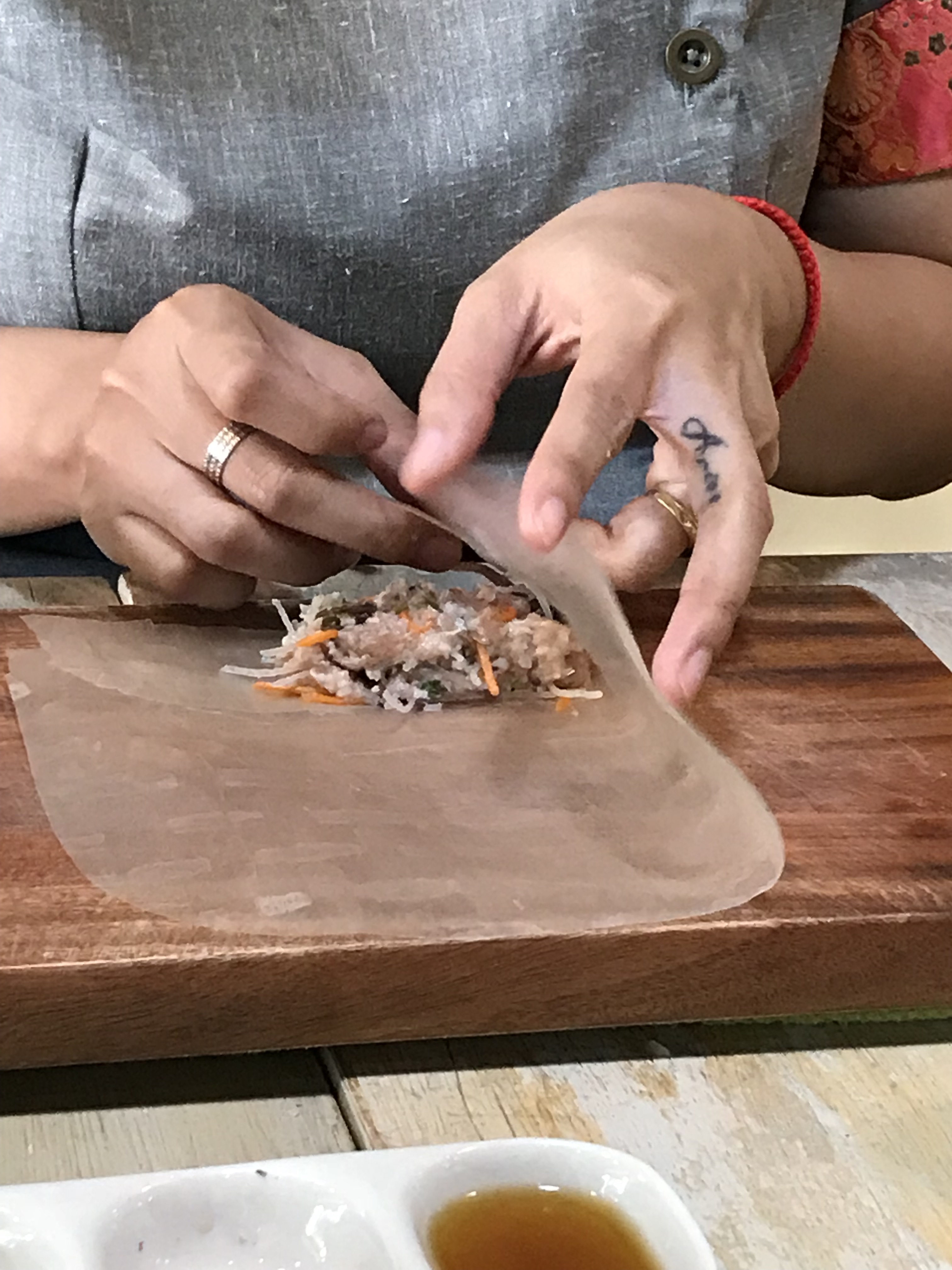 The instructions were easy and the instructor provided a well paced lesson to keep us learning, laughing and then eating after each dish! 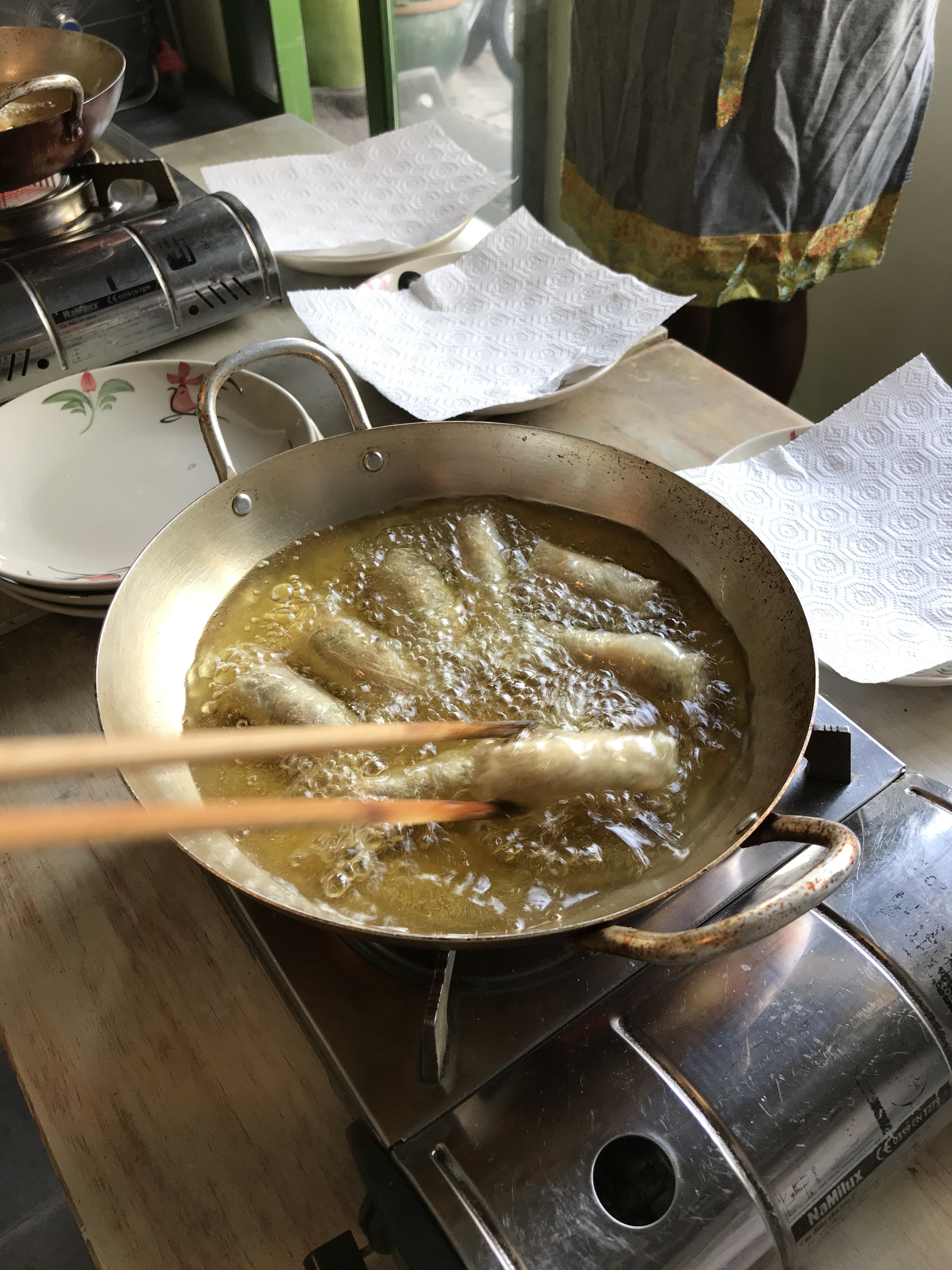 Next dish was my favourite! Gỏi Xoài Xanh which is green mango salad with dried anchovy. We learned how to use a super cool and dangerous tool that peeled the green mango. 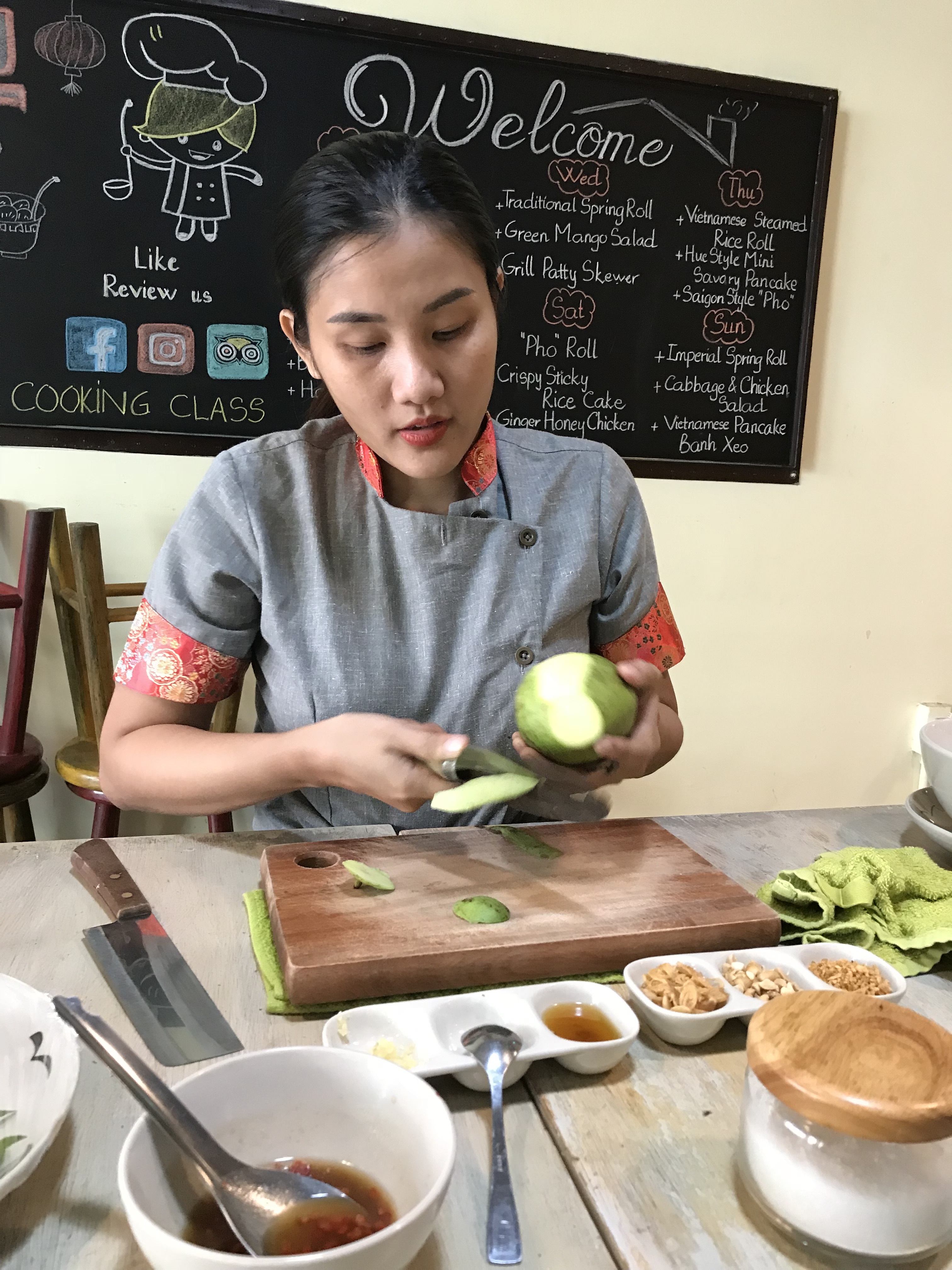 There’s a sauce for everything. The dressing for the green mango salad was nước mắm me trộn gỏi or fish dressing sauce with tamarind. 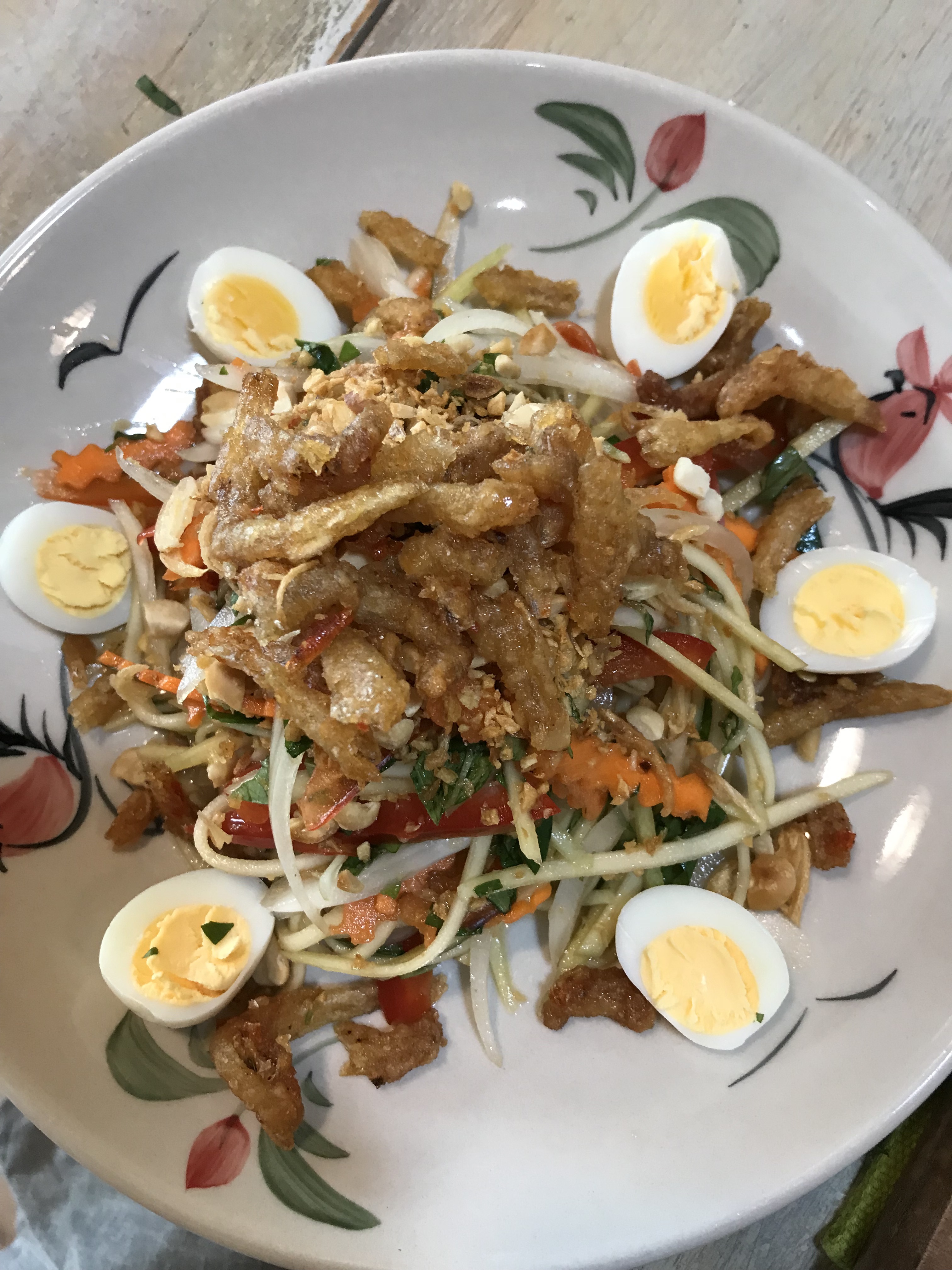 The salad included quail eggs! I made this salad. I really did and it was so flavourful!

We finished the morning with nem nuong or grilled patty skewer. A lot of work smashing the meat with a pestle until it was mixed and then you wrap it around lemongrass sticks. This was alongside tuong den dau phong nem nuong or dipping sauce with salted soya bean and chili oil. 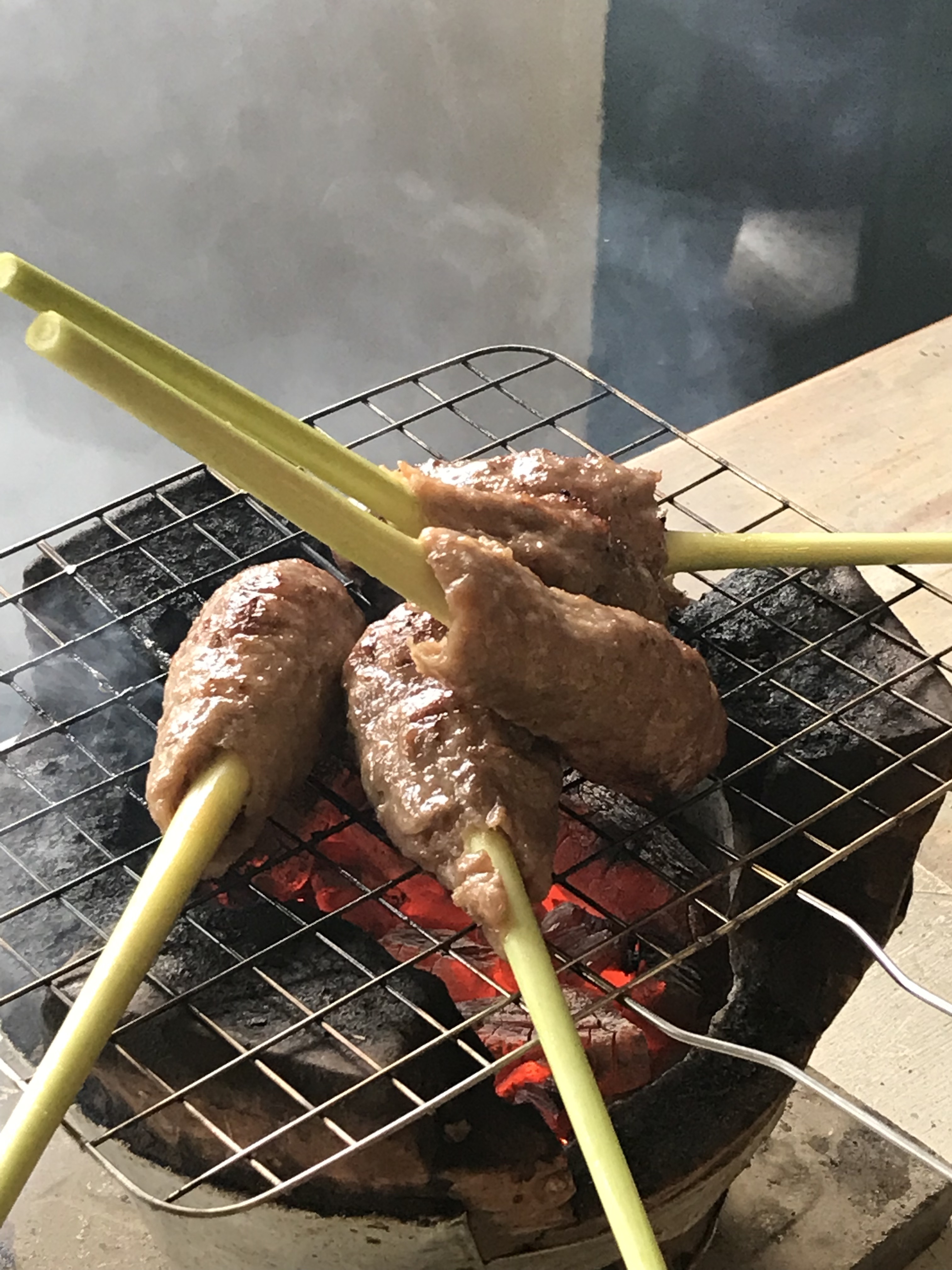 The patty skewers were cooked over a flame on a charcoal cooker in the atrium of the building as it got very smoky!

It was an amazing morning and I have an even greater appreciation for Vietnamese food. If you’re in Saigon, I’d highly recommend the MOM Cooking Class. There’s a different menu every day to cook!

I used Grasshopper Adventures last year for a culinary bicycle tour in Hoi An. It was AWEsome and so I was really looking forward to a full day bike tour in Mekong Delta.I was not disappointed. Actually they exceeded my expectations. Yen, our guide, met us in a coffee shop in Saigon. Starting the day with an iced Vietnamese coffee set the tone. A young woman from Australia joined us and we were off in a clean van with fantastic bicycles! The bikes had been labeled with our names, we were given a safety check and an itinerary for the day with lots of washroom breaks! 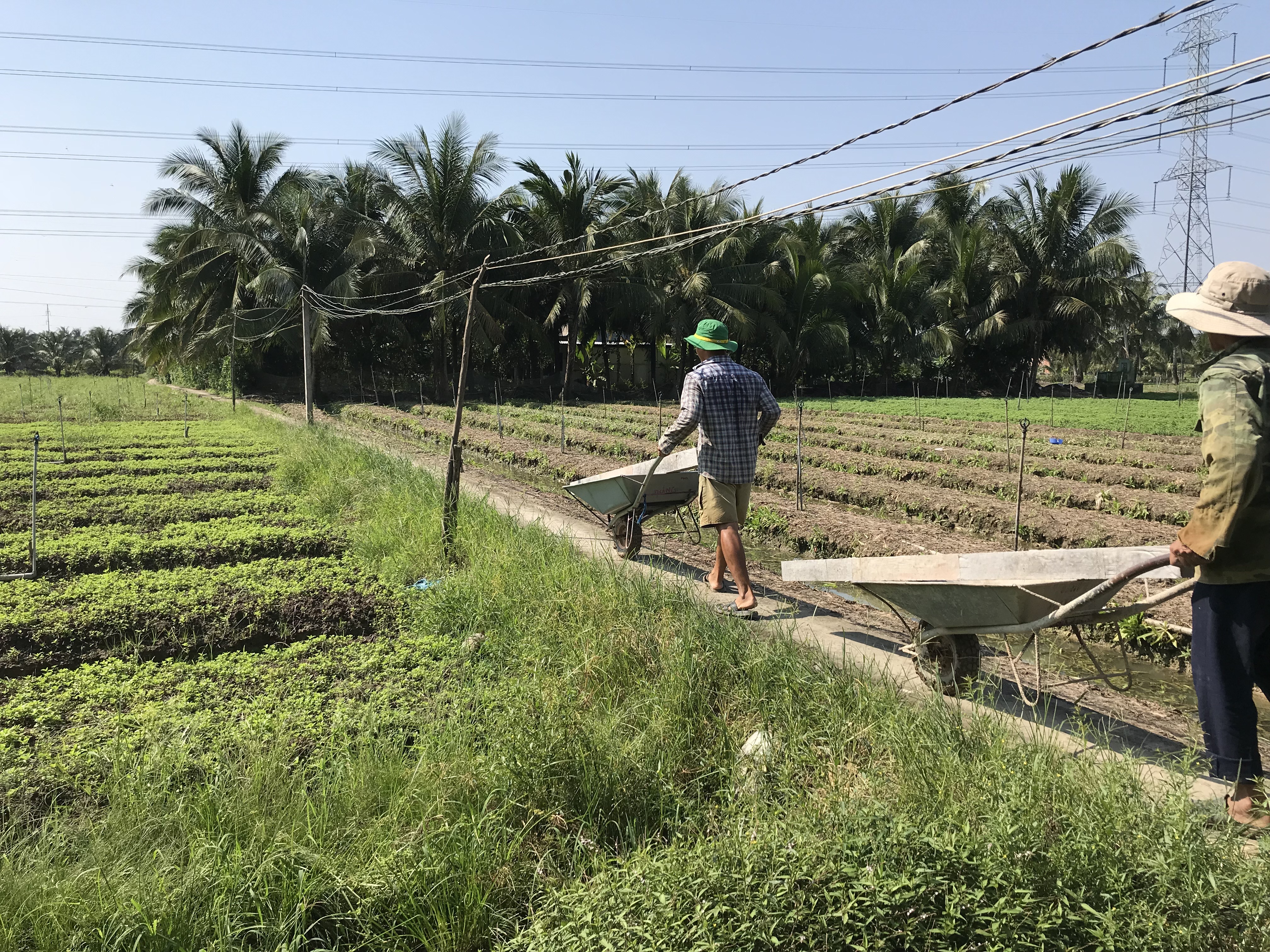 The Mekong river, which the locals call Song Me – the mother river – is perhaps the single most important element for livelihood and production not only for this region, but for the whole of Vietnam.

Extensive rice paddies, mangroves, dragon fruit plantations, palm trees and banana trees provide a great share of the food production in Vietnam. Yet, the pace of life through the narrow waterways is slow and peaceful.

Our first stop was at a herb farm. After our cooking class the day before we recognized many of the herbs. 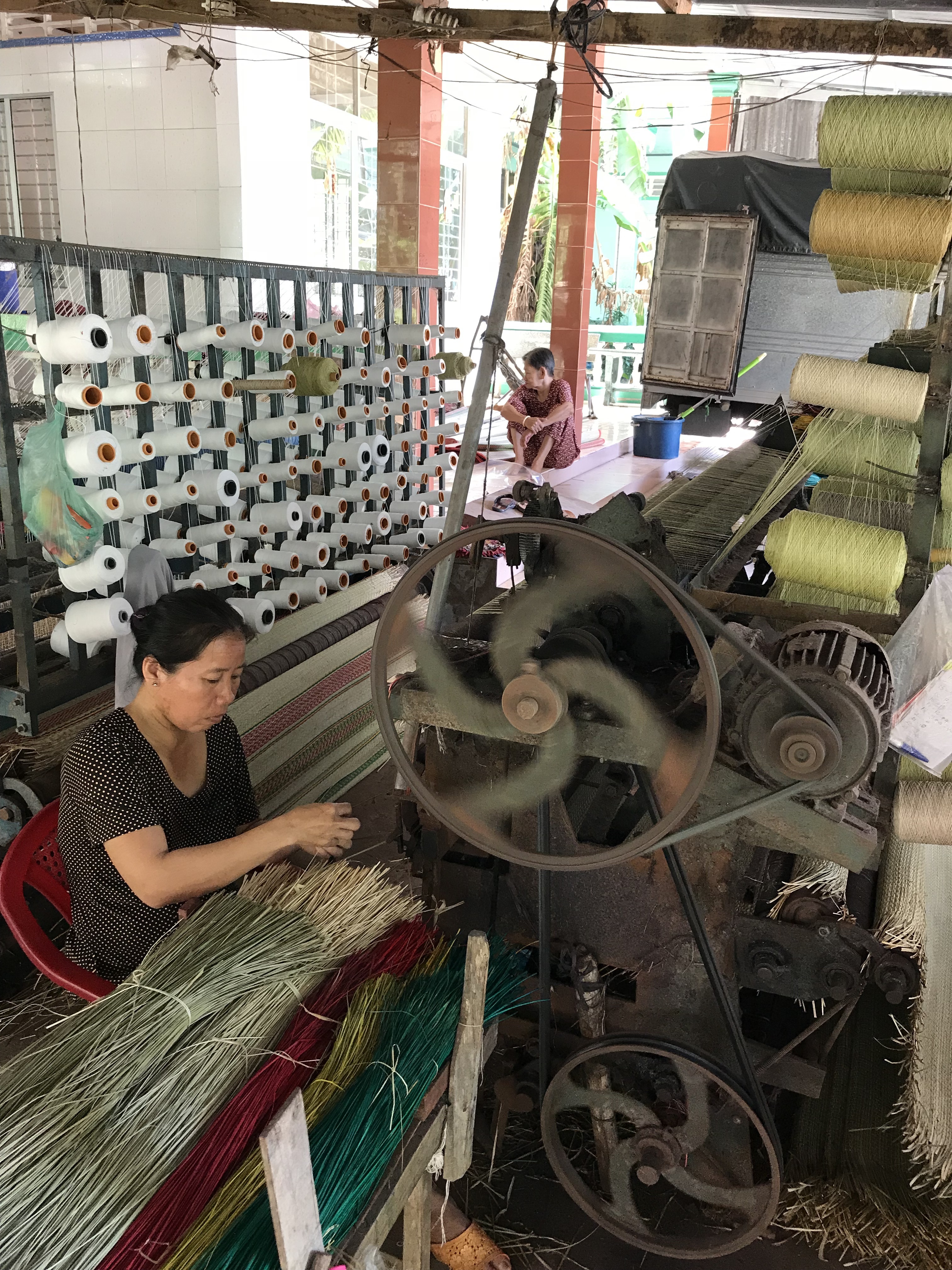 A small business owned by three generations of women provided a glimpse into how mats are woven.

We crossed canals in tiny ferries. We shared this one with two women on their way to a wedding traveling by motorbike of course. 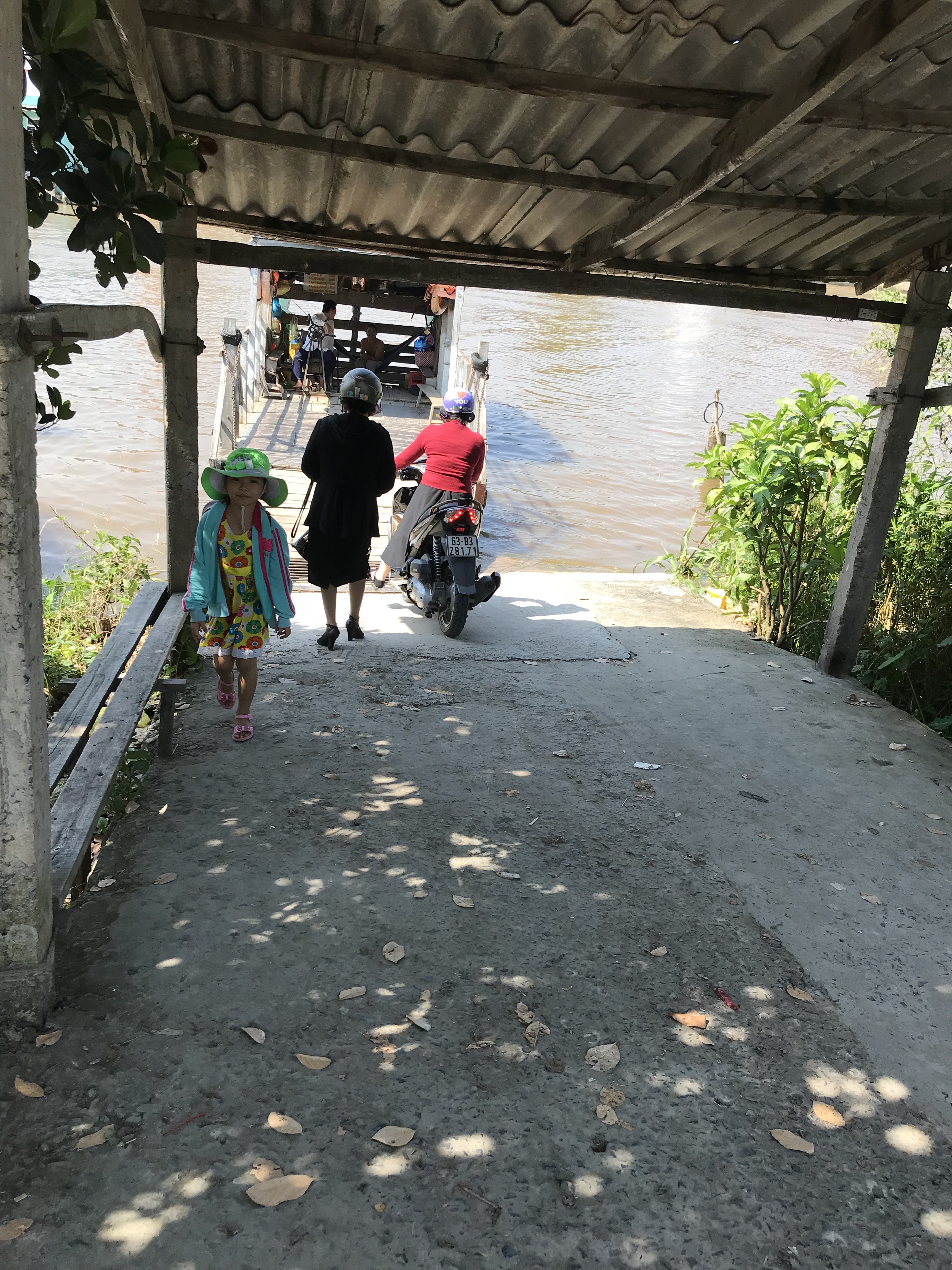 Scenes that I loved while traveling included women just riding their bicycles in a truly leisurely way. Keeping cool under their nón lá or leaf hat. 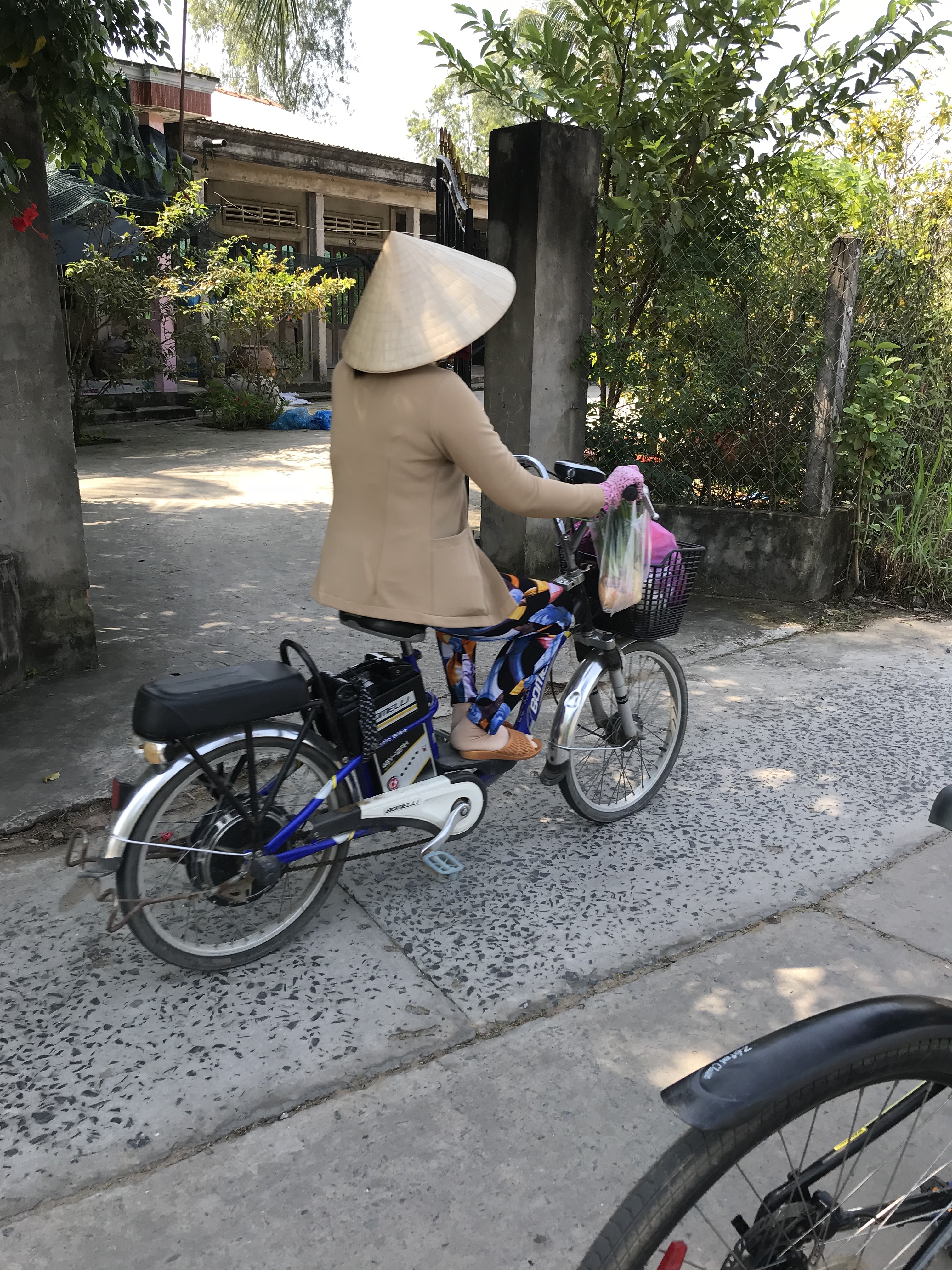 It is kept on the head by a cloth (often silk) chin strap. It is used for protection from the sun and the rain. Made of straw, it can be dipped in water and worn as an impromptu evaporative-cooling hat. 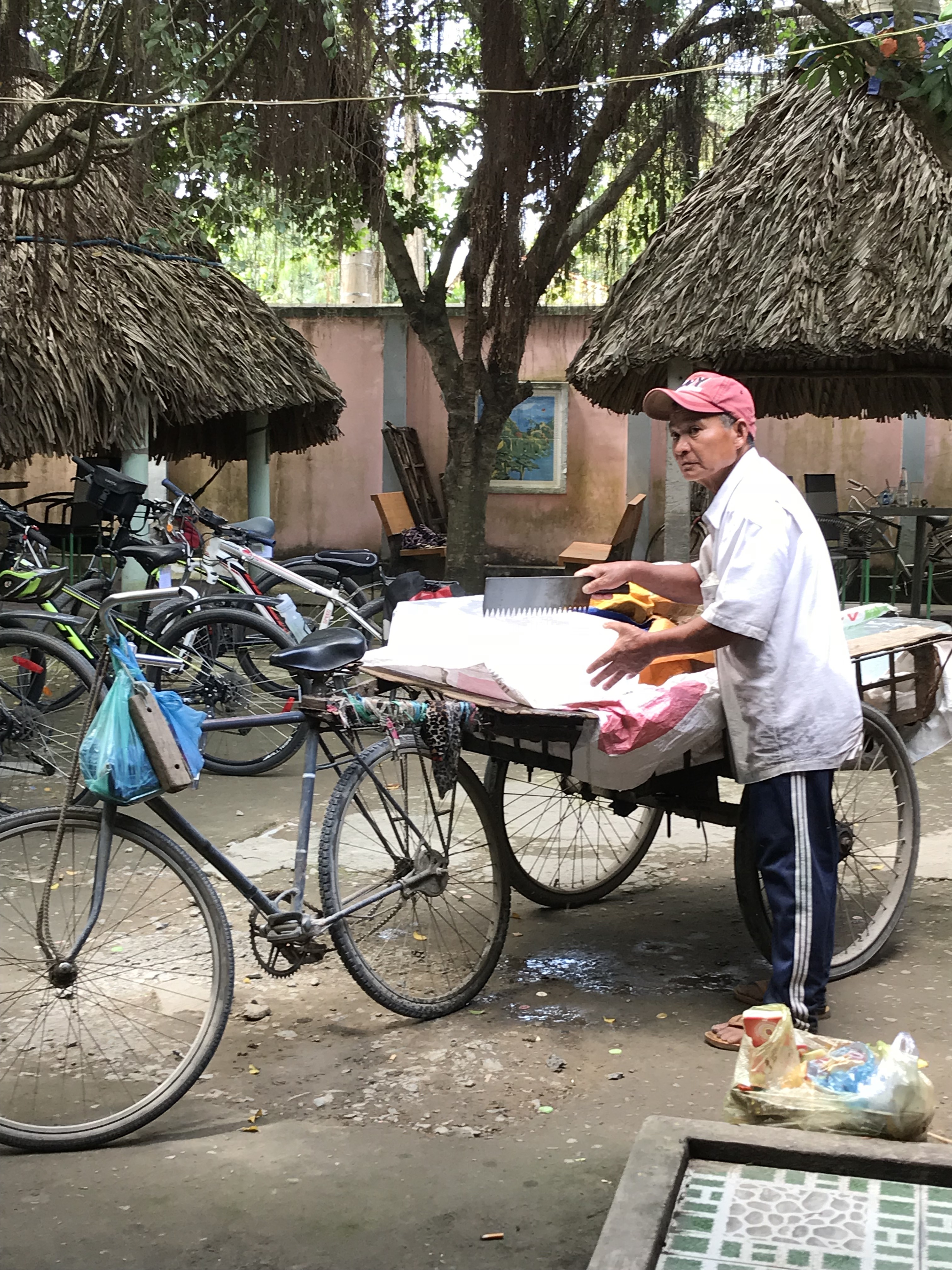 The iceman cometh and he will saw the ice block into smaller bits fitting into coolers. 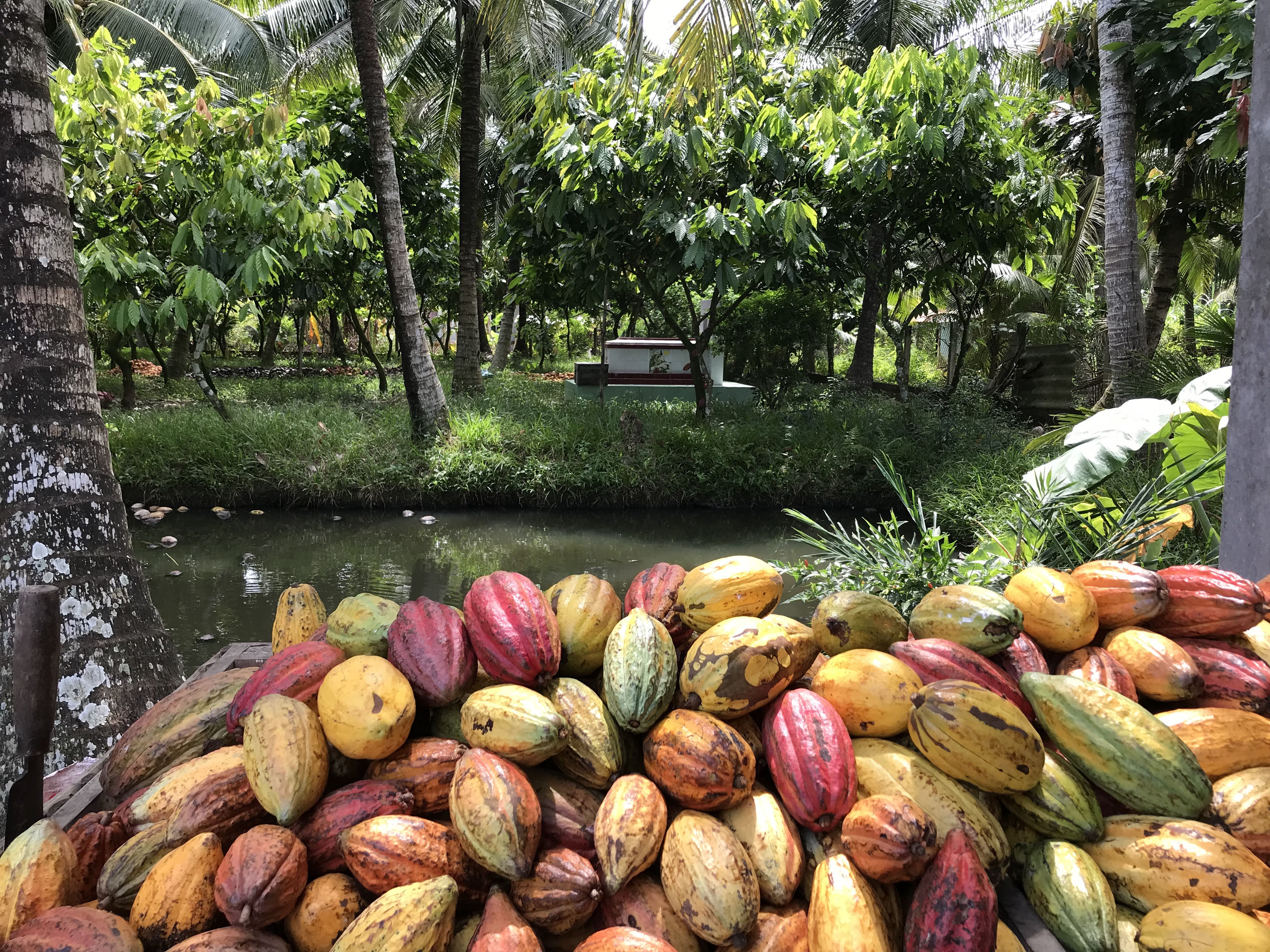 Yen took us to a small cacao farm. Aren’t these pods beautiful?! 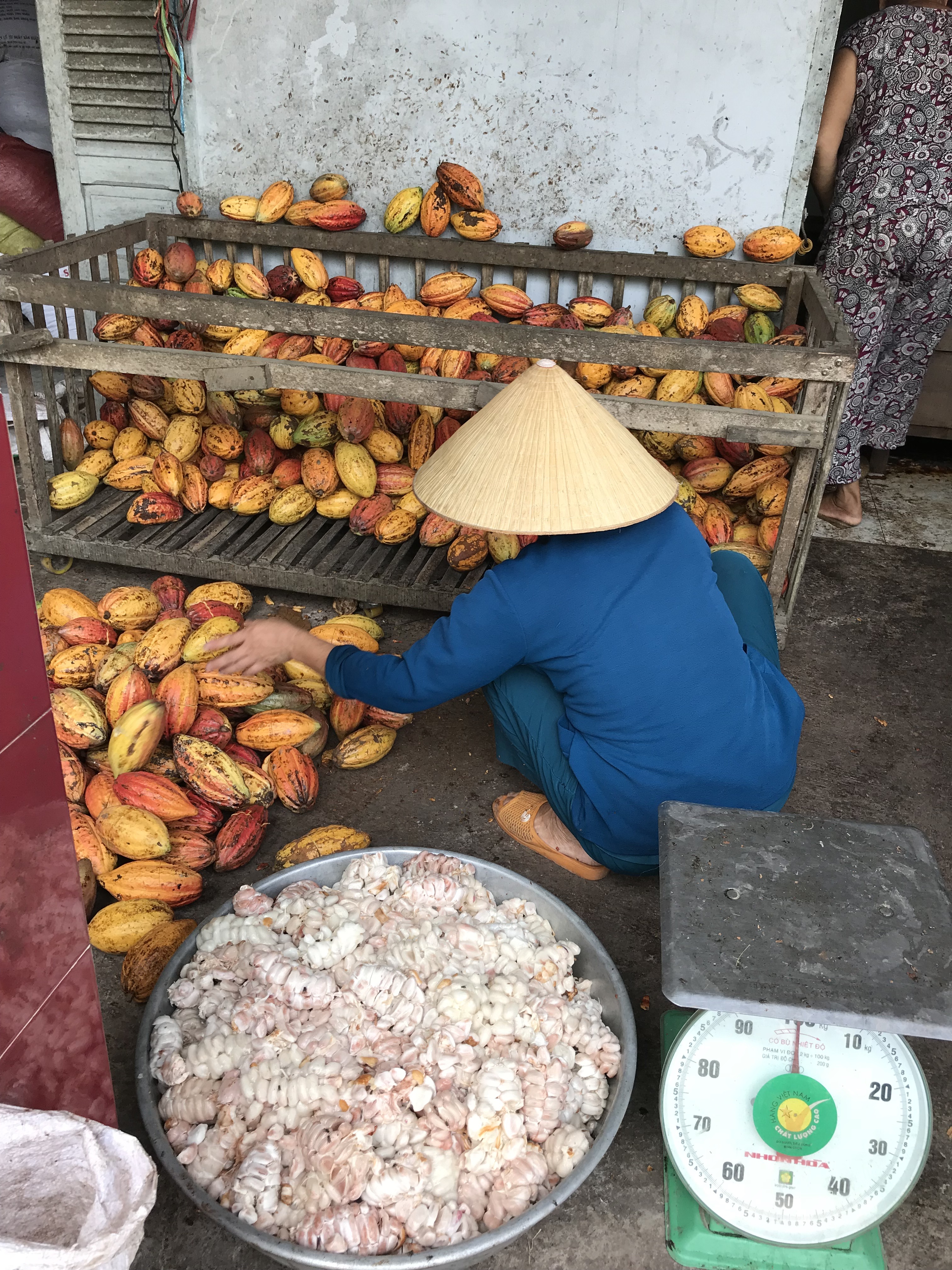 The cacao is supplied to Marou Chocolat. Marou works closely with farmers who are passionate about cacao, whose hard work is making Vietnam one of the most exciting new producers of cacao in the world.

In 2016 Vietnam was recognized as a fine-flavored origin for cacao seekers because Vietnam is producing distinct and spicy beans.

This farmer also produced cacao wine which we all had a shot of. It tasted like a strong sherry and on another hot day, was a great kick to get us back into gear. 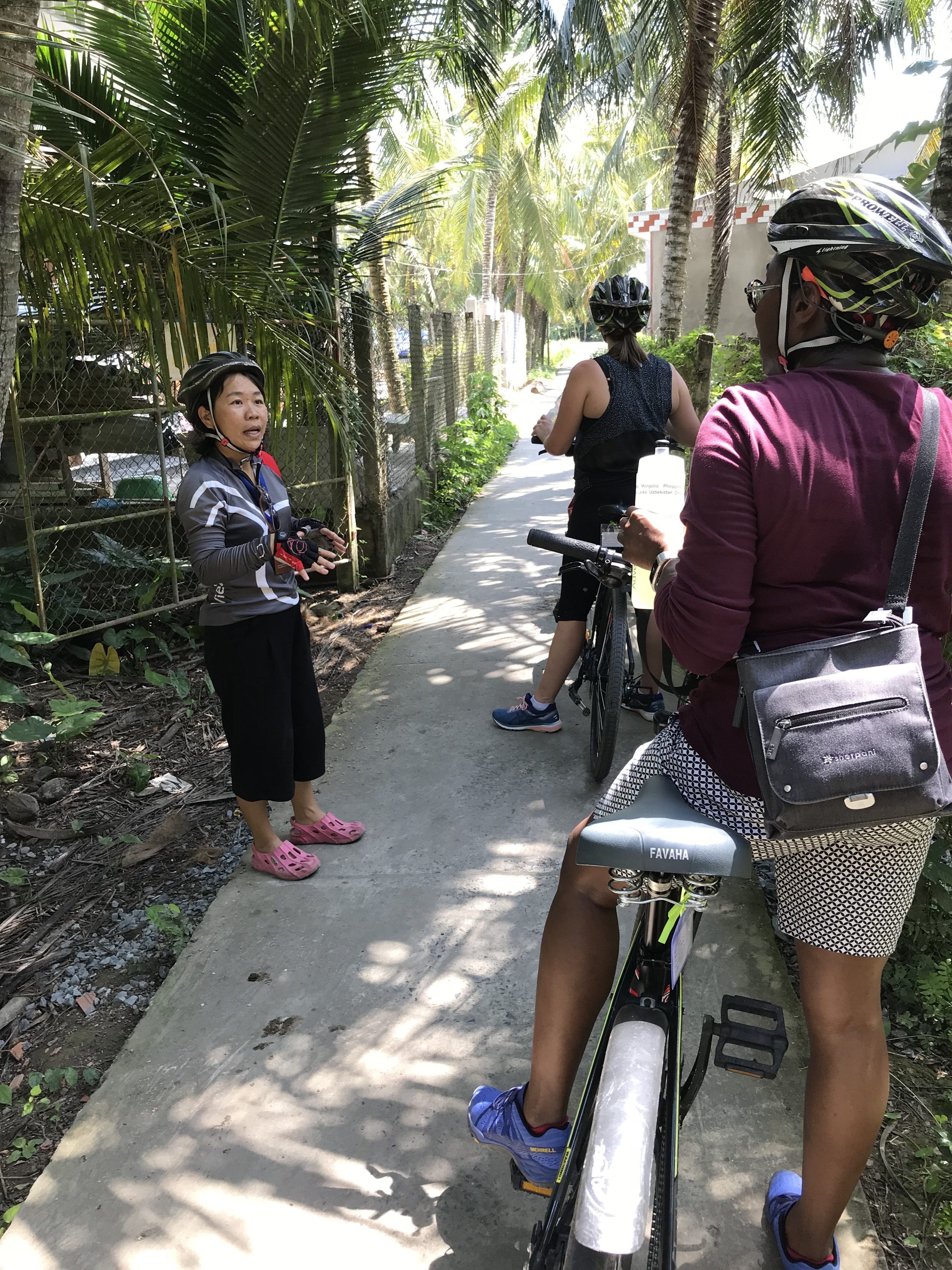 Yen on the trail sharing with us some stories about the areas. If you notice there is a gate which is a way to keep infidels like us out. (kidding) 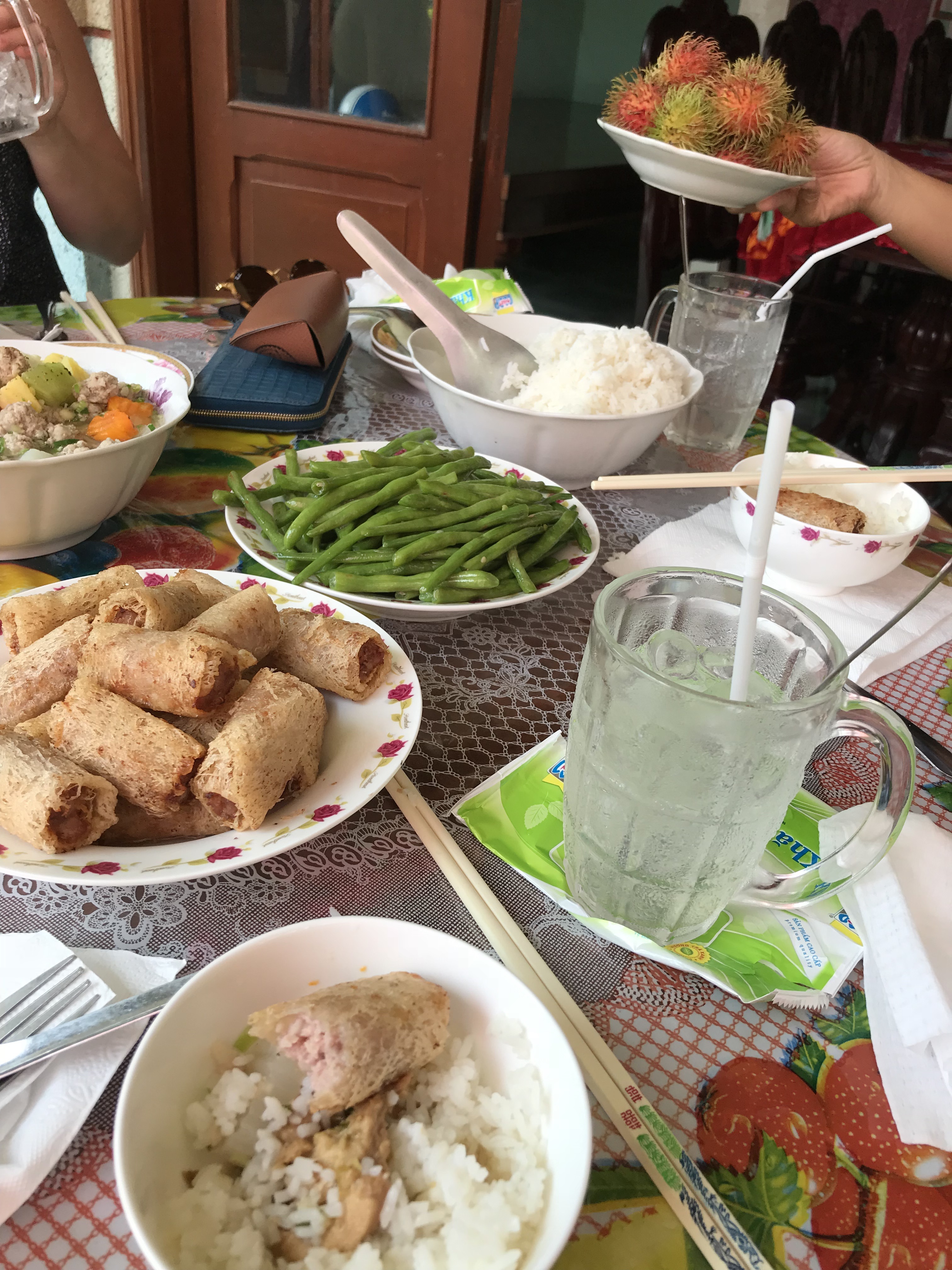 Lunch was so good!!! I ate most of that bowl of green beans myself!!

We rolled into a market which is open 24/7 and so we saw a number of vendors having a nap while it was quiet. 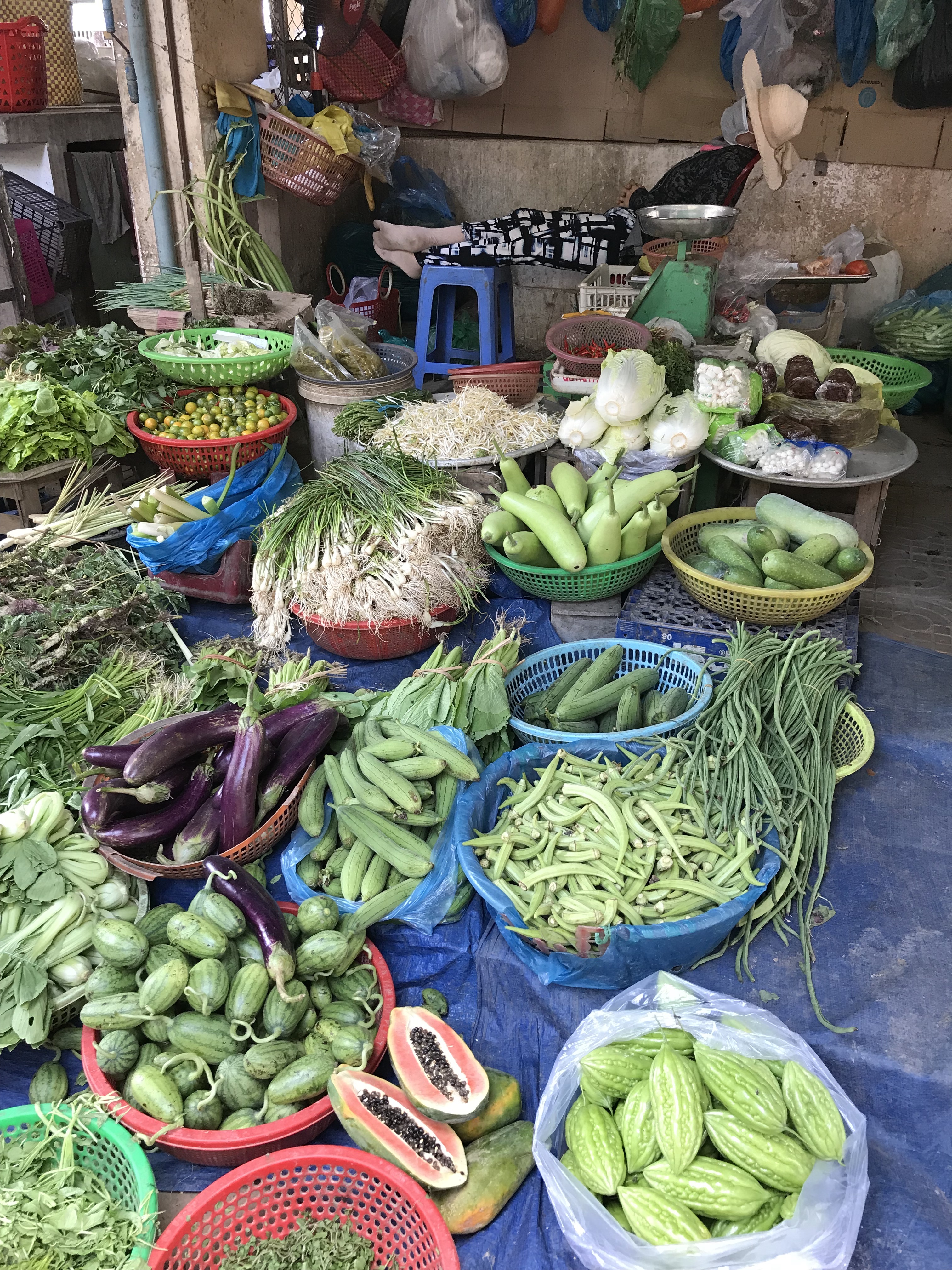 The Mekong Delta region is one of the best cycling locations in the whole of Vietnam due to its quiet back roads, friendly people and stunning scenery. 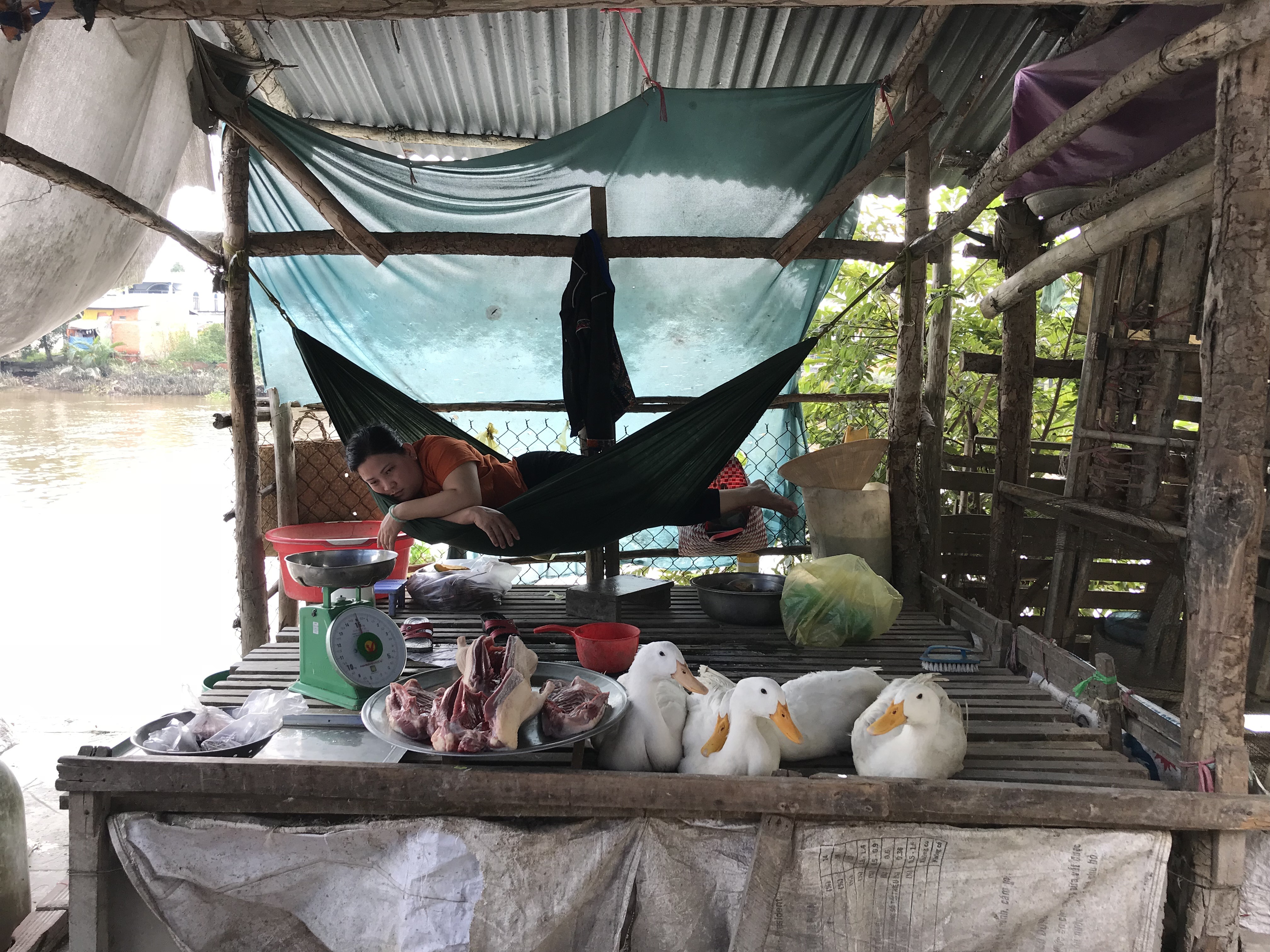 Our tour with Yen concluded with a fresh coconut while being transported by boat to our van. 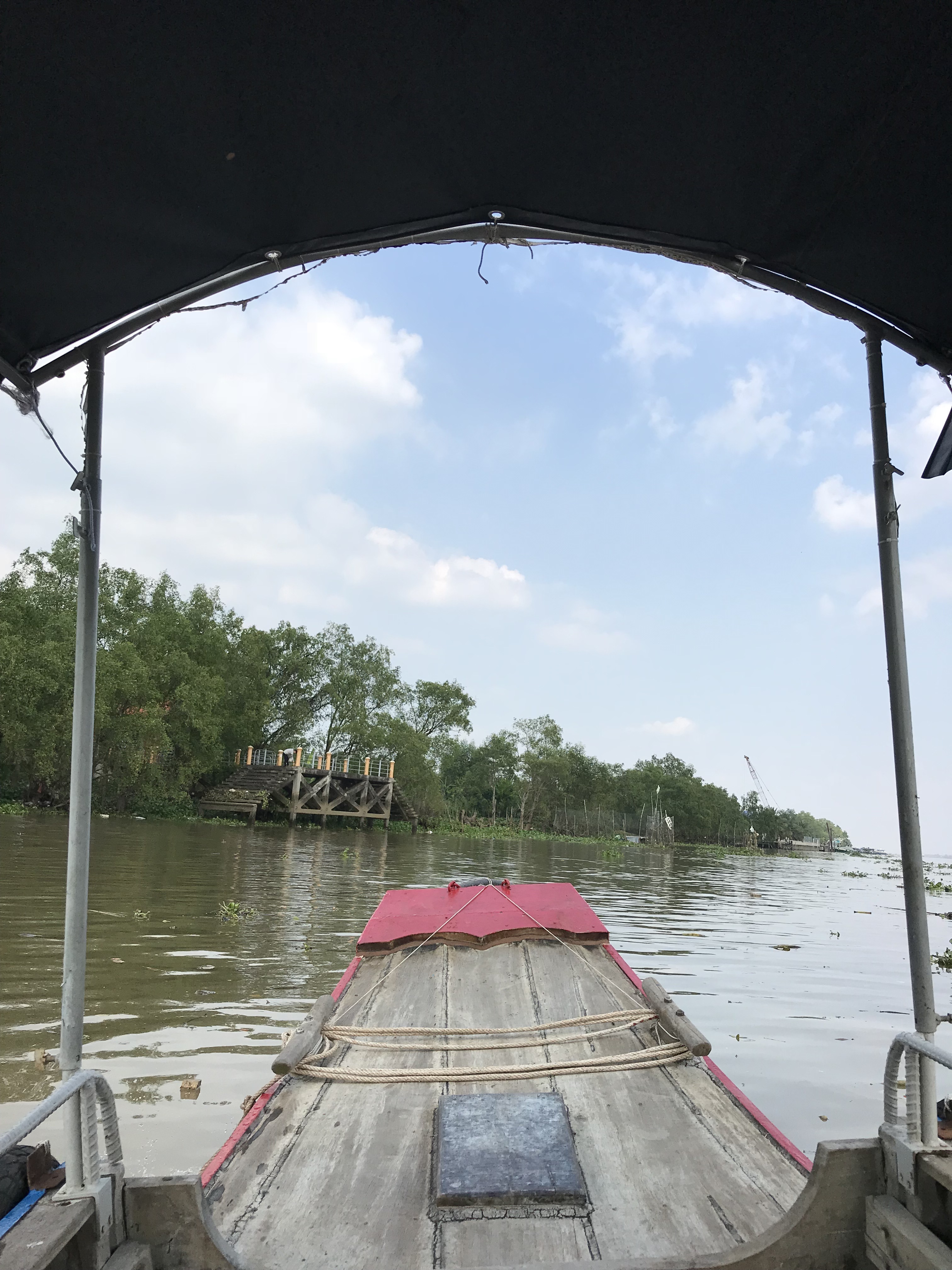 Natural coconut water contains five key electrolytes: sodium, potassium, calcium, magnesium, and phosphorus. Coconut water is packed with potassium, more than found in one banana or 15 sport drinks!! This naturally refreshing drink in its own container never tasted so good.

Le Spa des Artists Saigon has a steam room with a big window and delivered the most AHsome three hour package called the BEAUTY JOURNEY for 190 minutes of zen. The $2,850 VND included tax and s/c translating into a mere $158 CAD.

It was extremely peaceful with gentle tones of relaxing music combined with the soothing décor. Simply luxurious - from the silky soft bathrobes to the most comfortable spa bed and the very friendly team who gave the most exquisite experiences throughout the whole treatment process. I left the room after the massage, scrub and facial floating. They provided a lemon water and pieces of sugared ginger. I spent five hours there with the steam to start and then just tried pull myself together afterwards. 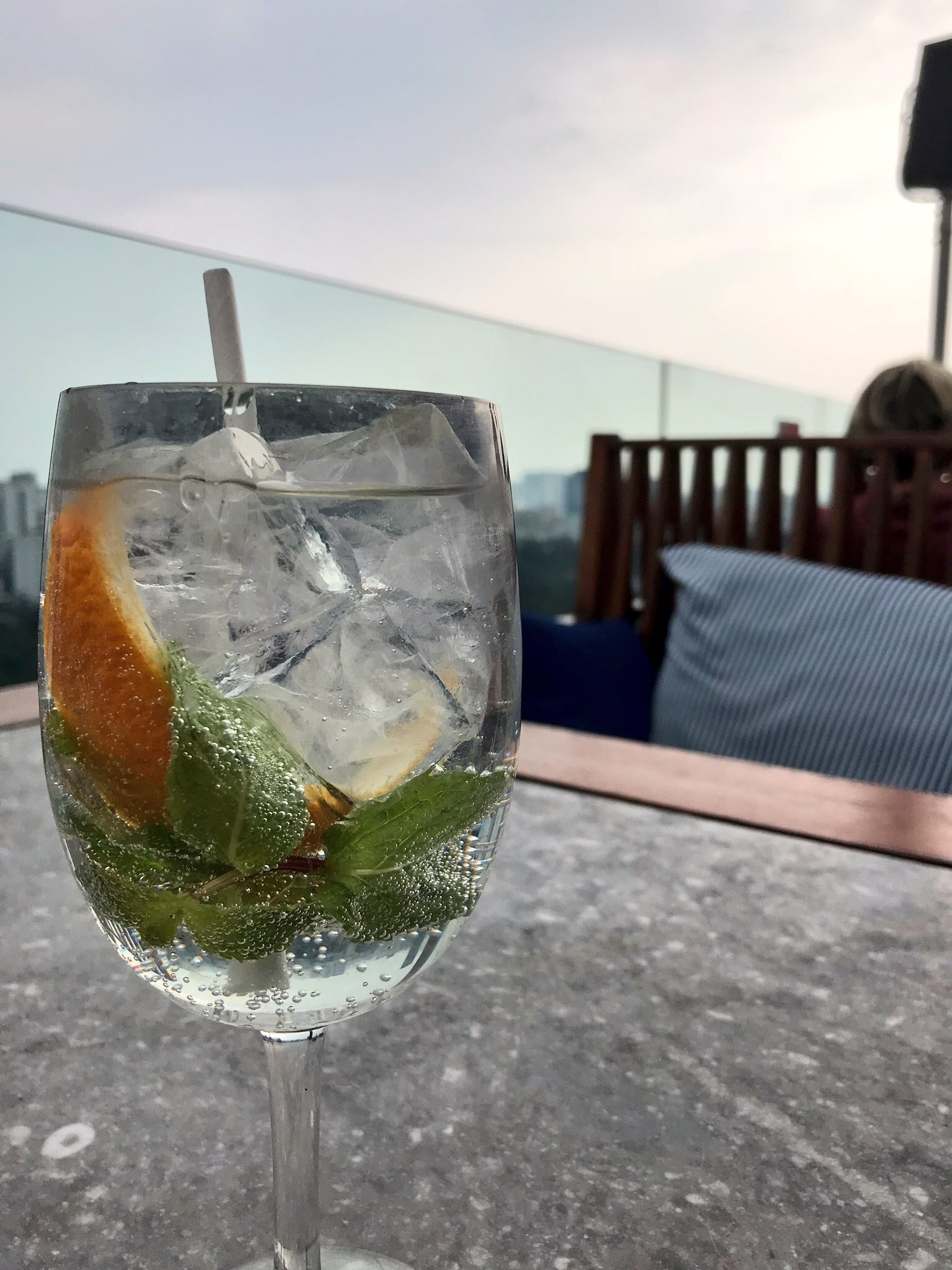 A visit to the roof top bar of the hotel was in order on this day of pampering. The Social Club Above Saigon delivered an amazing view and the perfect Bombay Gin cocktail.

I finished the day at the OPERA HOUSE in Saigon which was built in 1898. OA Show was anti-climatic after the spa treatment but the perfect ending to a week before the Big Build which I will write about separately.

Will I return to Vietnam a third time in my life?

I would NOT say no. 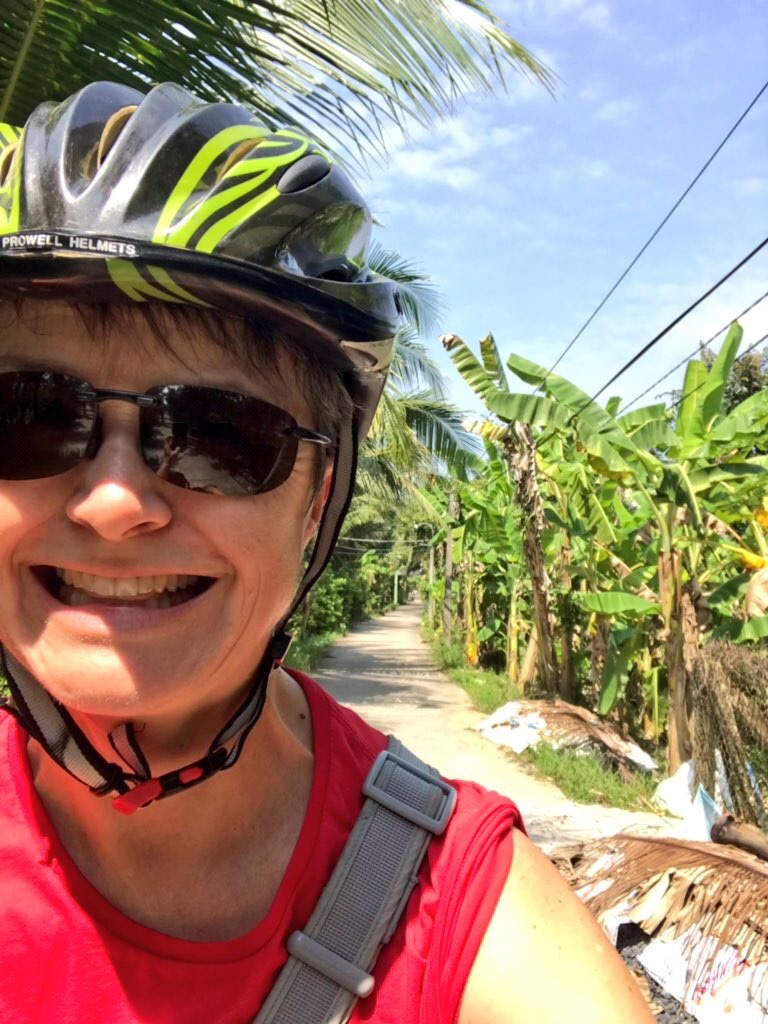